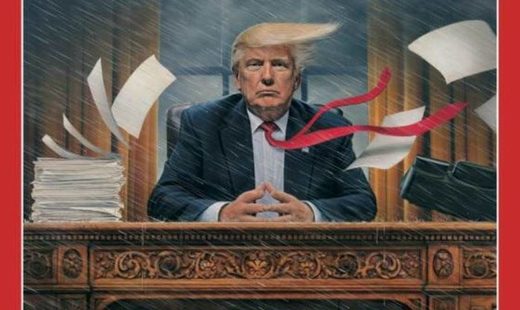 Not long ago, few Americans of the thinking persuasion might have imagined that such a well-engineered republic, with its exquisite checks and balances, sturdy institutions, and time-tested traditions would end up as so much smoldering goop in a national dumpster fire, but such is the sad state-of-the-union moving into the fateful summer of 2019. The castle of the permanent bureaucracy is about to be torched by an uprising of deplorable peasants led by a Golden Golem made furious by relentless litigation. It’s Game of Thrones meets the Thermidorian Reaction with a Weimar-flavored cherry on top – really one for the ages!

There’s perhaps a lot to dislike about Donald J. Trump, US President No. 45. Despite all the grooming and tailoring, there’s little savoir faire there. He tweets not like a mellifluous songbird, but in snorts like a rooting aardvark. His every predilection is an affront to the refined Washington establishment: his dark business history, his beloved ormolu trappings, his Mickey-D cheeseburgers, the mystifying hair-doo.

Even so, the bad faith of his antagonists exceeds even Mr. Trump’s defects and vices. The plot they concocted to get rid of him failed. And, yes, it was a plot, even a coup. And they fucked it up magnificently, leaving a paper trail as wide as Interstate-95. Now all that paper is about to fall over the District of Columbia like radioactive ash, turning many current and former denizens of rogue agencies into the walking dead as they embark on the dismal journey between the grand juries and the federal prisons.

Hence, the desperate rage of the impeachment faction, in direct proportion to their secret shameful knowledge that the entire RussiaGate melodrama was, in fact, a seditious subterfuge between the Hillary Clinton campaign and a great many key figures in governmentup-to-and-including former president Barack Obama, who could not have failed to be clued-in on all the action. Even before the declassification order, the true narrative of events has been plainly understood: that the US Intel “community” trafficked in fictitious malarkey supplied by Mrs. Clinton to illegally “meddle” in the 2016 election.

Most of the facts are already documented. Only a few details remain to be confirmed: for instance, whether international man-of-mystery and entrapment artist Josef Mifsud was in the employ of the CIA, and/or Britain’s MI6, and/or Mrs. Clinton’s Fusion GPS contractor (or Christopher Steele’s Orbis Business Intelligence company, a subcontractor to both Fusion GPS and the FBI). Questions will now be asked – though not by The New York Times.

The evidence already public indicates that Robert Mueller must have known as early as the date of his appointment (and likely before) that the predicating evidence for his inquiry was false. After all, his soon-to-be lead prosecutor, Andrew Weissmann, was informed of that in no uncertain terms by his DOJ colleague, Deputy Attorney General Bruce Ohr, in 2016. Justice may seek to know why Mr. Mueller did not inform the target of his inquiry that this was so. The answer to that may be that Mr. Mueller’s true mission was to disable Mr. Trump as long as possible while setting an obstruction of justice trap – which also failed tactically.

Notice that Mr. Mueller declined to testify before the House Judiciary Committee last week. Chairman Jerrold Nadler (D-NY) was a fool to invite him. Did he not know that minority members of his committee get to ask questions too?

Jerry Nadler (left) and Robert MuellerIn an interesting turn of the screw last week, polling showed that a majority of those asked were in favor of investigations into the origin of the RussiaGate story. The FBI, being an agency under the direct supervision of the Attorney General, will be hosed out for sure. The CIA, on the other hand, has a sordid history of acting as a sovereign state within the state – hence the derivation of the Deep State. They are renowned for protecting their own. Remember, the Senate Minority Leader, Mr. Schumer, snidely told the incoming President Trump at the get-go that the Intel community “has six ways from Sunday at getting back at you.” I guess we’ll finally get to see about that because the CIA’s former director, the wicked Mr. Brennan, is grand jury bound. I suspect he will not be protected by his former colleagues. His downfall may presage a more thorough cleanup, and perhaps a major reorganization, of this monstrous agency.

Former CIA Director John BrennanThe indictment of Julian Assange adds a big wrinkle to these upcoming proceedings. Apart for what it means to First Amendment protection for a free press (no small matter), Mr. Assange is the one person who actually knows who handed over the “hacked” DNC emails to Wikileaks. Perhaps getting the answer to that question is the real reason that the DOJ is throwing the book at him. The trial of Mr. Assange is sure to be a humdinger.

Comment: Or not. None of the 17 counts Assange is charged with have anything to do with the DNC or Russiagate. They are all focused on the leaks facilitated by Chelsea Manning, exposing US war crimes committed during the Iraq War. It would be a bait-and-switch of monumental proportions to shift the focus of Assange’s trial towards the Obama administration’s nefarious doings. Don’t count on it.

‘Collateral Murder’: It’s been 10 years since we first saw Wikileaked video of infamous airstrike that exposed US cover-up

I’m convinced, personally, that all this melodrama will play out against the background of a cratering global economy, tanking financial markets, and epic disruption of the established international order. Consider laying in some supplies.