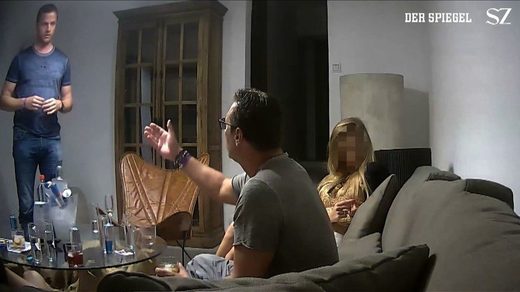 The ‘Russian oligarch’s niece’ at the center of the corruption scandal that brought down the Austrian government was actually a Bosnian student paid to set up the then-vice-chancellor, an Austrian tabloid claims.

Austria’s government collapsed on Monday after a no-confidence motion in parliament ousted Chancellor Sebastian Kurz from power. The scandal began two weeks earlier, however, when German media published a secretly recorded video showing former vice-chancellor Heinz-Christian Strache discussing an illicit deal with a woman purporting to be the niece of a Russian tycoon.

In the video, shot in Ibiza in 2017, the woman plies Strache with alcohol, and according to Austrian tabloid Krone, harder drugs to “loosen his tongue.” She then offers to buy a 50 percent stake in the country’s Kronen Zeitung newspaper and switch its editorial position in favor of Strache’s Freedom Party (FPO). Strache offered the woman business contracts in Austria in exchange for favorable coverage, media reported.

Despite the spy-movie premise, the woman in the starring role was reportedly not the Russian heiress she claimed to be. A report by Kronen, published Monday, claims that she was a Bosnian agricultural science student, and was paid up to 7,000 euros for her acting skills.

Citing investigator Gert Schmidt, the tabloid revealed that the woman spoke four languages, including perfect Russian, and was the kind of blond beauty “who interests Mr. Strache.” The paper states that the Ibizan villa the video was shot in was already bugged and had previously been used for “other covert operations.”

Who set it up?

The funders of the sting operation are still unknown, although Schmidt suspects disgruntled liberal politicians who would stop at nothing to keep Strache’s FPO and outgoing Chancellor Sebastian Kurz’s Austrian People’s Party (OVP) out of power, and were willing to pay 600,000 euros for the footage. Strache has called the sting “a honey trap stage-managed by intelligence agencies,” but no proof of any agency’s involvement exists.

The paper claims that a Vienna-based lawyer, Ramin Mirfakhrai, put Strache in touch with the femme fatale. Mirfakhrai confirmed his involvement, but described the operation as a “civil society-driven project in which investigative-journalistic approaches were taken.” Strache, on the other hand, called it a “targeted political assassination.”

Der Spiegel and the Süddeutsche Zeitung – the German papers that revealed the video – have refused to comment on the tape’s origins in order to protect their sources. Both Strache and Kurz have suggested that a shadowy Israeli political consultant, Tal Silberstein, may have orchestrated the setup. Silberstein had previously worked with Austria’s left-wing Social Democrats (SPO) in 2017 to discredit Kurz’s bid for power, and for the party in 2002. A kind of Israeli Roger Stone character, Silberstein also consulted with Bolivia’s Gonzalo Sánchez de Lozada in 2002, advising the strongman to “start negative campaigns” about his left-wing opponent Evo Morales.

While obviously a well-planned attack on Strache, and by extension Kurz, the video surfaced at a convenient time for the European establishment. It is unlikely a coincidence that the team that made the video sat on such scandalous footage for almost two years, especially if the goal was simply to dislodge Kurz and Strache from power.

Released less than two weeks before last weekend’s European Parliament elections, the tape was likely a calculated blow against the OVP and FPO’s chances in the vote, and against the European right more broadly. Linking the emergent right wing to Moscow could be an effective strategy, what with themes of ‘election meddling’ and ‘Russian interference’ bandied around by the media across the continent.

The media bought it, with pundits panicking over the Russian plot to “destroy the free press” and sounding the alarm on how the European right is “secretly on the take from Russia.” The Kremlin denied any knowledge of the starring woman, and her billionaire ‘uncle’ came forward to say he had no family links to her and was “an only child.”

With elections over, the woman’s true identity is now a side note. However, if the intent was to discredit the European right, the plan could be considered a failure. Nationalist and right-wing parties delivered a good performance across Europe, helping defeat the combined majority of the European Parliament’s center-right EPP and center-left S&D blocs.

In Austria, though Kurz faces an uphill battle to regain power in September’s snap election, the OVP surged to victory on Sunday, taking 35 percent of the vote. Even the FPO, rocked by the tape scandal, lost only two percent, taking 17 percent of the vote.