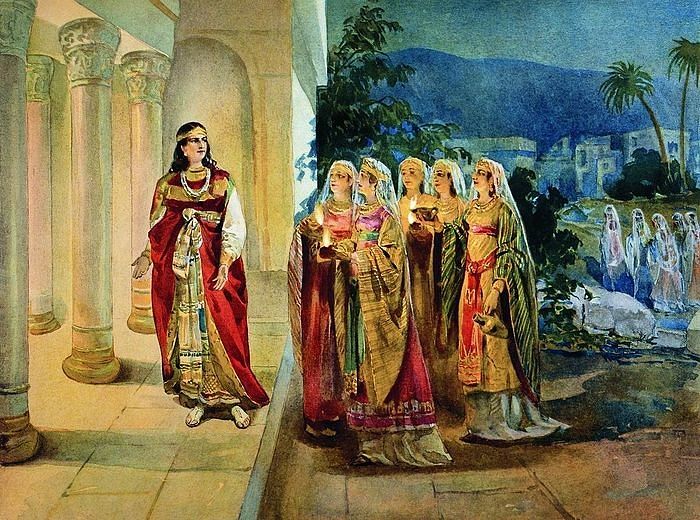 This passage is from St. Seraphim of Sarov’s conversation with Nicholas Motovilov in which he interprets the parable of the ten virgins:

In the parable of the wise and foolish virgins, when the foolish ones ran short of oil, they were told: “Go and buy in the market.” But when they had bought it, the door of the bride-chamber was already shut and they could not get in. Some say that the lack of oil in the lamps of the foolish virgins means a lack of good deeds in their lifetime. Such an interpretation is not quite correct. Why should they be lacking in good deeds, if they are called virgins, even though foolish ones? Virginity is the supreme virtue, an angelic state, and it could take the place of all other good works.

I think that what they were lacking was the grace of the All-Holy Spirit of God. These virgins practiced the virtues, but in their spiritual ignorance they supposed that the Christian life consisted merely in doing good works. By doing a good deed they thought they were doing the work of God, but they cared little whether they acquired the grace of God’s Spirit. These ways of life, based merely on doing good, without carefully testing whether they bring the grace of the Spirit of God, are mentioned in the patristic books: “There is another way which is deemed good in the beginning, but ends at the bottom of hell.”

Anthony the Great in his letters to monks says of such virgins: “Many monks and virgins have no idea of the different kinds of will which act in man, and they do not know that we are influenced by three wills: the first is God’s all-perfect and all-saving will; the second is our own human will which, if not destructive, neither is it saving; and the third will is the devil’s will—wholly destructive.” This third will of the enemy prompts man to do any no good deeds, or to do them good out of vanity, or merely for virtue’s sake rather than for Christ’s sake. The second, our own will, prompts us to do everything to flatter our passions, or else it teaches us like the enemy, to do good for the sake of good and not care for the grace which is acquired by it. But the first, God’s all-saving will, consists in doing good solely to acquire the Holy Spirit, as an eternal, inexhaustible treasure which is priceless. The acquisition of the Holy Spirit is, in a manner of speaking, the oil, which the foolish virgins lacked. They were called foolish just because they had forgotten the necessary fruit of virtue, the grace of the Holy Spirit, without which no one is or can be saved, for: “Through the Holy Spirit every soul is quickened and through purification is exalted and illumined by the Triune Unity in a Holy mystery.”

The oil in the lamps of the wise virgins could burn brightly for a long time. So these virgins, with their bright lamps were able to meet the Bridegroom, who came at midnight. With Him, they could enter the bridal chamber of joy. But the foolish ones, though they went to market to buy more oil, when their lamps were going out, were unable to return in time, for the door was already shut. The market is our life; the door of the bridal chamber, which was shut and barred the way to the Bridegroom is human death; the wise and foolish virgins are Christian souls; the oil is not the good deeds, but the grace of the All-Holy Spirit of God which is obtained through good deeds and which changes souls from one state to another—such as, from a corruptible state to incorruptible state, from spiritual death to spiritual life, from darkness to light, from the stable of our being (where the passions are tied up like dumb animals and wild beasts) into a temple of the Divinity, the shining bridal chamber of eternal joy in Christ Jesus our Lord, the Creator, Redeemer and eternal Bridegroom of our souls.