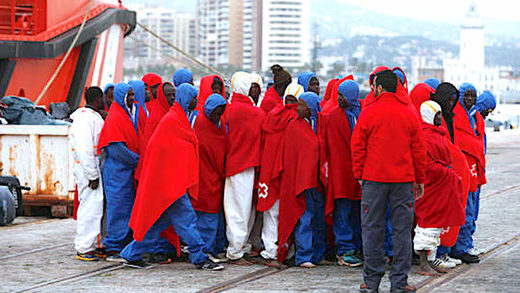 The leader of the Spanish far-right party, Vox, is taking a page from Donald Trump’s immigration policy, by calling for a wall to stop an influx of immigrants coming into the country and wanting someone else to pay for it.

Santiago Abascal iscallingfor “insurmountable walls” to be built along Spain’s borders to stop the “wave of illegal immigrants” coming from North Africa to “blackmail the European Union,” and claims Morocco should foot the bill.

The politician put forward the proposals in his recently published book, while also calling for the army to be deployed and given “the necessary orders” to defend the borders in Ceuta and Melilla – the two entry points into Spain from the North African coast -until the wall is erected.

Abascal said he also wants to build a “psychological wall” against illegal immigration across Europe. The 42-year-old claims the mental wall would consist of “informing immigrants that those who enter illegally in Europe will never be able to regularize their situation nor will they have the right to stay, nor will they have social assistance, nor will they be given a health card.”

Furthermore, Abascal said he wants to stop NGOs from helping migrants that gain entry to the country and prevent the organizations from rescuing people when they get into trouble at sea. He went on to accuse the NGOs of collaborating with the mafia to rescue people from the African coast for “human trade.”

The Vox party is gaining popularity in Spain for its harsh stance on gun laws, abortion, same-sex marriage, illegal immigration and “radical feminism.” Polls suggest it will be the first far-right party to win seats in Spanish parliament since the late 1970s in next month’s general election.