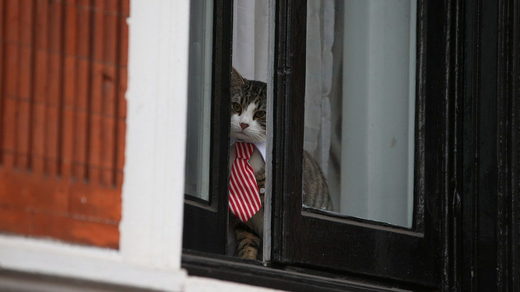 The “demented” stories about Julian Assange’s spying cat and embassy antics are being spun by the top Ecuadorian officials to divert attention from his “disgraceful expulsion” from asylum, WikiLeaks editor Kristinn Hrafnsson said.

An exclusive story, revealing spurr-ious details about Assange’s stay at the Ecuadorian Embassy in London was spun by Daily Mail on Friday. The piece has since raised quite a few eyebrows with its bold but unfounded claims, including some quite outlandish statements by the Ecuadorian ambassador.

Among other things, Ecuador’s UK Ambassador Jaime Marchan brought up the pawsibility Assange’s famous Embassy Cat might have been up to something dodgy, claiming the whole diplomatic mission was wary of the critter.

“It could go in every room – we were suspicious it may carry a device … to spy on us,” the diplomat said.

Many of those not feline good about such an assumption accused Ecuador of waging a vicious smear campaign against Assange and his pet. The WikiLeaks editor-in-chief, Kristinn Hrafnsson, alleged the rumor spreading is aimed at diverting attention from the “disgraceful expulsion” of the whistleblowing website’s founder from the diplomatic mission.

The radiclaw remark caused a storm of online mockery, with some going as far as suggesting the Ecuadorian officials should seek mental help – and keep off the pop culture.

Some said Ecuador have finally found a resolve to blame the cat for “counterpurrveillance” in the wake of the 2016 embassy intruder incident. After all, the cat’s Twitter account bragged about testing a dimeownitive infra-red camera back then.

Others took the allegations a bit more seriously, recalling unsuccessful experiments – held by CIA – to turn cats into living surveillance devices. Unfurtunately for the spooks, felines turned out to be way too independent and unpredictable to be bothered with boring government work.

Other claims produced by Ecuador included allegedly poor hygiene on Assange’s behalf, his reluctance to wash dishes, loud music and skateboarding within the embassy hall at night – overall, if the staff is to be believed, the WikiLeaks co-founder had been behaving like a rowdy teenager.

As for Embassy Cat, which Assange sent away in November, its exact whereabouts have remained unknown, sparking numerous concerns and theories. But in a pawsitive update on Saturday, WikiLeaks revealed that the “whiskerblower” was safe and sound. To confirm, they uploaded a clip of the cat watching Ruptly’s footage of its owner being dragged out of the Ecuadorian embassy and shouting “UK must resist.”