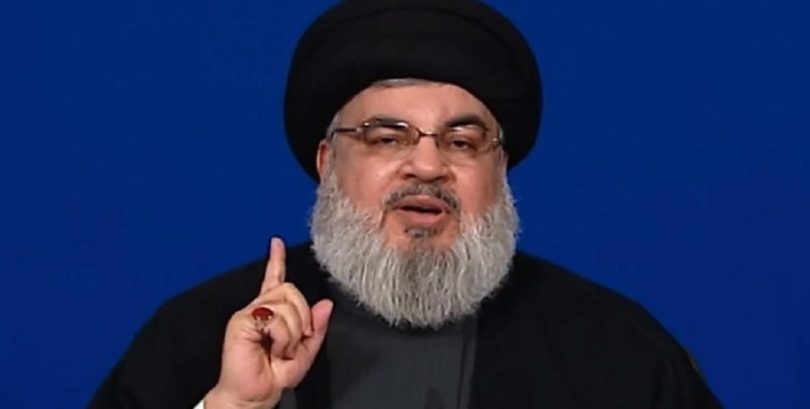 Hezbollah warns that the United States could next choose to recognize Israel’s “sovereignty” over the Tel Aviv-occupied West Bank unless the Arab world springs to action.

“When the entire world allows [US President Donald] Trump to declare [Jerusalem] al-Quds as Israel’s eternal capital, and especially the Arab world remains silent, this opens the way for all US violations,” he said.

“When institutions and International laws fail to serve the American agenda and their interest, they just simply disregard it in all disrespect, and what is called ‘the international community’ is not able to protect any right of the people whatsoever, including land ownership and sovereignty, taking back conquered land like what happened in Golan or what happened before that in (Jerusalem) al-Quds,” Nasrallah said.

Trump recognized the holy city, which the Israeli regime occupied as part of the Palestinian territory of the West Bank during a war in 1967, as Israel’s “capital” in late 2017. On Monday, the US president took his second most controversial pro-Israeli action during his tenure by recognizing the regime’s “sovereignty” over Syria’s Golan Heights. Tel Aviv occupied the latter territory during the same war.

“We must expect Trump to recognize Israeli sovereignty over the West Bank,” Nasrallah added.

He said such a potential move “is part of the deal of the century,” referring to an under-wraps Washington proposal for the Israeli-Palestinian conflict, which reportedly includes outrageous violations against Palestinians’ historical demands.

“They can say the Palestinian people can go and live in Gaza,” the Hezbollah chief said, envisioning expulsion of Palestinians from the West Bank as part of the US plan.

He urged the Arab world to resort to what “conscience” it had left by preventing these prospects.

The Arab League, Nasrallah proposed, should use its upcoming summit in Tunisia to withdraw the so-called Arab peace initiative, proposed by Saudi Arabia in 2002, and instead press for more negotiation.

The initiative offers normalization of ties between Israel and 22 Arab countries in return for Tel Aviv’s withdrawal from the West Bank.

US after ‘civil war’ in Lebanon

Separately, Nasrallah pointed to remarks made by US Secretary of State Mike Pompeo during a recent visit to Lebanon. Attending the Lebanese Foreign Ministry, the top diplomat urged that the Lebanese “face” Hezbollah and branded the group as an obstacle to realization of the Lebanese people’s dreams.

Nasrallah said his movement was in the service of Lebanon’s protection as has been the case during Israel’s several invasions of the country. Hezbollah rather upheld the Lebanese people’s dreams of retrieving the part of their land, which has been occupied by Tel Aviv, and eradication of corruption.

“Is Hezbollah standing in the face of these dreams? Or is Hezbollah part of the apparatus, which people pin their hopes on,” he asked.

The Hezbollah chief also referenced the US’s history of sowing instability, destruction, and bloodshed across the world through military invasion. By singling out the resistance group as the source of the country’s problems, the US is rather trying to pit the Lebanese people against each other and trigger a “civil war,” Nasrallah noted.

“He (Pompeo) is trying to incite us and wants the Lebanese people to shed each other’s blood. Pompeo is frustrated with the stability and peaceful coexistence in Lebanon,” he said.