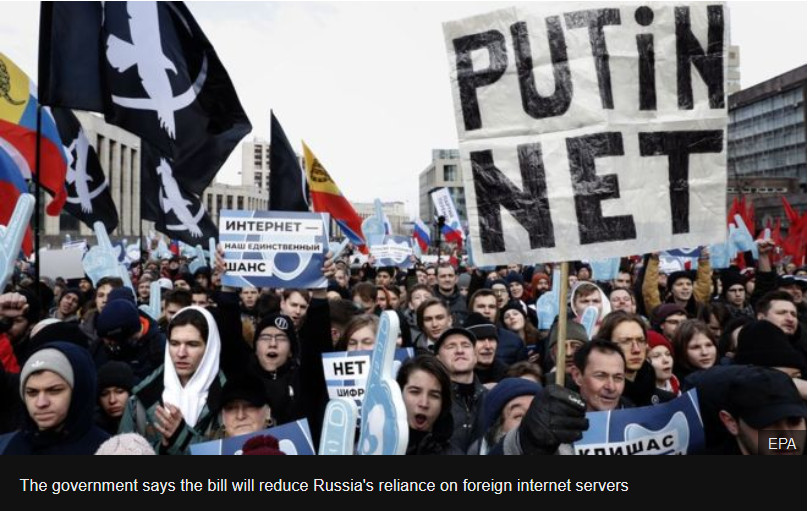 The Russian parliament is currently discussing a new law that will establish an autonomous internet in Russia. The network will no longer depend on servers and services hosted in other countries.

The U.S. dislikes that as shutting down Russia’s internet by manipulating servers in the U.S. will no longer be an option. Spying on Russian internet traffic will also become more difficult.

The usual ‘liberals’ in Russia were told to raise some protest against the planned move. The BBC reports:

Thousands of people in Russia have protested against plans to introduce tighter restrictions on the internet.

A mass rally in Moscow and similar demonstrations in two other cities were called after parliament backed the controversial bill last month.

The government says the bill, which allows it to isolate Russia’s internet service from the rest of the world, will improve cyber-security.

But campaigners say it is an attempt to increase censorship and stifle dissent.

Activists say more than 15,000 people gathered in Moscow on Sunday, which is double the estimate given by the police.

The rally gathered around 15,300 people, according to White Counter, an NGO that counts participants at rallies. Moscow police put the numbers at 6,500.

Reports of crowd numbers are used for propaganda purposes and often false. On February 22 the British oligarch Richard Brenson organized a concert in Cucuta, Colombia. While “authorities” in Colombia claimed that there were “over 400,000 people in attendance”, Vice News reported more than 300,000 and the Washington Post wrote that 200,000 were there. By using aerial pictures and scientific crowd density measurements we proved that less than 20,000 people attended the concert. Following that the Washington Post silently deleted its 200,000 claim.

The BBC provides two pictures with its piece.