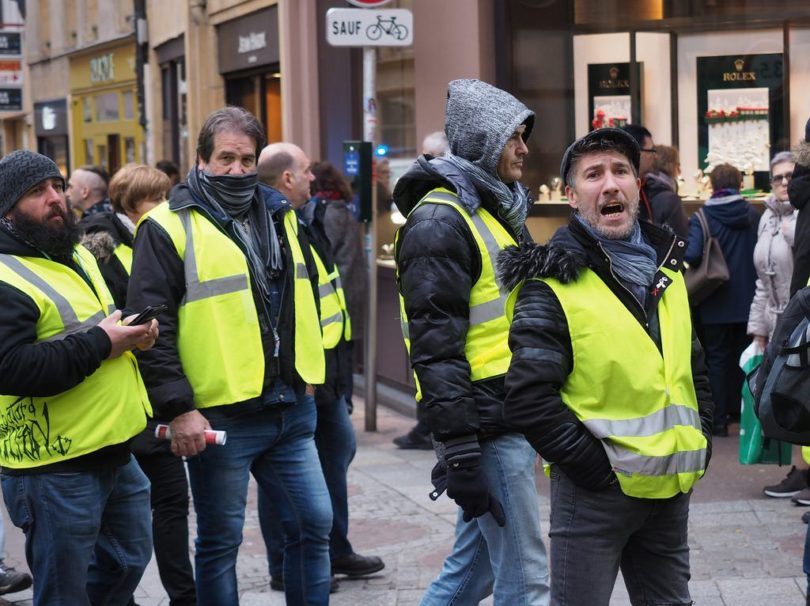 Cutting diplomatic relations and sending one’s ambassador back home are acts associated with declaring war, which is what makes France’s decision to pull their ambassador out of Rome very unusual to say the least. The rhetoric from the French side even gives off a sort of “pre-war” aroma declaring that the Italians have supposedly made “unfounded attacks” against French policy regarding migration and EU economics, but the main spark that lit the flame of this decision to call back the ambassador is related to Italian meddling in the “yellow vest” protests.

The wildly diverse and bloody yellow vest protests are continuing throughout France with no sign of stopping anytime soon. It is important to note that all protest movements including those with yellow vests are organized by “someone”. There has never been a time where 10,000 people randomly all chose to simultaneously go clean their local park. But with talented organizers and some marketing 10,000 can be swayed to show up and clean said park no problem.

The driving force(s) behind the yellow vest protestors seems to be either unknown to the public or so radically diverse (there are many different groups with very different beliefs who are all on the “yellow” side) that there is no single actor driving this movement across the country.

Of course, by default there have been accusations that Russia is behind the chaos. When in doubt (and in the West) always blame Russia and never your own anti-populist policies bringing ruin to one of the most prosperous nations on Earth.

At this point there is now an official boogeyman for France to blame and surprisingly it is not Russia, but Italy as Italian Deputy Prime Minister Luigi Di Maio has met and openly been photographed with key players inside the yellow vest movement.

This is threatening to the EU establishment because it fully legitimizes and gives support from within the EU family itself to the protestors who theoretically want to overthrow the French government. Furthermore, busy politicians do not just like to meet up with protestors for the selfies, but to achieve goals. From the French perspective it seems as though the Italians (through their pow-wow) have been able to reach some sort of agreement with the yellow vests for something in return for the “support” necessary to keep the protests going or push them to victory.

This is all very similar to when the murderer’s row of Western politicians and bureaucrats descended on the Maidan protests happening in Kiev in 2013-2014. People like the late John McCain directly sent their message that they “are here to support your just cause”. Not only did this embolden the protestors to have the EU and US on their side but there was also direct coordination of a post-Maidan Ukraine going on behind the scenes. The zenith of this covert coordination being like the famous Nuland-Pyatt (“F the EU”) phone call where Assistant Secretary of State Victoria Nuland and the US Ambassador to Ukraine, Geoffrey Pyatt basically laid out what the power structure of things was going to look like after the revolution and not surprisingly reality matched up with this phone call rather nicely.

This is why Italian “support” is a very worrying event for France and the EU status quo in general, because without backing from Washington and $5 billion for “democracy” the Maidan would have never have succeeded. Human beings require food and shelter, this is why many protest movements die. The government can simply outlast any protestors who just passively stand around with signs. Eventually they will get tired and hungry and just give up like the #OccupyWallStreet protests which swept across America but eventually fizzled out. Sleeping outside for months with no hope of victory is not a strategy for success.

When protesting becomes professional with funding from various NGOs and grants it is possible to keep the protest going on indefinitely as the organizers are essentially “going to work” every day.

Italy as an epicenter for EU skepticism may actually be willing to do whatever it takes to break apart the system while “there’s still time” for Italy to remain both Italian and relevant in any sort of fashion. One anti-EU color revolution could be enough to break the Lisbon Treaty nightmare that Italy is under. But then again the media is firmly in the hands of the pro-Brussels side so achieving a definitive color revolution may be impossible.

Since the populist Italian political forces don’t particularly hate Russia this means that for hardcore EU adherents that makes them obviously Kremlin trolls. No matter what actions the Italians make and no matter how independent those actions may (or may not) be, it is clear that Russia will get the blame again at some point later down the road.

For those in favor of the yellow vests this is your lucky day as official recognition and support gives them a much better chance of actually achieving something of value. For Russia, it is yet another crime to be accused of currently without any evidence.