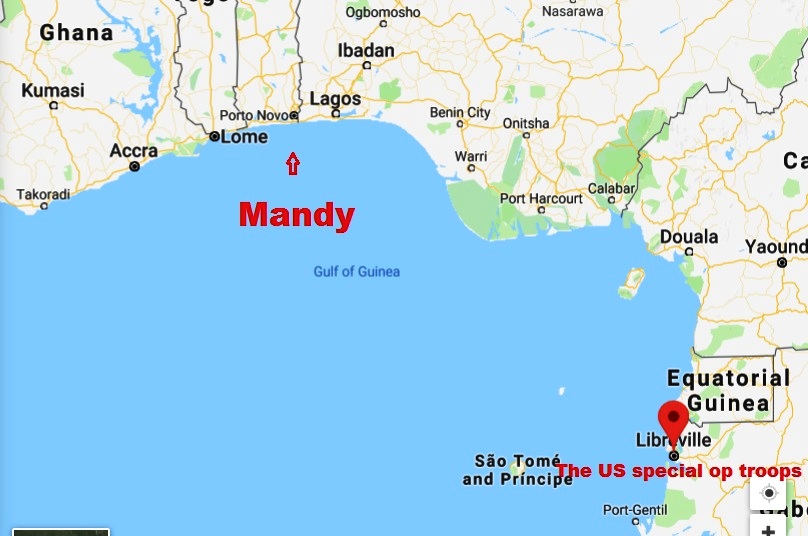 On January 2, 2019 at 0000 UTC 46,852 dwt MSC Mandy, a containership owned by the Mediterranean Shipping Company based in the UK was reportedly attacked by 7 or 9 “pirates” armed with the AK-47s and machetes, while the vessel was traveling at 19 knots speed 101 kilometers or 55 nautical miles off the coast of Benin passing a port of Cotonou, while it was traversing through the Gulf of Guinea.

The crew of Mandy, registered under the flag of Panama, was 26 people: 21 Russian citizens, 3 Ukrainian citizens and 1 Georgian citizens. Different sources give slightly different accounts, so this is what we know for now. After ransacking the ship for two hours looking for something, the “pirates” left the ship and took with them 6 hostages. All victims of this forced disappearance are Russian citizens. The “pirates” weren’t interested in the citizens of Ukraine and Georgia.

A spokesman for MSC Mediterranean Shipping Company confirmed to World Maritime News that “MSC quickly secured the vessel and its cargo and ensured the safety of the remaining seafarers on board,” They also refused to provide any detail. “Out of respect for the missing crew members and their families, MSC has no further comment for the time being.”

The first warning notice of the attack on the ship was issued by NATO’s Maritime Domain Awareness for Trade – Gulf of Guinea (MDAT-GoG).

AIS data provided by MarineTraffic shows that the 2,668 TEU ship, which was sailing from the port of Lome, Togo, is currently anchored off Lagos.

Ambrey calls itself “the leading, largest Private Maritime Security Company in the world.”  Its corporate website is embellished with generic stock images. http://www.ambrey.com They joined twitter in 2012. They published 83 tweets in seven years and attracted 216 followers.

Their tweet about the abduction of Russian crew was published at 4:17 AM in the UK, which was 7:17 AM in Moscow, Russia, and  11:17 PM January 1 in Washington.  They didn’t tweet about other cases of attacks on ships, so the question is, Why would Ambrey Ltd decide to report this particular incident?

The maritimebulletin gave some more details, but still keeping the information provided by the NATO.

“Jan 4 UPDATE: 24 crew includes 23 Russian and 1 Ukrainian seafarers. 7-9 pirates who boarded the ship, were armed with AK-47 and machetes, they ransacked the ship, robbed the crew and took 6 hostages with them when leaving the ship: Master; Chief Officer, 3 Officer, bosun, fitter and cook. Replacement of kidnapped crew is to take place at Cotonou, Benin.”

“Jan 4: Container ship MSC MANDY was attacked by pirates at 0000 UTCJan 2 in position 05 28N 002 21E, some 50 nm south of Cotonou, Benin, while en route from Lome Togo to Lagos Nigeria. 6 crew were kidnapped, the ship reached Lagos after attack and as of morning Jan 4 was at Lagos anchorage.”

The Mandy was traveling at its average speed of 19 knots. See, speed recorded (Max / Average) 19.8 / 19.4 knots at marinetraffic. This speed is consistent with the international safety requirements of average speed to be at least 18 knots as an anti-piracy measure.

Reports available online don’t indicate what vessel or vessels the kidnapers used, and this provides us with some space for speculation. 55 nautical miles off the shore is equal to 101.86 km or 63.2 miles. Traveling with an average low speed of 18 knots or 33 km per hour, it would take the pirates over 3 hours to reach the Mandy. In the middle of the night the “pirates” would need to know exactly where to go and to distinguish the lights of the ship with the Russian crew from other vessels.

Judging by daily marine traffic tracker, this particular location has a very busy traffic, so the pirates in a complete darkness had to be very well informed about the exact location of the ship. The pirates didn’t abduct neither any of three Ukrainian citizens, no a Georgian citizen, which is a good indication that they specifically targeted the citizens of Russia.

Remarkably,  around the time of the attack, some rogue Flight Trackers identified in the area with the help of the Flight Radar, a flying north aircraft identified by the callsign GLEX. with its TRANSPONDER BEING TURNED OFF, so it could fly over the location of the ship unnoticed.

This fact is important, because of the reconnaissance nature of this aircraft according to the bloggers, you can read his report further down in full.

“(The Scullery)–Following indicates an area north of Brazzaville with SIGMET posted. Normally for weather conditions, there doesn’t appear to be any turbulence there at the moment: In addition, at Flight Radar, flying north, is an aircraft identified by the callsign GLEX:

The following previous note has been filed related to the callsign:
“Unknown aircraft doing circles around Qara Bagh, Afghanistan at 42k feet.Aircraft is identified as a Bombardier Global 6000. Call sign is GLEX which I assume is short for Bombardier Global Express . Apparently the RAF uses a modified version for reconnaissance at operates at 40k+ feet. I was also thinking it could be a KC135 or something that’s in a refueling pattern. Either way, I don’t understand why something like this is on flightradar….” see images

The activity of the UK air force  reconnaissance  aircraft over the location of the attack explains how the ship was located by the attackers in the middle of the night, and how they were able to pinpoint the ship with the Russian crew in this crowded waters.

A timing of the attack being 0000 UTC Coordinated Universal Time on 02 Jan 2019 also points out that it was a military operation.

The attackers either took over three hours to travel to the location from the Benin shore, or followed the ship from its previous destination for hours, or arrived earlier to the location and waited for the ship. Also, if they were the special operation forces, they could be parachuted on the ship.

Either way, it’s improbable that several “pirates” would coordinate to attack at exactly 0000 UTC.

So, what military forces in the area could conduct an operation of abduction of 6 Russian sailors?

To start with, Benin is de-facto a US colony. Benin is a defacto American colony. Probably kidnapped by US special forces pretending to be pirates.

Benin and Gabon are the Areas of Operation (AOR) for the U.S. 6th Fleet.

US military were already present in Port-Gentil before sending the intervention forces. It is Seabees of the Naval Mobile Construction Battalion (NMCB) No. 1 which, with Gabonese sappers, build since November a Maritime Operations Center (MOC).

Even judging by the publicly available information, there are plenty of American troops in Gabon, Benin and nearby countries. That’s why it made absolutely no sense for the President of the US to issue the deployment letter, since all previous deployments went without such announcement.  It makes even less sense to issue the letter after this alleged deployment has already commenced.

So, when on Thursday, January 4th, the President of the US issued a written statement about the deployment of the US troops to Congo, literally everything about this announcement demanded explanation.

Here what the letter says:

This action was taken consistent with my responsibility to protect United States citizens both at home and abroad, and in furtherance of United States national security and foreign policy interests, pursuant to my constitutional authority to conduct United States foreign relations and as Commander in Chief and Chief Executive.

I am providing this report as part of my efforts to keep the Congress fully informed, consistent with the War Powers Resolution (Public Law 93-148).  I appreciate the support of the Congress in these actions.

While I ask “why the letter?” other people, familiar with the local geography, ask “why Gabon?”

Mohamed Keita, an African journalist, tweeted “But Gabon doesn’t even share a border with DR Congo?! Troops would have to fly over another country to “cross into Kinshasa” – Why Gabon?”

Mohamed Keita ask this question while commenting an announcement of deployment  by Barbara Starr, a CNN Pentagon corresponded: “80 armed US troops now landed Gabon, ready to cross into Kinshasa, Democratic Republic of the Congo to protect US citizens & embassy in wake of election violence. Troops arrived with “appropriate combat equipment and supported by military aircraft” according to WH. 4:10 PM – 4 Jan 2019″ Barbara Starr called this “A first major deployment of US troops in potential contingency operation under DepSecDef .”

Other bloggers noticed that the US effectively established a no-fly zone over the area.

GABON–US Reaction Force Staged in West Africa–TRANSPONDER–“GLEX” TURNED OFF..- election crisis in Congo amid US shutdown, mapping the operation..

THE #GABON-DRC AREA OF OPERATIONS (AOR)

UPDATE: Note a few minutes following post of the report on the field op on Twitter, Flight Tracker has no record of “GLEX,”, the TRANSPONDER WAS TURNED OFF..

(The Scullery)–Following indicates an area north of Brazzaville with SIGMET posted. Normally for weather conditions, there doesn’t appear to be any turbulence there at the moment:

In addition, at Flight Radar, flying north, is an aircraft identified by the callsign GLEX:

The following previous note has been filed related to the callsign:
“Unknown aircraft doing circles around Qara Bagh, Afghanistan at 42k feet. Aircraft is identified as a Bombardier Global 6000. Call sign is GLEX which I assume is short for Bombardier Global Express . Apparently the RAF uses a modified version for reconnaissance at operates at 40k+ feet. I was also thinking it could be a KC135 or something that’s in a refueling pattern. Either way, I don’t understand why something like this is on flightradar….”

The top image is what appears to be a no-fly zone, possible insertion route for rescue ops should the situation on the ground heat up following election results. Only essential aircraft would be permitted in that particular AOR The GLEX image altitude is consistent with the observation comment.

Des militaires américains prennent position au Gabon–Finally, US military were already present in Port-Gentil (see my post here) before sending the intervention forces. It is Seabees of the Naval Mobile Construction Battalion (NMCB) No. 1 which, with Gabonese sappers, build since November a Maritime Operations Center (MOC).

The operation appears to be compromised by at least two observations: The first by the fact that the transponder on the GLEX flight from South Africa in what appeared to be a flight path toward Libreville. The second by the existence of the SIGMET above Brazzaville that may, or may not, represent a no-fly zone.

Considering all of the above, the most realistic version of the events is that the UK military organized an abduction of the Russian crew members with the help of the owners of the ship, a company based in the UK, who had three Ukrainian citizens and one Georgia citizen on board acting as informers.

In an attempt to cover up the British crime, the White House issued a letter of deployment of troops, while omitting to mention all the US boots of the ground in the region, making it look like troops just arrived on January 2nd, and thus allegedly no one was there on the morning of January 2nd to be implicated in the attack and abduction.

The WH letter could also be triggered by the fact that the flight trackers had discovered the RAF  reconnaissance aircraft in the area.

Stand for the Russian victims of the West organized Enforced or Involuntary Disappearances!