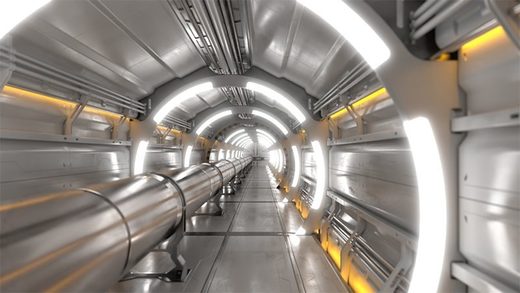 CERN has unveiled its bold dream to build a new accelerator nearly four times as long as its 27-kilometer Large Hadron Collider – currently the world’s largest – and up to six times more powerful.

The European particle physics laboratory, outside Geneva, Switzerland, outlined the plan in a technical report on 15 January.

The document offers several preliminary designs for a Future Circular Collider (FCC) – which would be the most powerful particle-smasher ever built – with different types of colliders ranging in cost from around €9 billion (US$10.2 billion) to €21 billion. It is the lab’s opening bid in a priority-setting process over the next two years, called the European Strategy Update for Particle Physics, and it will affect the field’s future well into the second half of the century.

“It’s a huge leap, like planning a trip not to Mars, but to Uranus,” says Gian Francesco Giudice, who heads CERN’s theory department and represents CERN in the Physics Preparatory Group of the strategy exercise.

After the LHC’s historic discovery of the Higgs boson in 2012, the collider has not discovered any new particles. This points to a need to push energies as high as possible, Giudice says. “Today, exploring the highest possible energies with bold projects is our best hope to crack some of the mysteries of nature at the most fundamental level.”

The potential for a machine such the FCC is “very exciting”, says Halina Abramowicz, a physicist at Tel Aviv University who heads that European strategy process. She adds that the FCC’s potential will be discussed in depth and compared to other proposed projects.

The CERN Council, which includes scientists and government delegates from member countries, will then make the final decision on whether to fund the project.

Not everyone is convinced the super collider is a good investment. “There is no reason to think that there should be new physics in the energy regime that such a collider would reach,” says Sabine Hossenfelder, a theoretical physics at Frankfurt Institute for Advanced Studies in Germany. “That’s the nightmare that everyone has on their mind but doesn’t want to speak about.”

Hossenfelder says that the large sums involved might be better spent on other types of huge facilities. For example, she says that placing a major radio telescope on the far side of the Moon, or a gravitational-wave detector in orbit, would be safer bets in terms of their return on science.

But Michael Benedikt, a CERN physicist who led the FCC report, says that such a facility would be worth building regardless of the expected scientific outcome. “These kind of largest scale efforts and projects are huge starters for networking, connecting institutes across borders, countries. All these things together make up a very good argument for pushing such unique science projects.”

Though Hossenfelder says that a similar argument could be made of other big-science projects.

The FCC study started in 2014 and involved more than 1,300 contributors, according to CERN, with a financial contribution from the European Commission’s Horizon 2020 research-funding programme. Most of the scenarios it outlines involve a 100-km tunnel to be dug next to the existing Large Hadron Collider’s tunnel. The cost for this and the related infrastructure on the surface would be around €5 billion, says CERN.

A €4-billion machine built in such a tunnel could smash electrons and their antimatter counterparts, positrons, with energies of up to 365 gigaelectronvolts. Such collisions would enable researchers to study known particles such as the Higgs boson with greater precision than is possible at a proton-proton collider such as the LHC. This new research programme would start only around 2040, after the LHC – including a planned upgraded version – has run its course.

Physicists have long planned to build an International Linear Collider (ILC) after the LHC, which would also smash electrons and positrons. Japanese scientists pitched to host in 2012. But the LHC’s failure to find any unpredicted phenomena has diminished the case for a linear collider. This is because the ILC would only reach energies sufficient to study the Higgs but not to discover any new particles that may exist at higher energies, as CERN’s planned collider might. The Japanese government is set to decide whether it wants to host the ILC by 7 March.

Another option outlined in the report is a €15-billion, 100-km proton-proton collider (also known as a hadron collider) built in the same tunnel that could reach energies of up to 100,000 GeV, much higher than the LHC’s maximum capability of 16,000 GeV. But a more likely scenario would be to build the electron-positron machine first, and move on to the proton-proton collider later on, in the late 2050s. Either way, the higher-energy machine would look for entirely new particles, which could be more massive than the known ones and therefore require more energy to produce.

The hadron collider would be only 15% longer than the Superconducting Super Collider, a project in Texas that was abandoned over cost concerns in the 1990s when its tunnels were already in mid-construction. But because of technological improvements, notably in the magnets that bend the protons’ path around the ring, it would smash the particles at energies more than twice higher.

Much research and development is still to be done, which is one reason why it might make sense to build the lower-energy machine first. “If we had a 100-km tunnel ready tomorrow, we could start building an electron-positron collider right away because the technology essentially exists already,” says Giudice. “But more research and development is needed for the magnets required by a 100 teraelectronvolt collider.”

Wang Yifang, the director of China’s Institute of High Energy Physics (IHEP) in Beijing, says that he does not doubt that the lab could pull off such a project. “CERN has a long history of success. It has the technological capabilities, the management skills and good relationships with governments,” he says.

Wang is leading a similar project in China, and he says that reassuringly, both efforts have come to essentially the same conclusion in terms of science goals and technical feasibility. In particular, it is a natural choice to do electron-positron collisions first and then move on to hadrons later, he says.

Much of the added cost for a hadron collider would come from the need for powerful superconducting magnets and the huge helium cryogenic systems to keep them cold. The hadron-colliding FCC would aim at 16-tesla magnets based on the superconducting alloy Nb3Tn, which would be twice as powerful as the LHC while in principle requiring only slightly warmer temperatures. China on the other hand is pushing for more advanced – but less proven – iron-based superconductors that could push temperatures even higher. “If you are able to do it at 20 kelvin, then you get huge savings,” Wang says.

Even if particle physicists agree that the world needs a 100-km collider, it is unclear whether it needs two. Whichever side gets such a project going first will probably pre-empt efforts on the other side. Either collider would host experiments open to the broader international community, Wang says, so scientifically it will not make a difference which one ends up being built.