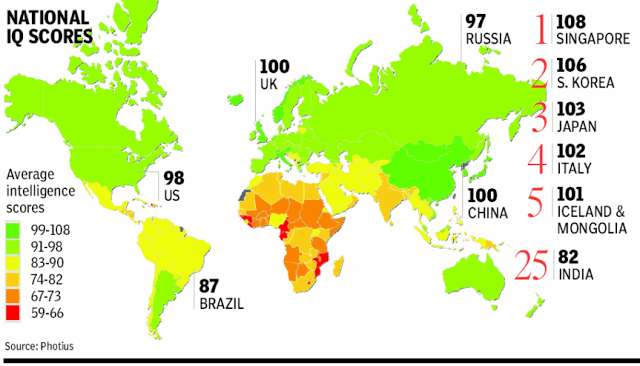 Apparently Watson had reiterated his view that people of African descent tend to have lower intelligence. The thing is this has been borne out by surveys of national average IQ so this isn’t just a matter opinion; it is a point of fact.

The most recent surveys of average IQ by country clearly show marked regional differences globally. In the last survey the top six positions of average national IQ are held by East Asian countries, while the next 20 in the chart are European countries or countries like Canada that are predominately populated by those of European descent. You have to go nearly halfway down the list before coming to an African nation, Sierra Leone.

From that point on there is a mix of nations until you get to the last 39, which are all African or largely populated by descendents of Africans like Jamaica.

However, this is not about “white supremacy”, as East Asian countries occupy the top six positions of the chart.

Yet here we have a leading scientist being essentially reprimanded for views that are supported by the facts. If nothing else this illustrates how a politically correct worldview is being imposed and to differ is seen as tantamount to heresy.

Finally, for the record, this writer’s father was a mixed race South African. Ed.

The facility said it condemned his views of race and ethnicity, which he recently expressed in the PBS documentary American Masters: Decoding Watson. He resigned under firefrom the Cold Spring Harbor Laboratory in 2007 after telling a British newspaper that people of African descent tend to have lower intelligence

In the PBS documentary, the host asked Watson if he had changed his views on race in the decade since his departure from the lab. He said they had not.

“Dr. Watson’s statements are reprehensible, unsupported by science, and in no way represent the views of CSHL, its trustees, faculty, staff, or students. The Laboratory condemns the misuse of science to justify prejudice,” the laboratory said in a statementFriday.