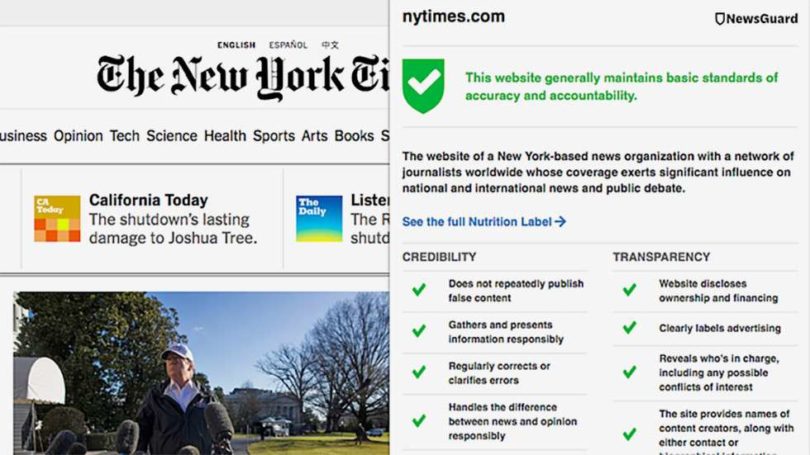 Another day, another effort to combat ‘fake news’ online. This time it’s NewsGuard, a new app claiming to help defend against “disinformation” by adding ‘trust rankings’ to news websites. But can the app itself be trusted?

Color-coded system with (potentially) no escape

NewsGuard rates the news using a color-coded ranking system designed and monitored by a “SWAT team” of analysts who it claims have no “political axes to grind.” So far, the app has rated more than 2,000 popular news websites, but plans to eventually provide ratings for the 7,500 most-read news and information sites in the US, before ultimately going global.

The app uses “9 criteria” to determine whether a particular site is rated green, yellow or red. To attain a green rating, a site must gather and present information “responsibly,” must not publish “false content,” and must clarify and correct errors. Avoiding “misleading headlines” and disclosing “ownership and financing” can also help secure a green rating, or “nutrition label” as NewsGuard refers to its assessments.

Partnering with Microsoft, NewsGuard is trying to have its rankings installed by default in US public school and university libraries, as well as on smartphones and computers. Hawaii is the first US state to have installed NewsGuard on its public library computers.

NewsGuard claims on its website that it “will be available on mobile devices when the digital platforms such as social media sites and search engines or mobile operating systems add our ratings and Nutrition Labels directly.” In other words, plans are afoot to get NewsGuard integrated into social media sites like Facebook and Twitter directly, rather than NewsGuard remaining a downloadable app that people can choose to use or not.

The NewsGuard app has a seemingly benign goal; to “restore trust and accountability” in journalism. Sounds good, doesn’t it? A closer look at the project, however, reveals that NewsGuard’s definition of “unreliable” news, along with its dodgy investors, advisors, and corporate partners are highly questionable.

But is it really that simple?

An in-depth report by MintPress claimed that NewsGuard is “funded by and deeply connected to” the US government while trying to retain a public image of being a dispassionate and unbiased arbiter of truth and reliability in the media. Contacted by RT, NewsGuard said that it has received “no” government funding. Even a cursory look at its leadership, however, reveals former US government officials – including the chief of both NSA and CIA.

EXCLUSIVE: As Newsguard’s project advances, it will soon become almost impossible to avoid this neocon-approved news site’s ranking systems on any technological device sold in the United States. @_whitneywebbhttps://www.mintpressnews.com/newsguardneocon-backed-fact-checker-plans-to-wage-war-on-independent-media/253687/ …

Newsguard, the internet news “fact checker” has deep connections to the US government and silicon valley, and it’s going after independent media.

181 people are talking about this

NewsGuard has received wide praise from mainstream outlets in recent months. The Boston Globe described it as a tool which “helps stand guard against fake news,” while TechLife hailed NewsGuard’s founders as the “Guardians of the (Online) Galaxy.”

Who is behind NewsGuard?

So, who are these guardians of truth, exactly? NewsGuard was co-founded by veteran journalist Steven Brill, who also founded the American Lawyer magazine, and Louis Gordon Crovitz who was previously the executive vice president of Dow Jones and has edited books for the American Enterprise Institute (AEI) and the Heritage Foundation — two neoconservative think tanks which were heavily involved in promoting the Iraq war.

Heritage and the AEI, are linked to the US defense industry and have also been involved in pushing for the expansion of US military action in countries like Syria and Libya.

Crovitz himself, as noted by MintPress, has been accused of “repeatedly getting his facts wrong”in his Wall Street Journal articles and even his own sources have taken him to task over “fantastically false claims.”

NewsGuard also has a number of “advisors” which might raise eyebrows. Among them are Tom Ridge, a former Secretary of Homeland Security under George W. Bush, former CIA director Michael Hayden and Richard Stengel, a former Undersecretary of State for Public Diplomacy under Barack Obama and now “distinguished fellow” at the US arms manufacturer-funded Atlantic Council think tank. Stengel admitted that some people described his former post at the State Department as akin to being the “chief propagandist” for the US government.

This website, RT, received a ‘red’ rating on trustworthiness from NewsGuard. One of the reasons cited by the app is that RT articles usually “do not name the author.” There are other news sites, however, that do not name authors. The Economist is a well known example of a publication which does not add bylines to stories. Yet, installing the app, it is easy to check that The Economist gets a ‘green’ rating when it comes to content creator transparency.

NewsGuard also pointed out that two former RT hosts resigned after being unhappy with the channel’s editorial slant, but makes no mention on its MSNBC rating that multiple hosts from that channel have either resigned, been fired or pushed out for failing to adhere to its pro-establishment editorial line.

Look at how a US government-funded website is rated on ‘trustworthiness’ by the Big Brother-style NewsGuard app vs. how they rate RT

Would it shock you to learn that NewsGuard has deep connections to the US government?

RT asked NewsGuard to provide examples of the so-called “false content” published by RT, but was simply referred to the public “nutrition label” where no clear examples of false content are available.

Then there is the mainstream media bias. The New York Times has a “green” rating, despite incidents like this week’s “Russiagate” scoop, in which the paper cited an anonymous source to assert former Trump campaign manager Paul Manafort shared poll data with “a Russian oligarch close to the Kremlin.” Sure, the Times eventually issued a correction – it was two Ukrainian oligarchs – which basically made the bombshell report a dud, but not before it had already gone viral in #Resistance circles and cable news channels.

The Guardian also enjoys a “green” rating, despite the whopper of a story from November claiming that Manafort (yes, “Russiagate” again) secretly met with WikiLeaks co-founder Julian Assange three times over the past several years. The story was debunked by both protagonists who threatened to sue the newspaper for libel. Manafort said he had never met Assange or anyone connected to him, and was not even contacted by anyone connected to WikiLeaks, “either directly or indirectly.”  However, six weeks and counting, no apology, no retraction, no explanation.

And what of CNN? The network’s obsession with President Donald Trump has forced it to eat crow several times since 2016 – including retracting one story and firing its authors. In another instance, CNN relied on an anonymous source to run a bombshell report about the Trump campaign and WikiLeaks, only to be burned when the date on the email was shown to be completely wrong. CNN’s NewsGuard rating? Green, of course.

Does it make sense to trust a US government-linked news rating app? Not according to RT writer Bryan MacDonald, who said that such an app “will obviously only penalise news outlets which threaten the official US narrative on events.” It is inevitable that all news outlets, including RT, will occasionally make mistakes, MacDonald said — but if RT made one mistake a week and the New York Times or CNN made 10, they’d still be given a higher trust rating because their reportage“suits the official line.”

ALSO ON RT.COMDebunked: How VoA journalist pushed fake news story on ‘Russian tanks crossing into Ukraine’Privacy activist and technology expert Bill Mew said that apps which rely on “some level of automation” and algorithms have the “potential to be unbiased” if they are trained correctly. If not, “there is always the risk of some form of inherent bias.”

NewsGuard claims, however, that it is not algorithm based, but human-based, using a team of real people to decipher the credibility of individual sites, which would seem to make it even more susceptible to bias, not less, as it claims.

With its links to the US government and national security state, it should already be clear that NewsGuard is not as objective as it claims to be, but there are indeed even more reasons to be concerned about potential conflicts of interest. One of the company’s biggest investors is the Publicis Groupe, which boasts clients like Merck, Pfizer, Bayer Monsanto, McDonalds and Procter & Gamble.

Microsoft has partnered with popular News Rating website NewsGuard to help users spot fake news with ease. The NewsGuard feature is rolling out to Microsoft Edge beta on iOS and Android devices. The…

49 people are talking about this

This makes the possibility and probability of commercial bias “more than obvious and most probably guaranteed,” according to legal and media analyst Lionel. “What do you think would be the chances of the publication of a story that refuted the efficacy of a sponsored item or service? Nil. Zip. Nada,” he said.

One of the most disturbing aspects of NewsGuard is that not only does it go after alternative news sites with its color-coded rankings, it also wants to hit them financially by targeting the online revenue they earn from advertising.

In conjunction with NewsGuard, there is now ‘BrandGuard’ which purports to help advertisers steer clear of sites publishing “unreliable news and information” — but as we have seen, there are serious questions about what this app is willing to tarnish as “unreliable.” This full-spectrum assault could have “devastating” consequences for alternative media in the West, MacDonald said.

ALSO ON RT.COMFive examples that show internet censorship is as much a threat to the left as the rightAs for the effort to make NewsGuard compulsory, it was branded as “Orwellian” by MacDonald. “Brainwashing kids with pro-government or pro-elite or pro-status quo messaging sounds very sinister,”  he said.

So, with some genuinely fake news floating around out there and apps like NewsGuard which are problematic in their own way, how can people consume news consciously?