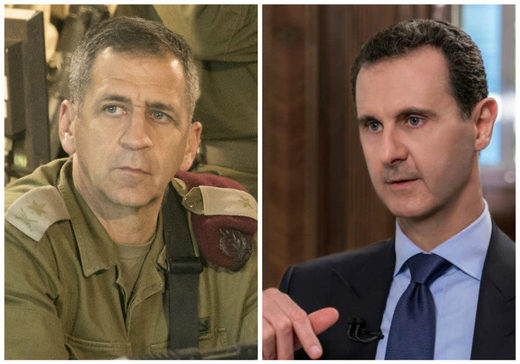 Israeli Prime Minister Benjamin Netanyahu appointed Lt. Gen. Aviv Kochavi as the new military chief of staff Tuesday, according to a report by Haaretz. Kochavi replaced Gadi Eisenkot, who recently made headlines by admitting that Tel Aviv had supplied weapons to terrorists in Syria.

“I take this job upon myself in sacred reverence; I take it as an honour,” Kochavi said during the ceremony, attended both by Netanyahu and Eisenkot.

“Now, as it is my turn, and I have received the responsibility of leading the army, I commit to dedicating all my energy, with a critical and demanding approach, to strengthening our defensive wall, to training for present and future threats – which focuses upon strengthening our attack capabilities towards our enemies and presenting an army that is deadly, efficient and modern, that preserves its mission and its uniqueness,” he added.

Today, Lt. General Aviv Kochavi became the IDF’s 22nd chief of staff, taking over from Lt. General Gadi Eisenkot at a ceremony at the IDF’s headquarters in Tel Aviv.
We wish him good luck and a peaceful term!#IDF #israel pic.twitter.com/Sp4O1DlhcT

​While Kochavi’s speech could be perceived as humble, Netanyahu, who promoted Kochavi to chief of staff, then spoke with his trademark, much more aggressive tone.

“We must poke holes in Iran’s lies,” Netanyahu said during the ceremony. “We made that apparent with the revelation of Israel’s secret nuclear archive. We did it by destroying the attempted preparations of Hezbollah. I advise them to leave [Syria] quickly, because we will continue with our assertive policy, as promised, without fear and without a break.”

“I am not looking for excessive wars, yet in necessary wars we will be asked to show true sacrifice,” he added.

The departing Chief of Staff Eisenkot also spoke, pointing out that during his time, he prioritized bringing Israeli soldiers safely back home.

“During my service I saw it as a duty to fill out many tasks and to make every effort to return my soldiers home safely,” he said. “Out of this responsibility I placed my goals as chief of staff, and in light of this, I am looking at the army I leave behind me and see that it is a fit, prepared and powerful military that has grown stronger in wisdom and determination.”

He added that IDF’s accomplishments were achieved “not with arrogant words but with modesty, deep thought, meticulous planning and professional execution while always casting doubt and aiming to improve.”

“Defense actions cannot always be summed up in an eight-word headline in a newspaper,” he added.

“I have known Aviv for many years. We have collaborated, and I think he will be a great chief of staff. We know from the time he served as the head of the Intelligence Corps and as the commander of the Gaza Division. He’s a very talented man,” he said.

Aviv Kochavi earlier served in the intelligence branch of the Israel Defense Forces (IDF). During his time in the intel community, he reportedly proposed to assassinate Syria’s Assad over his support for Hezbollah in Lebanon. The proposal was turned down at the time, as the military was more focused on countering Tehran, according to an unnamed senior Israeli official cited by the Jerusalem Post.