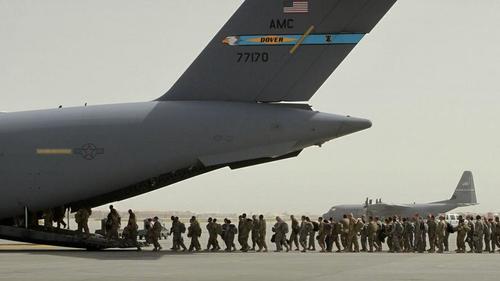 CNN warns “officials brace for Trump announcement on Afghanistan” after Trump’s Wednesday bombshell Syria troop pullout announcement. He’s now initiated “a major drawdown” of forces in Afghanistan too, and while inside the beltway neocon heads might continue to explode, the broader public for which the seventeen year long Afghan war is deeply unpopular will no doubt cheer the move. And already NBC reports Thursday evening based on defense sources the White House has asked the Pentagon to draw up plans presenting “multiple options” including a “complete withdrawal”. Following the “options” order it now appears Trump has pulled the trigger and “ordered the start of a reduction of American forces in Afghanistan”according to a breaking WSJ report:

More than 7,000 American troops will begin to return home from Afghanistan in the coming weeks, a U.S. official said. The move will come as the first stage of a phased drawdown and the start of a conclusion to the 17-year war that officials say could take at least many months. There now are more than 14,000 U.S. troops in Afghanistan.

Further the WSJ reports it marks “the start of a total pullout that could take at least many months.”

The major reduction of U.S. troops in the country will begin as soon as within several weeks, according to sources cited in The Wall Street Journal. Currently there are about 14,000 troops in Afghanistan in continuation of a NATO advise, train and assist mission as part of the longest running war in United States history.

Trump reportedly stoked “anger and confusion” among some lawmakers and Pentagon officials over his Syria pullout decision; however, he appears to be sticking to his prior “bring the troops home” promises made on the campaign trail in 2016. In a series of Tweets, the president defended the 180 degree shift in Syria policy, which as of only less than a week ago was was expressed by US special envoy for Syria, Ambassador James Jeffrey, as “countering Iran”.

In a Thursday Tweet that could have just as well been about Afghanistan, Trump stated: “So hard to believe that Lindsey Graham would be against saving soldier lives & billions of $$$.” And added, “Time to focus on our Country & bring our youth back home where they belong!”

So hard to believe that Lindsey Graham would be against saving soldier lives & billions of $$$. Why are we fighting for our enemy, Syria, by staying & killing ISIS for them, Russia, Iran & other locals? Time to focus on our Country & bring our youth back home where they belong!

Meanwhile it shouldn’t be forgotten that even the generals responsible for executing the Afghan war have been critics of late, including the commander of NATO’s Resolute Support Mission and U.S. Forces in Afghanistan.

Speaking to NBC News in early November, Gen. Austin Scott Miller made deeply pessimistic public statements after taking charge of American operations, and shocked with his frank assessment that that the Afghan war cannot be won militarily and peace will only be achieved through direct engagement and negotiations with the Taliban — the very terror group which US forces sought to defeat when it first invaded in 2001. “This is not going to be won militarily,” Gen. Miller said. “This is going to a political solution.”

He explained further to NBC at the time:

My assessment is the Taliban also realizes they cannot win militarily. So if you realize you can’t win militarily at some point, fighting is just, people start asking why. So you do not necessarily wait us out, but I think now is the time to start working through the political piece of this conflict.

So it appears Trump is actually heeding his general’s assessment in ordering the significant drawdown.

The United States has spent well over $840 billion fighting the Taliban insurgencywhile also paying for relief and reconstruction in an “endless war” that has become more expensive, in current dollars, than the Marshall Plan, which was the reconstruction effort to rebuild Europe after World War II.