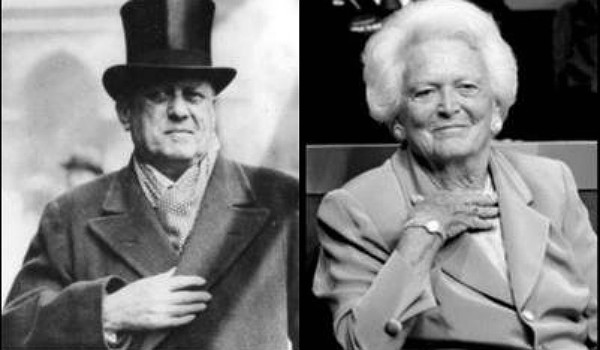 There is a theory that Barbara’s biological father was satanist Aleister Crowley. [see: Aleister Crowley 666: The Essence of Evil] Other than to say, “um,” we make no claims, as we don’t have access to the DNA — but nothing would surprise us nowadays. At any rate, we leave it to the reader’s visual acuity and judgement. In other words: You decide.

The theory holds that Barbara’s mom, Pauline Pierce (1896-1949), was friends with satanist Aleister Crowley (1875-1947) — maybe more than friends. Pauline had a reputation of being a bit on the wild side in the ’20s. It has been reported that she and Aleister were in France together around September or October of 1924. Upon her return to America, Pauline gave birth to Barbara Pierce on June 8, 1925.

W magazine once described Pauline Robinson as “beautiful, fabulous, critical and meddling” and “a former beauty from Ohio with extravagant tastes.” On Sept. 23, 1949, Pauline was killed in an automobile accident in Harrison, New York, when her husband, Marvin, who was driving the car, lost control as he reached over to stop a cup of hot coffee from sliding across the seat and onto his wife. The car crashed into a tree, killing Pauline instantly.

As shown in the headliner photo and here – Crowley and Barbara Bush look like peas of the same pod.

The man at left is Crowley. The man at right is Marvin Pierce (1893- 1969), who is Barbara Bush’s supposed father and George W.’s grandfather. Umh, I don’t think I would gaslight you as crazy for picking contestant #1 based solely on visual evidence.

To my eye, the resemblance of George W. Bush to the superimposed Crowley is less stark, although he doesn’t really resemble Pierce either.

However, the comparison between George W.’s brother Marvin Bush and Aleister is striking and uncanny.

Barbara Bush was known to make some statements that were down right addled, such as shown in the meme below.

And who can forget George H.W. Bush’s duping delight at the Gerald Ford’s funeral, where he spoke about a “deluded gunman who killed President Kennedy.”

George W Bush always seemed to struggle with the 9/11 storyline. Here he talks about the placing of explosives in the Twin Towers. Then apparently forgetting Abraham Lincoln’s admonishment that no man has a good enough memory to be a successful liar, in the next video he speaks of “watching the first tower get hit on TV” No one watched the first tower hit that morning on TV.

George W Bush dancing and yucking it up at the Dallas police memorial service.

Next, watch George W. Bush wipe his hands on Bill Clinton’s shirt as they work the crowd in Haiti. W. was the perfect man for the job in our inverted world.