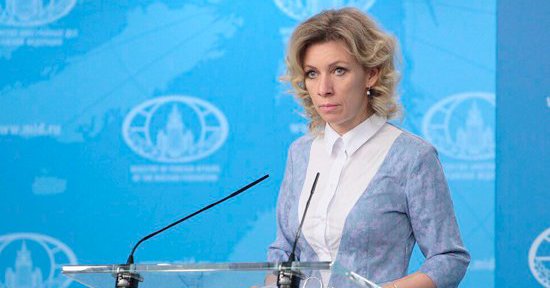 The UN General Assembly adopted a resolution against Media psycho-terrorism.

Press release on the adoption of a Russian resolution on international information security at the UN General Assembly.

Russia with the support of the majority in the UN started the liberation of people from what can only be described as the media psycho-terrorism. Trump’s war against the media junkyards and garbage cans being a part of this efforts.

Remembers their outrageous lies, fabrications, calls for social unrests, calls for all kind of “springs” against national governments, calls for murder of the heads of states and non-compliant with the globalists’ agenda journalists?  Anything to hold billions of people in a state of perpetual terror.

Now, we are getting the legal tools to confront this internationally recognized threat.

Remember how  a couple of years ago they were screaming, especially in Russia, that this would never happen and acted as if they were an unelected branch of government self-appointed to rule over us?

On December 5, the UN General Assembly adopted a Russian resolution on international information security (IIS) titled “Developments in the field of information and telecommunications in the context of international security.” It was supported by an overwhelming majority of states and co-authored by over 30 countries from different parts of the world.

This document has opened a new page in the global discussion on international information security, which was launched 20 years ago. The issue of international security was placed on the UN’s agenda in 1998 at Russia’s initiative.

It is notable that breakthrough decisions aimed at strengthening IIS have been adopted in the anniversary year of 2018. These decisions aim to protect the interests of all countries in the sphere of cyber security regardless of their level of technological development.

The document includes a number of innovations, starting with a provisional list of 13 international rules, norms and principles of responsible behaviour of states in this sphere. These actually form the world’s first code of conduct in the digital sphere, designed to create the foundation for peaceful interaction and to prevent war, confrontation and any other aggressive action.

These are crucial provisions, such as the commitment to use information and communications technology (ICTs) exclusively for peaceful purposes, to respect the sovereignty of states in the information space, to cooperate in the fight against the criminal or terrorist use of ICTs, and to prevent the proliferation of malicious ICT tools and techniques and the use of harmful hidden functions.

–  Accusations of organising and implementing wrongful acts brought against states should be substantiated.

– States must not use proxies to commit internationally wrongful acts using ICTs.

– The United Nations should play a leading role in promoting dialogue among member states to develop common understandings on the security of and the use of ICTs.

– State sovereignty and international norms and principles that flow from sovereignty apply to State conduct of ICT-related activities and to their jurisdiction over ICT infrastructure within their territory.

– States have a primary responsibility for maintaining a secure and peaceful ICT environment.

Second, we have recommended making the United Nations negotiation process on security in the use of information and communications technologies more democratic, inclusive and transparent.

With this aim in view, we have proposed convening an open-ended working group (OEWG) acting on a consensus basis. This means that all UN member states without exception will be able to take part in its activities. We are convinced that the era of “club” arrangements is over and that all countries, regardless of their level of technological development, have a right to take a direct part in talks on IIS at the UN and to influence the decision-making process. Every vote counts and must be taken into consideration. Only in this way can we create the basis for a fair and equal world order in the digital sphere.

The OEWG will be authorised to consider the entire range of issues related to IIS. It will continue, as a priority, to further develop the rules, norms and principles of responsible behaviour of states in information space, study how international law applies to the use of ICTs by states and build up the digital capability of the developing countries. It is the first time that the UN group on IIS has been given such a mandate. The OEWG will offer an opportunity to all countries to contribute to discussions and decision-making on these subjects.

Moreover, the status of discussions on IIS at the UN has been enhanced. Unlike the previous UN group of governmental experts on IIS, the OEWG will be a fully-fledged body of the UN General Assembly with the right to draft and recommend any documents to member states, including drafts of international treaties.

Another new element of the OEWG mandate is the right to study the possibility of establishing regular  institutional  dialogue  with  broad  participation  under  the  auspices  of  the United  Nations. In other words, the OEWG is to analyse different options for creating a permanent UN negotiating body on IIS.

This resolution for the first time stipulates the establishment of a mechanism of the group’s intersessional consultative meetings with the interested parties, namely business, non-governmental organisations and academia, to share views on the issues within the group’s mandate. This will allow involving these interested parties in discussions on the crucial aspects of the use of ICTs.

It is regrettable that the Western countries, primarily the United States and the EU, voted collectively against these progressive ideas, which all the other states have supported. By doing this, the Western countries have set themselves off against the international community. It is indicative that these very states are promoting an atmosphere of mistrust in the media and accusing other countries of cyber attacks. This leads to the conclusion that they have only their own mercenary goals in mind and have no interest in looking for objective and pragmatic solutions to the problem of information security, or in ensuring that talks on this topic are open and transparent for all parties.