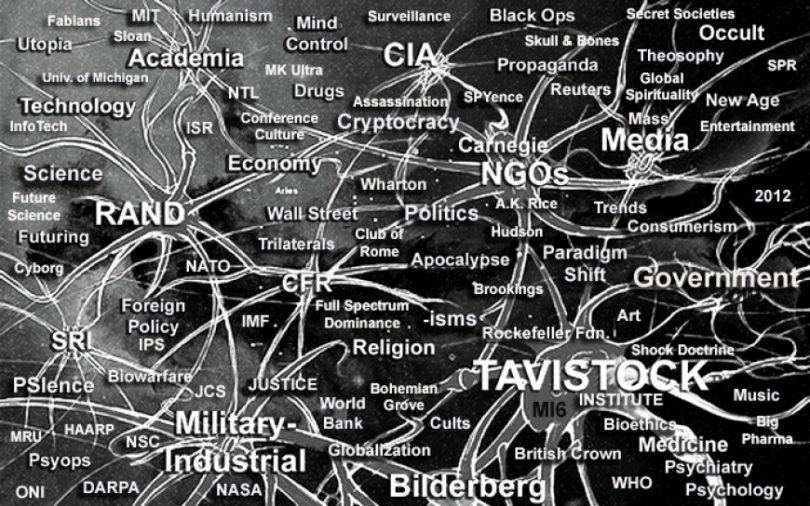 It’s up to the rest of us to stop this flight into fascist social slavery, or worse, eugenics elimination.

We recommend that you listen to this audio/video while reading the post below.

Citations: Most of the citations supporting Richard Allan’s profile are contained within the biography and timeline available here.

PLEASE RETURN TO THIS POST: We have a large number of source links to add to this post, but we wanted to get the narrative moving prior to having all the link documents full processes and indexed. They will be added over the coming week. 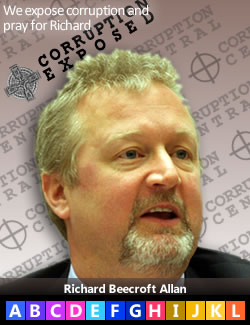 Baron Allan of Hallam, of Ecclesall, Sheffield, in the County of South Yorkshire

(DEC. 28, 2018)—These are the latest findings in the ongoing investigation of Baron Richard Beecroft Allan, Facebook’s vice-president of policy for Europe, Middle East & Africa (appointed Jun. 26, 2009).

The C.I.A. MKUltra program emerged from Tavistock. Tavistock has now openly seized control of its creation: Facebook, via two British peers, one with direct ties to Tavistock which we describe in this post.

The C.I.A., with help from Facebook Baron Richard Beecroft Allan’s grandfather, organized stay-behind paramilitary units in each Allied country and others after WWII that re-purposed Tavistock’s mass mind control methodologies to promote fascist profiteering from terror via perpetual war and the cattle herding of public opinion. This is how the military-industrial complex sustains its power and wealth—by cheating and mass deception.

“Conspiracy theory?” Well, did you know that this phrase itself (along with “vast right wing conspiracy theory”) is one of the Tavistock psychiatrists’ most durable mass mind control creations? It was first used to hide the rogue C.I.A.’s assassination of President Kennedy, and the rapid expansion of post-war U.S., British and Commonwealth stay-behind paramilitary cells led by the first C.I.A. director Allen Dulles. “Conspiracy theory!” continues to be a durable ruse to hide great sin. The sooner we stop giving it control over our psyche, the sooner we can raise our level of consciousness. Let’s put this evil psychiatrists’ meme on the dustbin of history.

From 1941-1945, Tavistock was managed out of the British War Office with the intent to destabilize Germany, manage and train the British military, and to try and improve public morale. Churchill thought their techniques were too intrusive and unnecessary to run the war and the media. To get back at Churchill for openly opposing their psychiatric techniques (borrowed from the pre-war German Kaiser Wilhelm Institute), Tavistock successfully turned public opinion hard left, progressive, and against Winston Churchill’s re-election in 1945.

Sometimes a well-placed phrase or impression is enough to swing public opinion dramatically.

Evaluate the thoughts going through your head as you read these phrases. They are probably emotionally charged and called by the Tavistock psychiatrists: “inner directional conditioning.” Once implanted, they are difficult to un-embed, even in the face of contradictory facts.

TAVISTOCK SUCCESS: “WHEN THE PUBLIC BELIEVES THE LIE”

A C.I.A. operative was once asked how he knew when brainwashing was being effective. He answered, “When the public believes the lie.”

In 1946, Rockefeller, Rothschild and the British royals—eager to benefit from Tavistock’s ability to herd an unsuspecting public—hurriedly funded and privatized The Tavistock Institute. They also wanted to continue the eugenics priorities that they still shared in common with the defeated Germans. Bottom line, they are all fascists to the core.

Tavistock’s previous name, The Wellington House, had prodded a reluctant British public into World War I with lies of the Kaiser murdering Belgian children. Thousands of German eugenics scientists from the Kaiser Wilhelm Institute were brought in to Tavistock (and the C.I.A.) after the war to continue their work. This was confirmed by the Church Committee Congressional hearings in 1976. Hedge funds like George Soros’ use these techniques to herd markets up and down at will.

(2) The Allan family involvement in stay-behind paramilitary units after World War II run by the C.I.A. and British MI6;

(3) The Allan family involvement in the top secret agreement between the U.S. and UK to share ALL intelligence after WWII while keeping the existence of the agreement secret—intelligence evidently exploited using Tavistock mind control techniques; and

These lines of inquiry have emerged from the seemingly simple task of compiling his resume following his appearance on Nov. 27, 2018 in London as a stand-in for no-show Mark Zuckerberg’s at an unprecedented meeting of European parliamentarians on Facebook data privacy.

An initial peruse of his background revealed sketchy resumes with glaring omissions, hence the deep dive by the AFI/AIM bird dogs.

Normally, British peers parade their family backgrounds in public like a talisman, but not Baron Richard. His silence was deafening. He discloses almost nothing about his family, his first wife, first daughter (Rosie Allan, we think), his current paramour (mother of subsequent twin daughters), his brothers and sisters, in-laws, parents or grandparents.

We believe we now know why. In summary, we believe Baron Richard is from a long line of spies and economic opportunists. They have exploited their elitist friends, family and associates to enrich themselves and support a radical leftist, progressive political agenda rooted deeply in the work of The Tavistock Institute.

Then, F L Allan guided the hastily organized post-War version of Tavistock as a private organization funded by the British royal family, the Rothschilds and Rockefellers. They had to act quickly once the war ended because Tavistock was otherwise slated to be absorbed into the newly-forming National Health Service in 1946.

Forbes was director general of the British Council (1946-1954)—a leading post-war spy agency, chairman of the National Industrial Psychology (1947-1952), the Institute of Education at University of London (1948-1967), the Library Association (1949), the Institute of Adult Education (1949-1964), and chairman of UNESCO (1957-1960). In short, Forbes, and grandpa FL Allan, spent their post-war careers spreading The Tavistock Institute’s leftist, progressive, eugenics mind control model in education, industry and politics around the world.

F L Allan was awarded a Military Cross and an M.B.E. by the Queen, and yet Baron Richard does not even mention him.

F L Allan, grew up in the Vicarages of several parishes in the North East of England, where his father was the local Church of England vicar—a prestigious position in the day.

At Cramlington parish the Allans became neighbors of the Bodger family who lived in the local Manor House and were drapers and grocers by trade. By the time F L Allan married Kathleen Elsie Bodger his father had been transferred to the parish of Spittal where there had long been a connection with The Mercers’ Company (a 700-year “Livery Company” within The City of London, one of 33 boroughs that comprise London, and alternatively called the “Square Mile” or the “Financial District” with its own Lord Mayor where over 400,000 work today). 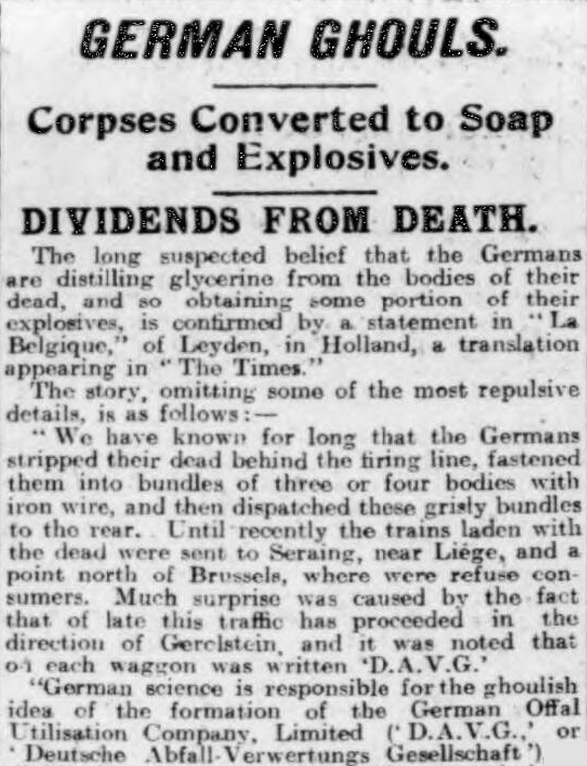 “[I]n 1925, the British Government announced that there had never been any foundation for the story.”— The British Newspaper Archive

This propaganda outlet (later renamed Tavistock Clinic and then The Tavistock Institute of Human Relations) broke down the stiff public resistance to going to war with their royal brothers and sisters in Britain and Germany. (Queen Victoria was Kaiser Wilhelm II’s grandmother.)

Why? Because the bankers in Germany, England and the United States would all profit handsomely by funding both sides, thus destabilizing Europe to accept their New World Order run by un-elected bankers and oligarchs.

After various teaching positions, F L Allen became the chief of staff (deputy assistant) at the War Office for the Adjutant-General Ronald Forbes Adam. Tavistock was under Adam’s command and was responsible for personnel, training, morale and shaping public opinion. He introduced a phalanx of Tavistock psychiatrists and psychologist who introduced numerous novel approaches that met with opposition by Winston Churchill, who thought his psychological testing batteries were too intrusive. Churchill tried, unsuccessfully, to get Adam reassigned.

Baron Richard’s father, John Frank David Allan, appears to have been what is known in the spy business as a “gray man.” A gray man is someone who just blends in to the scenery and one would never guess is a spy.

During World War II, Tavistock was the headquarters of the British Army’s Psychological Warfare Bureau which, through arrangements with the British Special Operation Executive (SOE) (later known as MI6), Tavistock dictated policy to the United States Armed Forces in matters of psychological warfare.

BARON RICHARD HAS MANY STAY-BEHIND NETWORKS IN THE U.S. TO AID HIS FACEBOOK MIND CONTROL EXPLOITATION

Tavistock’s chief theoretician, Dr. Kurt Lewin, came to the United States to organize the Harvard Psychological Clinic, the MIT research Center for Groups Dynamics, the Institute of Social Research at the University of Michigan; while his colleagues, Cartwright and Cantrill joined him to play a pivotal policy role at the psychological department of the Office of Strategic Services (OSS) (now C.I.A.), the Office of Naval Research ONI), the U.S. Strategic Bombing Survey and the Committee of National Morale.

Baron Richard’s family relationships to the Mercers (City of London UK) and the Scottish Rite Masonic Orders will be explored later. It is well known that the Queen’s Privy Council, British banks, the Rothschilds, the Rockefellers and the Mercers are tightly aligned with the rogue C.I.A. and the Senior Executive Service (SES) in the US.

What follows is a detailed biography and timeline for Richard Beecroft Allan (someone should send him a copy. Evidently, he was a toxic MP and now he is a toxic Facebook executive.

No wonder Baron Richard did not want to tell us who his daddy and granddaddy were, much less his current Spanish Tavistock paramour.

The first step in dismantling these insidiously corrupt systems is to know who the players are and how they interact. They must be exposed, prosecuted and appropriately punished for their crimes against humanity. The suffering and death they have caused these last one hundred years is horrific and demonic.

Their time is at an end.