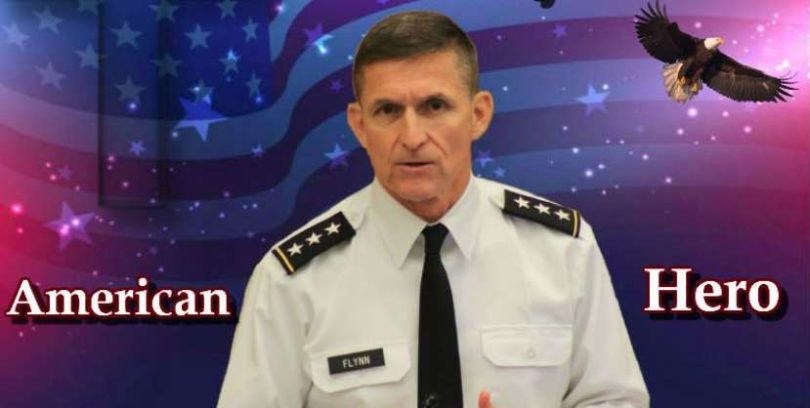 SOTN Editor’s Note: Mueller really had nothing to gain by asking for a prison sentence for Gen. Mike Flynn.  Had he recommended a long prison sentence, patriot Mike Flynn would have been transformed — OVERNIGHT — into a huge hero for the Right.

Instead, what does Mueller do but launch a media campaign with headlines like: Mueller Says Former Trump Official Provided “Substantial” Assistance.  This was a cynical and contemptible ploy to paint a real American hero as a stool pigeon.

With such a dearth of heroic figures on the Right because of nonstop MSM propaganda and hit pieces, Deep State will do anything necessary to prevent a real champion for the people from emerging.  Just look at what the CIA’s Mockingbird Media does to Trump each and every day.

As for the incorrigibly corrupt Robert Swan Mueller III, just take a good look at his well-hidden back story. Former DOJ Official Exposes “Mueller as a criminally-tainted agent of foreign & racketeering interests”

It’s really Mueller who should be on trial here, not Flynn or Trump.  After all, we’re talking about the guy who — as FBI Director — literally covered up the worst crime scene in U.S. history—the false flag terrorist attacks on September 11, 2001.  The degree to which he actually conspired in the execution of the 9/11 attacks is still  being investigated by former intel agents, law enforcement officers and PIs.  As follows:

KEY POINTS:  Robert Mueller was deliberately selected to lead the FBI during the terrorist attacks on September 11, 2001.  It was by purposeful design that his tenure as FBI Director began on September 4, 2001, just 7 days before the 9/11 false flag terror operation.  And, that he remained in that job for 12 corrupt years until September 4, 2013 to ensure that the FBI would never professionally investigate the greatest crime and act of terrorism ever perpetrated on US soil.  In fact, Mueller’s 12 years are marked by an overwhelming body of evidence which proves his willful neglect, dereliction of duty, official misconduct and misprision of felony.  Clearly, Mueller’s greatest crime to date was overseeing the institutional cover-up of the 9/11 government conspiracy to commit acts of terror, murder and destruction against the American people and property.
(Source: ROBERT MUELLER: He’s not a Special Counsel, he’s a Deep State hitman and cover-up artist!)

So this is the Special Counsel who has been given the power by Deep State to turn America upside down for the past two years.  He’s special alright…so special he’ll earn his own solitary confinement prison cell at Guantánamo Bay detention camp.  To understand just how corrupt Mueller really is, the following exposé lays bare his secret and sordid back story.  MUELLER was installed by his Deep State Masters to Cover Up Real Crimes, Fabricate False Crimes and Protect the Power Elite from Prosecution

As we are seeing often these days, “God writes straight with crooked lines”.  In the case of Madcap Mueller,  the whole world is getting a chance to see just how malevolent and ruthless, unscrupulous and underhanded agents of Deep State can be.  And this guy was America’s top cop for 12 loooooooong years!

N.B. It’s extremely significant that the following Alt Media article was even published.  By rehashing so much Mueller-generated trash it only serves the Deep State “slash and burn” agenda of destroying the Right at all costs.  SOTN reluctantly chose to post it for instructional purposes only so our readership really gets it.

Special counsel Robert Mueller on Tuesday effectively recommended that Michael Flynn receive no prison time for lying to the FBI, citing the former national security advisor’s “substantial assistance” in the Russia probe and other Department of Justice (DOJ) cases.

“Given the defendant’s substantial assistance and other considerations set forth below, a sentence at the low end of the guideline range — including a sentence that does not impose a term of incarceration — is appropriate and warranted,” Mueller wrote in a court filing submitted Tuesday night.

Flynn, a retired Army lieutenant general, met with the special counsel’s office or other prosecutors in the DOJ 19 times since pleading guilty Dec. 1, 2017, the highly-anticipated court filing reveals.

Flynn acknowledged in the guilty plea to making false statements to the FBI about his conversations in December 2016 with Sergey Kislyak, who then served as Russia’s ambassador to the U.S.

He admitted to falsely claiming in a Jan. 24, 2017, interview at the White House that in a Dec. 29, 2016, phone conversation with Kislyak, the topic of sanctions against the Russian government were not discussed. (RELATED: Michael Flynn Pleads Guilty To Making False Statements To The FBI)

Flynn also lied by denying that on Dec. 22, 2016, he asked Kislyak to delay a vote on a UN Security Council resolution related to Israel.

He will be sentenced in the case Dec. 18.

Mueller’s filing is redacted in key parts, allowing little insight into what information Flynn has provided prosecutors. But the document states that Flynn has provided “substantial assistance” to an investigation that appears to be separate from Mueller’s probe into possible collusion between the Russian government and Trump team.

Though the second investigation is not revealed, Mueller’s report does go into some detail about Flynn’s lobbying efforts for the Turkish government, though it does not state that an investigation is being conducted into those activities.

Flynn admitted in his plea agreement last year that he gave false statements regarding his work on behalf of the Turkish government. Flynn signed a $600,000 contract in August 2016 with a Turkish businessman linked to the Turkish government. As part of the work, Flynn wrote an op-ed for The Hill on Nov. 8, 2016 calling for the extradition of Fethullah Gulen, a U.S.-based imam who is critical of Turkey’s president.

Flynn falsely claimed that he wrote the op-ed on his own accord. He worked closely with his lobbying client, Ekim Alptekin, on the article, which was first exposed by The Daily Caller. Flynn’s guilty plea did not include charges for making false statements about his lobbying work, though his plea agreement precluded him from being charged with crimes related to his Turkish lobbying activity. (RELATED: Michael Flynn Is Lobbying For Obscure Dutch Company Linked To Turkish Government)

Flynn also provided “firsthand information” about “the content and context” of interactions between the Trump transition team and Russian government officials, Mueller’s team said. The nature of Flynn’s information is unclear because those sections of the Mueller filing are heavily redacted.

In addition to Flynn’s extensive cooperation, Mueller noted Flynn’s “exemplary” military record. But he also said that Flynn’s extensive government service “should have made him particularly aware of the harm caused by providing false information to the government, as well as the rules governing work performed on behalf of a foreign government.”

Prosecutors said that Flynn’s cooperation was useful largely because of the “timeliness” of it. The former Defense Intelligence Agency director began cooperating shortly after being approached by the special counsel, prosecutors revealed. Flynn’s early assistance likely influenced other firsthand witnesses to be forthcoming and cooperate with Mueller’s team.

Flynn will be the second Trump associate to be sentenced in the Mueller investigation. George Papadopoulos, a former campaign aide, was sentenced to 14 days in prison Sept. 7 for lying to the FBI about his contacts during the campaign with a Maltese professor he believed had links to the Russian government.