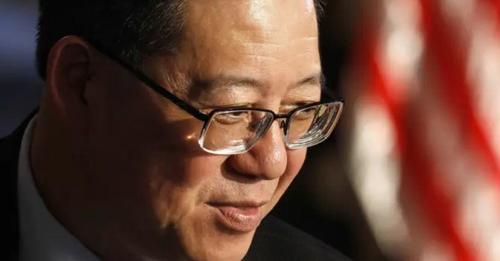 Malaysia is seeking a massive financial penalty from Goldman Sachs after filing criminal charges against the bank alleging that it lied in deal documents and knowing enabled Malaysian government officials and one corrupt financier to steal billions of dollars from the Malaysian people through 1MDB, the sovereign wealth fund that is at the center of one of the biggest financial frauds in history.

In comments to the Financial Times published Friday, Malaysian Finance Minister Lim Guan Eng said Goldman should pay reparations in excess of $7.5 billion in connection with three bond deals it underwrote for 1MDB (deals that netted the bank a staggering $600 million in fees, well above the typical 1% to 2% fees that are typically collected in these types of deals). The $7.5 billion figure is the largest floated so far by Malaysia, which has charged three of the bank’s Asian subsidiaries, as well as two Goldman bankers, in its criminal probe into 1MDB.

The $7.5 billion figure includes the entire $600 million fee collected by the bank, the $6.5 billion raised in the offerings (most of which was looted despite being earmarked for ‘infrastructure projects’) and the spread between the market rate and the above-market coupon on the 10-year 1MDB bonds.

Goldman responded by once again deflecting blame to the Malaysia officials involved with the deal.

“The 1MDB bond offerings were meant to raise money to benefit Malaysia; instead, a huge portion of those funds were stolen for the benefit of members of the Malaysian government and their associates.”

At the very least, Lim said Goldman should pay the entirety of the $1.8 billion the bank has set aside for legal expenses stemming from 1MDB.

The finance minister said that reparations from the bank should at the very least be more than $1.8bn — the sum Goldman told investors it had set aside to face potential losses related to 1MDB legal proceedings, in addition to the money it had previously earmarked for such matters.

Malaysia’s attorney general, Tommy Thomas, said when the criminal charges were first unveiled that the bank should pay reparations “well in excess” of the $2.7 billion Malaysia says was embezzled from the fund (the DOJ has used a much higher figure, $4.5 billion), along with the $600 million fee.

But this wasn’t the only bad news for Goldman and its CEO David Solomon, whose role in the scandal is under scrutiny since it came to light that he had served on one of the partner committees that helped greenlight the 1MDB deals (while his predecessor, Lloyd Blankfein, reportedly participated in meetings with Malaysia’s former prime minister – who is facing criminal charges from his role in the fraud – and even held a one-on-one sit down with Jho Low, the fugitive financier who helped organize the deals).

Singapore has reportedly expanded its probe into the fraud to examine the role of Goldman’s local subsidiary in fund flows related to the deal, according to Bloomberg. The investigation “opens a potential new battle front for Goldman” which is already fighting authorities in the US and Malaysia.

Singapore’s widened probe opens a potential new battle front for Goldman, less than a week after Malaysia filed the first criminal charges against the firm over a relationship that spawned one of the biggest scandals in its history. Singapore is coordinating closely with the U.S. Justice Department, which is also investigating Goldman and has filed criminal charges against two former senior bankers at the firm, the people said.

The firm said it “continues to cooperate” with all investigations.

“The firm continues to cooperate with all authorities investigating this matter,” Goldman spokesman Edward Naylor said. Singapore authorities didn’t immediately respond to a request for comment. John Marzulli, a spokesman for Brooklyn U.S. Attorney Richard Donoghue, whose office is prosecuting the case, declined to comment.

This is just the latest evidence that, for Goldman, the 1MDB comeuppance – which many fear could undo all of the bank’s “reputational gains” since the financial crisis (where it was first slapped with the nickname “Vampire Squid”) – has become the holiday gift that keeps on giving.