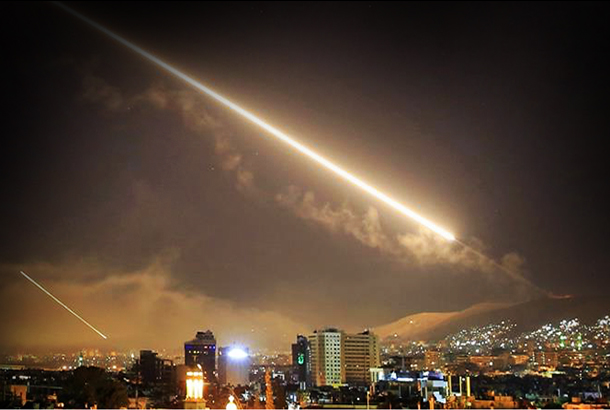 Yesterday, Israel carried out an unprovoked Christmas Day attack against Syria. According to reports citing the Russian Ministry of Defense, six Israeli F16 fighters violated neighboring Lebanese airspace and while passing over Sidon, fired 16 laser-guided GBU-39 bombs towards targets in and around the capital city of Damascus, 14 of which were intercepted by Syrian air defense systems.

More shocking details were revealed today, as the Russian Ministry of Defense confirmed that the IDF jets flew in to firing position – just as two civilian passenger airliners were in the air preparing for their landings into both Beirut and Damascus airports.

As a result, Syrian military defense units did not deploy its surface-to-air missiles and electronic jamming “to prevent a tragedy” and instead allowed Damascus air traffic control divert one of its passenger flights to an emergency destination at Khmeimim in Latakia.

Israel’s IDF would have been fully aware of these passenger airline flights, and therefore would have specifically chosen this exact position and timing in order to carry out their air operation against Syria. Based on this, one can logically conclude then that the IDF placed those civilian flight in danger, and that the Israeli military used those civilian airline flights as cover to increase their odds of executing a successful military airstrike.

“Provocative acts by the Israeli Air Force endangered two passenger jets when six of their F-16s carried out airstrikes on Syria from Lebanese airspace.”

Had the Syrian military not hesitated, and engaged the initial Israeli bogey – and accidentally hit one of the passenger airliners the IDF was using as cover – the international outrage would have been substantial, with the western media most certainly blaming ‘the Assad Regime’ and ‘Putin’s Russia’ for the ‘humanitarian tragedy.’ It’s possible that an incident would have been enough to prompt renewed calls for the US forces to remain in Syria – effectively reversing the announcement made by President Trump last week to withdrawal US troops from their illegal occupation on northeastern Syria. Whether this was the Israeli motive for carrying out such a risky move is uncertain, but yesterday’s reckless incident by Israel follows a familiar and disturbing pattern of using other country’s aircraft as cover in order bait Syria’s air defenses to hit the wrong targets while conveniently concealing their own visibility on their enemy’s radar systems.

Back in September, Israel executed a similarly reckless maneuver which led to the downing of a Russian surveillance Il-20 plane – killing all 15 crew on board. Israel’s F-16s effectively used it as cover during the attack, which led to the Russian plane being shot down by Syrian air defense systems as it attempted to land near Tartous. To make matters worse, Israeli officials failed to provide the correct location data of their fighter jets, instead feeding misinformation to Russian officials at the last moment, by falsely claiming that IDF jets were going to attack several ‘industrial facilities’ in northern Syria. This move prompted Russian officials to condemn the deceptive act as one of “criminal negligence”, stating at the time:

“The misleading information provided by the Israeli officer about the area of strikes did not allow the Russian Il-20 airplane to move timely to a safe area.”

After the Syrian air defenses responded to the initial Israeli strike, IDF jets then switched on radar jamming and pulled back – in what many have labeled as a “cowardly act” on the part of Israel.

To date, Israel has refused to acknowledge any responsibility for the Christmas Day attack, but according to a report by Newsweek quoting a source in the US Defense Department, Israel was targeting ‘senior Hezbollah leaders’ in the air strikes.