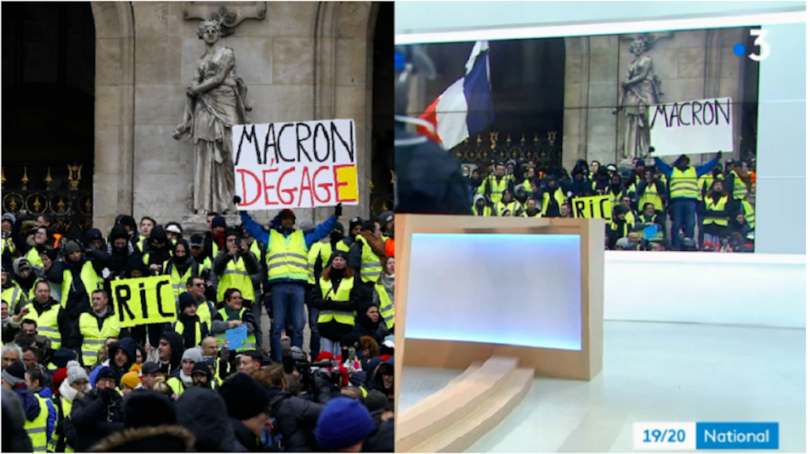 The Yellow Vests began hitting the streets and raising awareness about the latest economic austerity measures in France that have impacted everything from taxes to gas prices for the middle class and much more. The distaste for how things are in France has been building for many years and simply boiled over.

Like most other protests we’ve seen over the past few years, the mainstream media seems to constantly focus on violence, often brought forth by just a few to steer attention away from the actual issues and onto ‘an out of control public.’ In fact, I would personally not be surprised if people were hired to purposefully cause destruction. It happened here in Toronto for the G20 years ago.

We have to ask ourselves: would a grassroots movement of concerned law-abiding citizens (which most citizens are) motivate these ordinary citizens to set someone’s car on fire? How could destroying another citizen’s car actually help the movement? Looting and breaking store windows? Why would law-abiding citizens take their frustrations out on innocent retail vendors? Would ordinary citizens contrive to harm civilians with bombs and gas attacks? – Richard Enos (Why The Yellow Vests Movement Could Erupt Into A Modern-Day French Revolution)

This type of deception has been seen before, more so on a global scale, where events are created by the same people who propose the solution, 9/11 being a great example, or perhaps the chemical gas attacks in Syria that received so much mainstream media attention, accusing the Bashar regime of gassing their own people… yet there was absolutely no evidence of that.

Mainstream media is the greatest tool for perception manipulation that the deep state uses. This time, it appears someone has been caught doctoring a photo of signs from the Yellow Vests demonstrations.

The picture below is from French mainstream media channel, France3, as they were covering the Yellow Vest protests.

When discussing the protests they used an image provided by Agence France Presse (AFP) which looks like this:

France3 then delivered their news, only the photo now looked like this:

According to the broadcaster, as explained by RT, “the sign was broadcast reading just Macron, due to a “human error.”

How could “human error” erase a word from a sign in a photograph? This is a sad explanation to cover up something that has such a simple explanation. France3, like most other mainstream outlets, are trying to manipulate people’s perception. It should not take alternative media to provide the truth to people, but it does.

Another thing you won’t hear from western mainstream media outlets is that the majority of police in France agree with the Yellow Vests movement. Alexandre Langlois, the secretary-general of the VIGI police union, is quoted saying the following:

“Most of us back the Gilets Jaunes (Yellow Vests), because we will be directly affected by any rise in fuel prices. Most of us can’t live where we work, because it is either too expensive, or we would be arresting our next-door neighbors, so we drive significant distances. Our tax contributions are going up in several areas, but there are no commensurate wage rises… It is hard to accept these cruel measures.”

Why not share this with the public? Because the global elite does not like unity. The fact that police officers joined in on this one was great, and represents what change is all about. Change comes from shifts in consciousness within each individual, where we no longer see one another as enemies and separate, but as part of a whole and all affected by the same environment around us. One day, no human being will agree to go to war, kill another, or take orders to destroy. We are the tools used by the global elite, and we are people. Macron is a perfect example of that, clearly following the will of his puppet masters -the Deep State.

We are the ones who accept these measures, and despite the difficulty in reversing them, protests like this show that it can work as the government has already agreed to make changes. At the end of the day, we need to look at who our leaders are, why they are doing what they are doing, and why decisions are never really made for the best interests of the people, but rather politicians and corporate interests. Why don’t we vote on what actually matters? Why do we only vote on the puppet?

On the Carbon Tax

This is a deep topic, but at the end of the day, a carbon tax will do nothing to solve our problems, and only put the people into more financial turmoil and stress. Keeping us in this state, constantly fighting to make ends meet, for example, is a tactic used by the elite. It doesn’t have to be this way, and we have more than enough solutions and resources to provide abundance for all on this planet. But freedom for us means a loss of control and power for ‘them.’

With a large portion of our money going towards the Black Budget, and Special Access Programs that we have no idea about, it’s clear that our taxes are not really going towards us and building roads, infrastructure, public services, and more.  A huge chunk must be going elsewhere. Into the pockets of the elite? Other secret programs that remain hidden from the public?

Remember, trillions of dollars have gone unaccounted for. For example, who is paying for these under-ocean military bases?

The global elite have been meeting every single year for decades to combat environmental and climate issues, yet nothing has happened. If we keep looking towards these people for solutions, we will never get them and the ones we do get won’t benefit the collective, but rather the 1 percent. That’s exactly what’s happening with this carbon tax, the purpose of it is not at all to combat climate change. We’ve been sitting on several solutions for years, and this is the best they can come up with?

I recently wrote an article about solar activity and how it affects our climate, in it, I provide sources that show the politicization of climate scientists and links to professionals within the field who are trying let the world know what climate scientists really think of climate change. The majority of them seem to refer to it as climate ‘hysteria’ used to further give politicians the edge over human consciousness. They do not doubt climate change, just the extent that humans have had an impact on it, and point to a myriad of factors that are and could be affecting our climate. If you read it and examine the sources, you will see that most top climate scientists do not all agree as to what is happening here, the 97 % tagline comes from a cherry-picked group of scientists.

I do not deny climate change. Those who actually do the research and find out the carbon narrative is false are usually activists, like myself, for new clean green energy technologies. I believe our focus should be on re-forestation, ending meat consumption, restoring our waterways and healing our planet instead of a carbon tax that does nothing but strip more money from the people.

Recognize how fake mainstream media truly has been all these years. They’ve been exposed time again time again, doctoring photo’s, setting up ‘in the field’ shots like it’s a movie set, and completely twisting facts and presenting staged events.

PR firm Bell Pottinger, well-known for having many controversial clients, worked with the U.S. military to create propaganda in a secretive operation. You can read more about that here. It’s just another example of what goes on.

Here and here are a few articles that are well sources outlining the relationship that mainstream media has with governments, intelligence, corporations and academia.

Here is an article I published a few years ago about multiple mainstream media award winning journalists blowing the whistle with regards to what’s really going on.

The picture of above, believe it or not, is actually only a small example of what they regularly do. Harshly put, it’s pure brainwashing. For us to have a more accurate clue about what’s actually happening on our planet, we need to seek out other sources, do the research, and think critically. Gather with others and talk if that’s what it takes.

Thanks to social media, which they are desperately trying to censor and control now, the truth is getting out. More people are being inspired to let the world know what’s really going on. Seeing through deep state and mainstream tactics is vital to change our planet. Once we change the way we look at the world, the world will begin to change. We can’t keep repeating the same cycles if we are going to move past this type of deception and state of consciousness.

The good news is, we are AWAKE! The more they try to censor opposing narratives, the more they expose themselves.

Obviously, something very special is happening on the planet right now. More people are waking up, and starting to realize that as a collective, we don’t resonate with large portions of this human experience. We desire change.