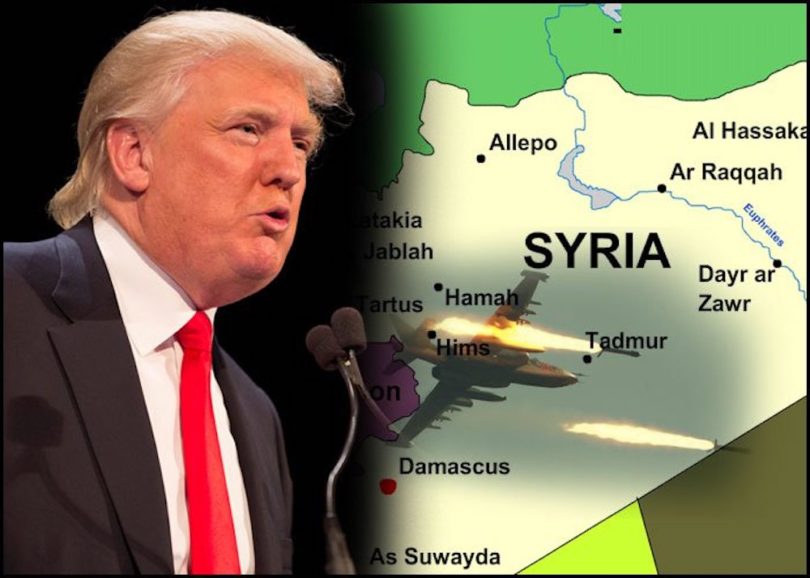 Establishment media mouthpieces are reporting that Donald Trump plans to pull 2000 troops out of Syria. Knowing that mainstream media will never label anything Donald Trump does as ‘good,’ I knew that this would be framed as an imprudent decision and a criticism of Trump.

For years, CE has stood with those politicians and academicians who have emphasized that the “war on terror,” is a complete ruse, and is mainly used as justification for the infiltration of another country to plunder natural resources and/or install a puppet government that best fits the needs of the western military alliance. This has been done through “false flag terrorism,” with two big examples being 9/11 and the supposed Assad ‘chemical weapons attacks‘ against his own people in Syria.

The ‘false flag’ narrative has been put out by independent media outlets for a long time, but mainstream media constantly hammers home the idea that this is ‘fake news,’ or sometimes pure ‘Russian propaganda’. The sad thing is that people still fall for this. Only those who further their research and actually go to conferences, read papers, examine documents and listen to honest politicians and researchers would see how obvious things are to figure out. When you give the matter a bit of attention it’s really not hard to see, despite the fact that there are still a lot of unknowns.

We are dealing with a criminal undertaking at a global level … and there is an ongoing war, it is led by the United States, it may be carried out by a number of proxy countries, which are obeying orders from Washington … The global war on terrorism is a US undertaking, which is fake, it’s based on fake premises. It tells us that somehow America and the Western world are going after a fictitious enemy, the Islamic state, when in fact the Islamic state is fully supported and financed by the Western military alliance and America’s allies in the Persian Gulf. – Dr. Michael Chossudovsky, University of Ottawa Professor Emeritus. (source) (source)

Syria Has Long Been A Target

This ruse is a new phenomenon, especially when it comes to Syria. A document entitled “Syria: Scenarios of Dramatic Political Change” was written in July of 1986 by the Foreign Subversion and Instability Center, part of the CIA’s Mission Center for Global Issues.

Its stated mission is to analyze “a number of possible scenarios that could lead to the ouster of President Assad or other dramatic change in Syria.” Though the document is 25 years old, it shows that the U.S. plans to influence and infiltrate Syria to create change that would suit their own interests, and its a plan that dates back well over 30 years. Here’s what Robert F. Kennedy had to say on the matter:

The CIA began its active meddling in Syria in 1949—barely a year after the agency’s creation. Syrian patriots had declared war on the Nazis, expelled their Vichy French colonial rulers and crafted a fragile secularist democracy based on the American model. But in March of 1949, Syria’s democratically elected president, Shukri-al-Kuwaiti, hesitated to approve the Trans-Arabian Pipeline, an American project intended to connect the oil fields of Saudi Arabia to the ports of Lebanon via Syria. In his book, Legacy of Ashes, CIA historian Tim Weiner recounts that in retaliation, the CIA engineered a coup, replacing al-Kuwaiti with the CIA’s handpicked dictator, a convicted swindler named Husni al-Za’im. Al-Za’im barely had time to dissolve parliament and approve the American pipeline before his countrymen deposed him, 14 weeks into his regime.”

The mainstream media has long been complicit with this form of CIA subversion, as detailed in the articles below.

The CIA & The Media: 50 Facts The World Should Know

Below is the recent Trump tweet that states that ISIS has been defeated. Now, think about that for a second. If you are aware that ISIS and other terrorist organizations like Al-Qaeda are heavily affiliated with the western military alliance, as mentioned above, this means that Trump has not only defeated ISIS, but also rogue parts of the CIA, US government and their affiliates.

Many former presidents have offered us clues as to what is really going on behind the scenes, but have never been able to wrest back control in the way Donald trump appears to be doing right now. As Theodor Roosevelt once said,

Political parties exist to secure responsible government and to execute the will of the people…From these great tasks both of the old parties have turned aside. Instead of instruments to promote the general welfare, they have become the tools of corrupt interests which use them impartially to serve their selfish purposes. Behind the ostensible government sits enthroned an invisible government, owing no allegiance and acknowledging no responsibility to to the people.”

To destroy the invisible government, to dissolve the unholy alliance between corrupt business and corrupt politics is the first task of the statesmanship of the day (source)

The New York Times reported that those within Trump’s administration have tried to dissuade Mr.Trump from a wholesale troop withdrawal, arguing that such a significant national security policy shift would essentially cede foreign influence in Syria to Russia and Iran at a time when American policy calls for challenging both countries.

Abandoning the American-backed Kurdish allies, Pentagon officials have argued, will hamper future efforts by the United States to gain the trust of local fighters, from Afghanistan to Yemen to Somalia.

It is worth remembering that even high-ranking military personnel from within the US government have ‘blown the whistle,” on behind-the-scenes tactics. In 2007 General Wesley Clark, a four star US General and NATO’s supreme allied commander, for example, listed a number of countries including Iraq, Iran and Syria that the US planned to take down long before 9/11, simply because they have “a good military and can take out governments.” (source)

Why Donald Trump Has Been Vilified

It makes little sense that Donald Trump has been so comprehensively vilified in the mainstream, and people like Hillary Clinton and Barack Obama are made out to be glorified celebrities, saviours, and even idols. Hillary and Obama did nothing but follow the will of their masters, and in doing so became war criminals responsible for the mass murder of millions of people. A number of bombs were dropped during their administration, all on the premise of fake information that was used to justify it. This is the reason why the Deep State wants to remain in Syria.

Rhodes scholar and historian Richard Dolan explained it quite well a few years ago:

For sure, the power elite closed ranks and did everything possible to ensure a victory for Clinton. This included not only the Democratic party (which previously played dirty pool against Bernie Sanders), but the entire mainstream media machine, the financial community, the EU, and even the Republican party itself. If nothing else, I had concluded that the media alone had done a sufficient job of demonizing Trump – multiple negative headlines daily for more than a year – to make him unelectable to the American people.

For more than a year, we have been told that Trump is a racist, sexist, xenophobe, liar, cheat, and narcissist. The attack bears all the marks of a coordinated effort among the major news outlets: CNN, NYT, WaPo, HuffPo, USA Today, and the rest. It reminded me very much of the concerted media attack against Brazil’s Dilma Rousseff which culminated earlier in 2016 in her impeachment and removal from power. In the case of Rousseff, we see what has been alternately described as a soft coup or aWall Street coup, rather along the lines of the “color revolutions” of a few years earlier (which are now largely understood as CIA-NGO orchestrated). In both cases, pretexts were created and hammered home by an insistent media that whipped up public opinion. In Brazil, it worked. It seemed like it would work in the U.S.

It is important to understand why Trump was demonized. To be sure, his character makes it easy. There is no shortage of narcissistic, sexist, or otherwise offensive statements in his repertoire from which to draw. But I have never and will never believe this is why he was demonized. Ultimately, Trump is a disruptor, and his disruption falls squarely against the two key pillars of the American ruling elite’s ideology: neoliberalism and neoconservatism.

It’s almost 2019, and the amount of evidence and transparency that’s occurring on this topic is significant. Information has been put out, and for anybody who really wants to find out what’s going on, they can. False flag terrorism and the existence of a  Deep State within the US government, and their allies, has existed throughout history. Roosevelt knew it, and so did Eisenhower when he told us that a mass potential for “misplaced power” exists inside of the military industrial complex.

This is why we’ve intervened in Syria, in Iraq and other places. This is why Gaddafi was killed and labelled as a murderous dictator, the same thing that has long been attempted with Bashar Al-Assad of Syria. If these people are murderous dictators, what were Hillary Clinton and Barack Obama, what was George Bush and Bill Clinton?

There is absolutely no doubt that Donald Trump represents something that the establishment hates. He is a puppet of the ‘powers that be’ to the extent others were and have been, and with what looks to be a looming peace in Syria, this is more clear than ever. We haven’t seen something like this since the days of John F. Kennedy, and this is exactly why he’s constantly vilified, and why so many people spew hate or even appear insulted if there is any sort of support for Trump. This is the result of people who have been programmed by mainstream media, and bypass looking into things a little deeper themselves.

When we are offended by simple topics and conversation, you know something is wrong.

There is a massive shift in consciousness that’s occurring on our planet, and mainstream media is drastically losing their ability to brainwash the majority. 10 years ago it seemed it was 80/20. Today, it seems as if it’s more so 60/40. We are reaching critical mass.