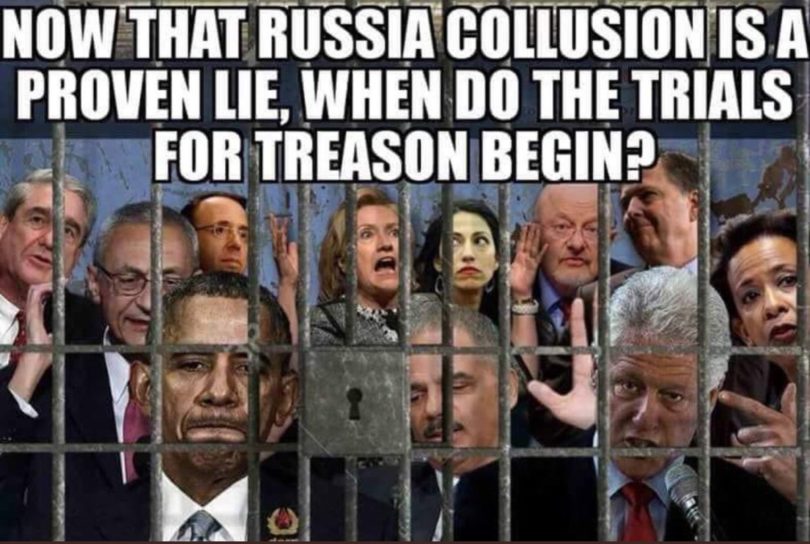 More than once have I said that we live in interesting times. Somehow, events that are popping up in the domain of politics in recent days are bringing that statement to a new level. A case in point: not so long ago were the days when politicians and other well-known government officials seemed to have a fair amount of immunity from accusations of wrongdoing.

Once the President of the United States was out of office, for example, he became a beloved figure, a speech-giver, an advisor, a charity fundraiser, and whatever wrongdoing he might have perpetrated while in office was not touched, let alone harped on in the media. The same generally held for high-ranking government officials, with the odd exception of a few fall guys (Oliver North and Scooter Libby come to mind) who are thrown like meat to a ravenously vengeful public when rage over high-profile cases of government corruption need to be tamped down.

But times are certainly different. And the meme just re-tweeted by Donald Trump should be as clear a marker as you can get that there will be no more sacred cows in this new era.

How Are Things Different?

Some could argue that things are different today because successful deal-maker, reality TV star and bufoonish entertainer Donald Trump is at the center of attention. Others might maintain that only the rise of social media could have brought such a carnival-like atmosphere into the realm of political affairs. I would say that the confluence of these two elements is certainly crucial to the mix, but what is even more fundamental is the fact that we are finally living in a time where the Deep State is not in charge.

Looking at the meme that Donald Trump re-tweeted, many of us who are following the political discourse around the existence of a ‘Deep State’ and which important political players are wearing the black hats will probably recognize all of these mostly former high-ranking officials without having to look them up. But if not, I will list them here for you, from left to right:

This is truly the first time in American history that a president is going straight to the public and saying how corrupt and controlled many of his predecessors were. For this reason, Trump will never be a member of the ‘Happy Former President’s Club,’ which has seen Barack Obama welcoming the likes of Bill Clinton, George Bush Jr. and George Bush Sr. to hang out and attend certain goodwill functions together. Actually, it was easy for the former presidents to work together, because whatever their so-called ‘political differences’ they had one thing in common–they had all sold out the American public to some extent in going along with the Deep State agenda. And those who played ball with the Deep State were always protected.

But that may be changing.

The Rise Of An Alternative Narrative

Backed by a powerful Alliance, Donald Trump is basically the first POTUS since John F. Kennedy who is refusing to play ball with the Deep State, and we have a true champion of an alternative narrative to the one that has been thrust upon us since we were born. Without the Alliance, Trump surely would have ended up sharing the fate of JFK already. The video below of then-campaigning candidate Donald Trump shows that he knew what he was in for and what his role would be when he decided to seek the presidency.

When that speech was made, far fewer people realized its meaning and significance than they would upon seeing it now.

This ‘alternative narrative’ was not the brainchild of Donald Trump, of course. There have always been dissenters of the mainstream, those renegades who could see beyond the veils of controlled mainstream perception and sought to reveal the truth. But it was only with the rise of the internet, social media, and handheld phones with camera capabilities that there was an avenue for a wide dispersal of this alternative information to the general public, who were beginning to awaken to alternative ways of seeing things.

It was gaining so much momentum, it forced mainstream commentators to start to label much of alternative news as ‘Fake News.’ However, because Donald Trump somehow managed to turn the tables by repeatedly telling us that it is Mainstream Media that is the ‘Fake News,’ the psyop seems to have backfired on the Deep State-Mainstream Media axis.

Recently, in what seems to be acts of desperation, the big Social Media conglomerates, long having been taken over by the Deep State to continue their agenda, have begun censoring some ‘alternative narrative’ content that is awakening the public and speaking out against the Deep State. But they continue to be flummoxed by the prospect of trying to censor the voice of the President of the United States, who more and more is using social media himself as his way of communicating directly to the people and bypassing all mainstream filters.

The very idea that there is a Deep State, that so many highly ranked government officials have been servants of this ‘shadow government’ long warned about, and that this Deep State has a singular aim to create a global dictatorship, is an idea that the general public is starting to awaken to. And if the Deep State can’t find a way to silence Donald Trump and stop him from putting out powerful memes and messages to build an alternative narrative using the very tools the Deep State has always used, then it won’t be long before the majority of the American public are asking, ‘When do the trials for treason begin?’

The revealing and takedown of the Deep State, who have operated with relative impunity in controlling public affairs, will indeed be an important component in our awakening. The fact that Donald Trump is able to send out such a meme to the public without facing the wrath of the Deep State is one particularly graphic sign among many that the Deep State has lost the balance of power, and indeed is in the process of being taken down. As such, our role in this is not to project vengeful anger once we become more aware of the crimes against humanity that the public actors in this meme and a multitude of others have been party to; our role is to patiently let the process of removing these people from positions of power and influence unfold in an orderly and lawful manner.

From this place of equanimity, not only are we better constituted to help others awaken to the truth, we will also be able to model the process of moving beyond the lower emotions of revenge, and allow ourselves to be inspired by the possibilities of creating a new world in our highest image once the Deep State bonds of political and economic slavery have been broken.