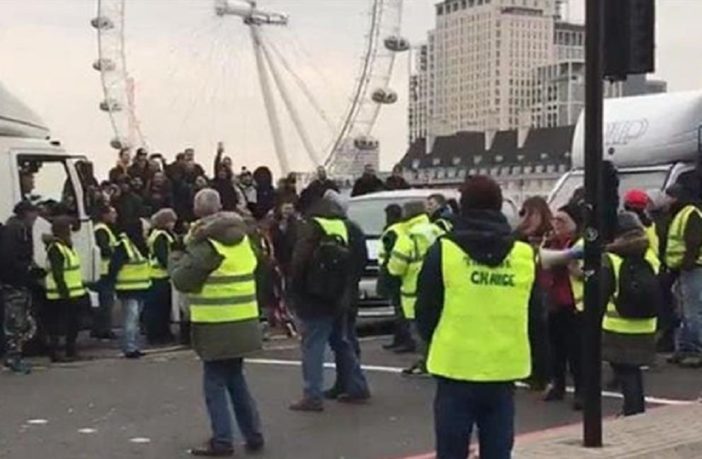 The Yellow Vest movement is not on course to end anytime soon, with British activists taking to the streets of London on Friday. They donned the appropriate yellow high vis vests and blocked traffic, chanting pro-Brexit slogans.

One yellow vest protester tells of their want to reclaim Great Britain as told to Sputnik: “We don’t want to be part of the federal European superstate that’s going to erode our rights and take away democracy.

“This is Britain. We are not European. We have never been European. This is our land and we are taking it back. If the political class don’t like it, they will see a revolution like they’ve never seen before.

“It is time to take up the spirit of Oliver Cromwell, rise up and reclaim what’s rightfully ours.”

The yellow vests were outside Downing Street, Westminster Bridge, Tower Bridge and London Bridge on Friday, saying they aren’t going anywhere, determined to support Brexit as well as other issues:

“The yellow vests is just a start. This will spread out to the whole country”.

As Prime Minister Theresa May is trying to push her Remainers’ Brexit deal through, the British Yellow Vests are saying what they want to see:

“We don’t want the deal. Dump the deal. No deal Brexit but trading under World Trade Organisation terms. Our fishing industry was decimated by the European Union.

“We have seen mass migration. We’ve the outsourcing of all of our factories going into the EU. We can’t have this anymore. This country is being raped and pillaged. It is time we stood up for what we believed in.”

One activist, when asked what the general opinion is of a second referendum on the nature of the deal, asserts:

“If there is a second referendum, there will be mayhem. We will make sure that the polling stations are unreachable.

“The will of the people has to be respected. If it isn’t — you will see riots that make riots in France seem like nothing.”