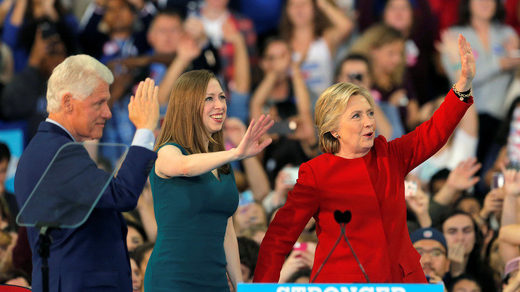 The mainstream media took no notice of a federal court filing that exposes a $84 million money-laundering conspiracy Democrats executed during the 2016 presidential election.By APRIL 24, 2018

Yet the mainstream media took no notice of last week’s federal court filing that exposes an $84 million money-laundering conspiracy the Democratic National Committee and the Hillary Clinton campaign executed during the 2016 presidential election in violation of federal campaign-finance law.

From Bundling To Money Laundering

Dan Backer, a campaign-finance lawyer and attorney-of-record in the lawsuit, explained the underlying law in an article for Investor’s Business Daily: Under federal law, “an individual donor can contribute $2,700 to any candidate, $10,000 to any state party committee, and (during the 2016 cycle) $33,400 to a national party’s main account. These groups can all get together and take a single check from a donor for the sum of those contribution limits-it’s legal because the donor cannot exceed the base limit for any one recipient. And state parties can make unlimited transfer to their national party.”

Suspecting the DNC had exceeded those limits, a client of Backer’s, the Committee to Defend the President, began reviewing FEC filings to determine whether there was excessive coordination between the DNC and Clinton. What Backer discovered, as he explained in an interview, was much worse. There was “extensive evidence in the Democrats’ own FEC reports, when coupled with their own public statements that demonstrated massive straw man contributions papered through the state parties, to the DNC, and then directly to Clinton’s campaign-in clear violation of federal campaign-finance law.”

On behalf of his clients, on December 15, 2017 Backer filed an 86-page complaint with the FEC, asking the FEC to commence enforcement proceedings against Hillary Clinton, her campaign and its treasurer, the DNC and its treasurer, and the participating state Democratic committees. The complaint, and an attached exhibit consisting of nearly 20 pages of Excel spreadsheets, detailed the misconduct and provided concrete evidence supporting the allegations. In short, here’s what happened and what the evidence establishes.

Think Of It Like A Shell Game With Millions Of Dollars

During the 2016 presidential election, Hillary Clinton, the DNC, and participating state Democratic committees established the Hillary Victory Fund (HVF) as a joint fundraising committee to accept contributions from large donors, some exceeding $400,000. So far, so good. To comply with campaign finance law, the HVF needed to transfer the donations to the specified recipients, whether the Clinton campaign, down-ticket Democrats, the DNC, or state committees.

Over a 13-month period, FEC records show some 30 separate occasions when the HVF transferred contributions totaling more than $10 million to the DNC without any corresponding record of the receipt or disbursement from the state parties, thus illegally leap-frogging the state Democratic parties.

On the other hand, of the contributions state parties reported as received from the HVF, 99 percent wound up at the DNC. They were transferred immediately or within a day or two, raising questions of whether the state Democratic committees truly exercised control over the money-something necessary under campaign finance law to allow a later-legal transfer to the DNC.

Again, the evidence is damning. According to Politico, “[w]hile state party officials were made aware that Clinton’s campaign would control the movement of the funds between participating committees, one operative who has relationships with multiple state parties said that some of their officials have complained that they weren’t notified of the transfers into and out of their accounts until after the fact.”

‘Using The Party As A Fundraising Clearinghouse’

But the Clinton campaign’s control of the contributions did not end once the funds reached the DNC, as the complaint filed with the FEC detailed. Rather, public statements by former DNC chairwoman Donna Brazile acknowledged that “[a]s Hillary’s campaign gained momentum, she resolved the party’s debt and put it on a starvation diet. It had become dependent on her campaign for survival, for which she expected to wield control of its operations.”

Gary Gensler, the chief financial officer of the Clinton campaign, which operated as Hillary For America “HFA,” out of Brooklyn, New York, likewise stated that the Democratic Party was “fully under the control of the Clinton campaign . . . . The campaign had the DNC on life support, giving it money every month to meet its basic expenses, while the campaign was using the party as a fund-raising clearinghouse.”

By excercising control over the DNC’s funds, including funds transferred from the HVF through the state parties, the contributions qualified as donations to the Clinton campaign for purposes of federal campaign finance law, and when properly accounted for exceeded the legal contribution limits.

The Supreme Court Made It Clear This Is Illegal

The illegality of this scheme isn’t a matter of debate. The Supreme Court made clear in 2014 in McCutcheon v. FEC that this exact scenario would violate the law. Here’s how the court laid it out: “[A] donor gives a $500,000 check to a joint fundraising committee composed of a candidate, a national party committee, and most of the party’s state party committees. The committees divide up the money so that each one receives the maximum contribution permissible under the base limits, but then each transfers its allocated portion to the same single committee. That committee uses the money for coordinated expenditures on behalf of a particular candidate.”

The Supreme Court then declared: “Lest there be any confusion, a joint fundraising committee is simply a mechanism for individual committees to raise funds collectively, not to circumvent base limits or earmarking rules. Under no circumstances may a contribution to a joint fundraising committee result in an allocation that exceeds the contribution limits applicable to its constituent parts; the committee is in fact required to return any excess funds to the contributor.” And “the earmarking provision prohibits an individual from directing funds ‘through an intermediary or conduit to a particular candidate.”

This “scenario could not succeed,” the Supreme Court explained, “without assuming that nearly 50 separate party committees would engage in a transparent violation of the earmarking rules (and that they would not be caught if they did).” Caught Clinton was. Yet the FEC failed to act on Backer’s complaint, even though federal law authorizes any person to file “a complaint with the FEC alleging a violation of federal campaign finance law.”

But in this case, the FEC did nothing, other than pressumably notify the DNC and Clinton of the charges. Accordingly, last week Backer turned to federal court, seeking to force the FEC to fulfill its statutory duty, as provided by federal law.

Specifically, the controlling statute provides that should the FEC fail to act, “during the 120-day period beginning on the date the complaint is filed,” the aggrieved party “may file a petition with the United States District Court for the District of Columbia,” alleging the FEC’s “failure to act is contrary to law, [the court] may direct the Commission to conform with such declaration within 30 days.”

Given the overwhelming evidence of illegal campaign contributions Backer detailed in the complaint he filed with the FEC against Clinton, the DNC, and the state Democratic parties, there is more than sufficient evidence for the FEC to have “reason to believe” they violated federal campaign finance law.

So why didn’t the FEC act? The answer to that question came Thursday, when FEC Vice Chair Ellen L. Weintraub issued a statement in another case, involving another complainant and another provision of federal campaign-finance law, but which nonetheless showed the FEC is dysfunctional.

As noted above, the FEC can investigate a complaint only upon a finding of “reason to believe” by four commissioners. But the six-member FEC currently only has four commissioners. By statute, the commissioners must come from different political parties, and by practice, the Senate confirms newly nominated commissioners in pairs, one Democrat and one Republican. Democrats, however, have yet to name a replacement, holding up the confirmation process and leaving in place for the foreseeable future a likely deadlock.

This deadlock, though, might prove fatal to Clinton and the DNC because, as Weintraub explained in her statement, Congress provided for just such a contingency: “Fire alarms are sometimes housed in boxes labeled ‘Break glass in case of emergency.’ The Federal Election Campaign Act has such a box; it’s the provision that allows complainants to sue respondents directly when the Federal Election Commission fails to enforce the law itself (52 USC § 30109(a)(8)(C)). In the 44-year history of the FEC, this provision has never been fully utilized. Today, I’m breaking the glass.”

Weintraub then went on to say that she believed the complainant in that case should pursue litigation, “as Congress provided for under the Federal Election Campaign Act,” because by placing the matter in private hands, the goal of enforcing “America’s campaign-finance laws fairly and effectively” can be best achieved. Just yesterday, Citizens for Responsibility and Ethics in Washington took Weintraub’s hint and filed suit in federal court directly against the nonprofit group American Action Network, alleging violations of federal campaign-finance law.

Using Democrats’ Tactics Against Them

While Weintraub is a Democrat and complained about charges against the right-leaning American Action Network, the same glass-breaking provisions provide Backer the right to pursue his case against the DNC and Clinton directly.

Placing the matter in Backer’s hands, as an advocate for his client the Committee to Defend the President, in a federal court, and with the tools of discovery-including the ability to subpoena bank accounts, DNC communications, and question party officials and bundlers-promises to shine more sunlight on the Clinton and DNC shennanigans than the FEC’s behind-closed-doors consideration and investigation. Also, the Clintons and party officials should not be the only ones concerned: Every big-time donor in on the scheme and acting with the requisite intent faces criminal prosecution, as well.

Yet even with the overwhelming evidence of tsunami-level campaign-finance criminality-more than $84 million-the media instead chasesthe cloud cast over President Trump because of the $130,000 payment his attorney, Michael Cohen, made to Stormy Daniels, and claims that payment constituted an illegal campaign contribution. One wonders what it will take to break through the mainstream media blackout. Maybe a few pointed unpresidential tweets from our commander-in-chief?