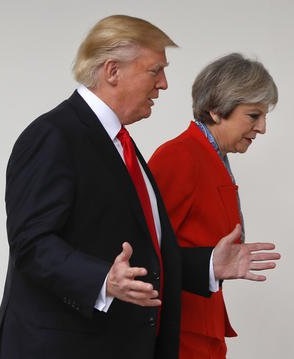 An article published originally in the U.K. Telegraph, and republished via Yahoo News outlines growing fear within the U.K. government and British intelligence officers surrounding President Trump discovering how far they were involved within “Spygate”.

The facts are not uncommon to anyone who has done research into the events of 2015 and 2016; however, the interesting aspect surrounds the current level of anxiety which indicates something is soon to become very public.

The central concern of the British officials surrounds President Trump declassifying evidence that will outline a coordinated effort by a weaponized U.S. intelligence apparatus to use their foreign counterparts for two aspects:  (1) to spy on the Trump campaign in 2016; and (2) to help carryout an entrapment scheme that would become the baseline for the FBI’s counterintelligence operation which evolved into Mueller’s Russian election interference investigation (aka. the “insurance policy”).

According to the Telegraph outline the current U.K. Prime Minister is intentionally being kept out of the communication loop because British intelligence are fearful President Trump might ask about her knowledge.  Keeping Theresa May blind to the U.K operations against Trump provides plausible deniability if questioned.  Additionally, all British embassy staff in the U.S. have been told to say absolutely nothing if questioned.

All of the activity described within the article outlines a significant sense of concern, within the highest elements of U.K. government, that President Trump will discover how far they went to see him eliminated in the 2016 presidential election.

Of course none of this is surprising.

In 2016 candidate Trump supported Brexit; the professional political class in the U.K. were vehemently against it.  Additionally, candidate Trump was openly challenging the structure of NATO and demanding changes to the alliance.  This was antithetical to the interests of the U.K. government and likely sent shockwaves through their collectivist system when candidate Trump won the GOP nomination.  The Brits had a strong motive to see Trump destroyed and aligned with weaponized U.S. intelligence toward that end.

As President, Mr. Trump, has held true to his campaign promises and forced the British -and the EU writ large- to be more responsible for their own military security.  President Trump has challenged the post-WW2 NATO structures and forced the EU to pay more for their defense.  Many member nations are vocally unhappy with this shifted landscape because it means less money for liberal/socialist causes. [Note: Including Canada]

Lastly, the U.K. and E.U. (mostly German anxiety) are facing a much tougher trade objective as outlined by President Trump.  The trade conflict is costing them billions in addition to their increased need to spend on their own defense via NATO to keep Trump off their back.  He might be just one man, but President Trump has them surrounded.

President Trump is not allowing the same one-way benefits within the U.S. trade relationship with the EU; and as he highlighted with the use of tariffs, he is not hesitant to smash the EU economy (mostly Germany) with crippling auto-tariffs if needed.

Trump is leveraging access to the U.S. markets as pressure on the Europeans to comply with U.S. demands.  The Europeans, including the British, are not used to this level of confrontation from the U.S.  Their economic frames of reference surround acquiescence from prior American presidents.   They are increasingly unnerved and the horrible President Trump simply doesn’t care.

And then there’s the newly emphasized Iran sanctions… the economic MOAB that threatens any/all European interests who might dare to get caught doing business with the Iranian regime.  President Trump has shown he is not the least bit hesitant to pull the trigger on Treasury penalties against any nation or multinational interest who would defy the sanctions.

So yeah,…. as if the landscape wasn’t tenuous enough already. Imagine what’s going on behind the scenes where the high-brow British government are wondering what Deplorable Trump will do if their own intelligence officials are forced to admit they attempted to interfere in his election.

Oh dear…  ‘Have another crumpet’!