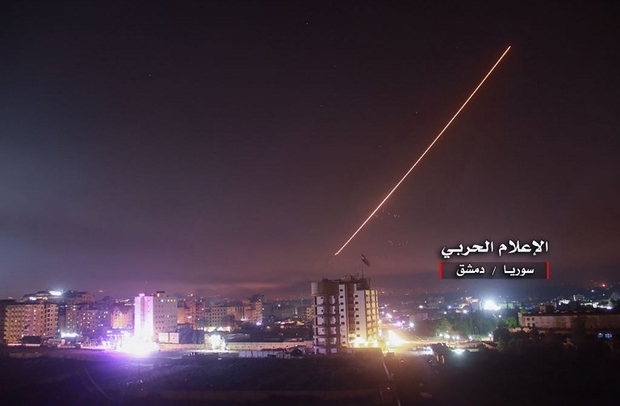 Target was flying over town of Kiswah, south of Damascus, when it was shot down, Syrian state media report on Thursday

The Syrian air force shot down a “hostile target” that was flying over the town of Kiswah, south of the capital Damascus, state media reported.

Syria’s state media cited a military source on Thursday, but did not specify what the target was or where it came from.

Syrian opposition sources on the ground told AFP news agency that the target was shot down near an area where the Lebanese group Hezbollah has several bases. Hezbollah is an ally of Iran and Syrian President Bashar al-Assad.

Israel has struck dozens of targets in Syria over the course of the seven-year conflict, saying its actions are targeting Iran and its allies.

Still, in September the Israeli army was accused of being indirectly responsible for a Russian military plane being shot down near the Syrian coast, killing 15 Russian crew members.

That incident created tensions between Israel and Russia, another Syrian government ally, with Moscow saying it reserved “the right to take commensurate measures in response”.

“Israeli forces bombarded for an hour positions in the southern and southwestern suburbs of Damascus as well as in the south of Syria at the border of Quneitra province,” the Observatory’s chief Rami Abdel Rahmane said.

Rahmane did not disclose how the Observatory obtained that information.

“Our air defence forces shot down an Israeli warplane and four missiles before they reached the targets,” the source said, according to RIA, as reported by Reuters news agency.

The source told RIA that all the missiles targeting the town of Kiswah were intercepted, Reuters reported.

An Israeli military spokesman said on Thursday that no Israeli warplanes had been shot down. “Its bogus,” a spokesman told Reuters.

Also on Thursday, the Israeli army said a missile was fired at the Israeli-occupied, Syrian Golan Heights, but that it remains unclear where the projectile fell, Haaretz reported.

Israeli soldiers were scanning the area, the Israeli newspaper said.