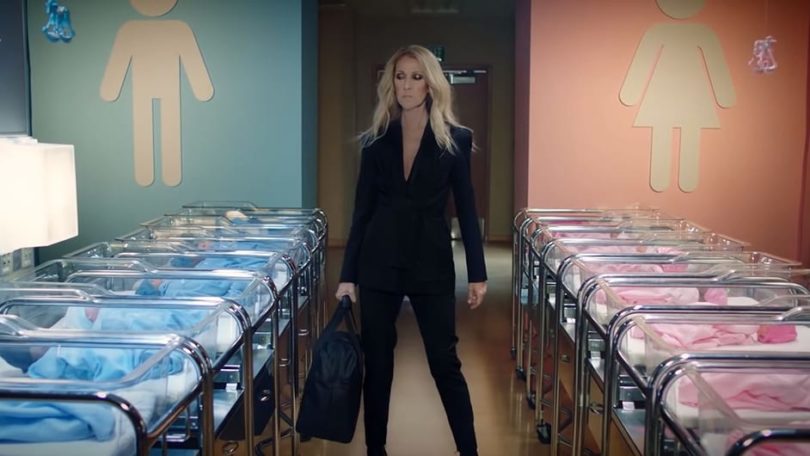 Céline Dion is the face of a new “genderless” fashion brand for babies named CELINUNUNU. Everything about it is wrong and creepy. Here’s a look at the disturbing symbolism surrounding it.

I always appreciated the fact that Céline Dion was a somewhat wholesome figure in a music business that is heavily bent on depravity. However, since the death of her husband and manager René Angélil, she’s been involved in some increasing weirdness.

Since wrapping up her Las Vegas residency, Céline apparently found a new mission: To “free” newborns from gender binarity. Because that was the main complaint of newborns. To do so, she released CELINUNUNU, a “gender-neutral” clothing line for babies, created in conjunction with the global fashion brand NUNUNU.

Some might consider this piece of news to be yawn-worthy as CELINUNUNU is yet another over-priced fashion brand using a celebrity endorsement to generate sales. However, there is more to it. NUNUNU is already a huge brand in Hollywood. The brand’s website contains an extensive picture gallery of celebrities’ children wearing their creations such as Angelina Jolie, Kourtney Kardashian, Hilary Duff and many more. By their own admission, the brand is about more than fashion. It is a way to “shape children” for the future.

The CELINUNUNU features Céline Dion sneaking into a maternity ward and altering the look of other people’s children. While most news sources found the video “hilarious”, many were also disturbed by the video’s strange messages.

Celine then sneaks inside the hospital’s maternity ward and discovers something unacceptable.

She realizes that boys are dressed in blue and the girls in pink. The horror. Céline is completely disgusted.

Then, Céline spreads around some black powder and everything changes. For the worst.

The “boy” and “girl” figures on the wall are replaced with the brand’s logo. Everything is now black, white and creepy.

This baby wears a hat with skulls. Yes, let’s celebrate a new life by making it wear symbols representing death. The shirt says “New Order”… As in “New World Order?”.

Then, security arrests Céline and takes her out of the hospital. Good. Let’s make sure this doesn’t happen again.

To sum up the video, it’s not good. Of course, Céline Dion is merely the face of the brand. The entire line was created by NUNUNU, an Israeli fashion for children that is already a global hit.

Something is Wrong With NUNUNU

led completely by their intuition, co-owners and designers iris adler and tali milchberg created children’s clothing collections that broke stereotypes and dodged accepted norms. their need for a basic dna and a unisex offering in kids fashion, created a global trend that is now an inspiration worldwide. driven by an agenda that defies the traditional dichotomy of boy/girl clothing, iris and tali showed that in the world of real individuals not everything is so black and white.

Yes, to quote their own words, the brand is indeed “driven by an agenda”.

This is the picture topping the brand’s About page: A child whose face is held by a skeleton. One of the child’s eye is hidden – a confirmation that this is all about the elite’s agenda.

NUNUNU’s agenda is not only about gender-neutrality. It is about something much darker. A quick trip down the brand’s Instagram Page reveals some disturbing material: The sexualization of children, satanism and Monarch mind control. In short, all of the obsessions of the occult elite.

This is part of the brand’s “Holiday” collection. Don’t tell me they don’t know what a “Ho” means. I mean, come on.

Are they aware that the song Let’s Get Physical is about having sex? Why are there children under that sign?

A baby with a devil-horns hat. So cute.

This looks like some creep put his big dirty hand on that girl’s chest.

This kid is hiding one eye while wearing a shirt featuring a skull with one eye hidden. Also, his pants feature all-seeing eyes. How can they make it more obvious to you?

The brand’s IG account also contains various pictures and paintings that are tagged #inspiration. Nearly all of them are creepy, disturbing and full of symbols referring to the darkest practices of the occult elite. 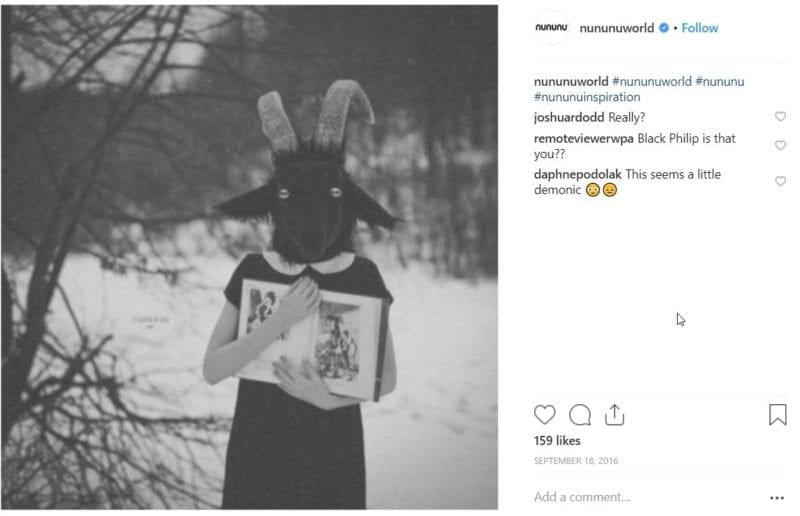 This is 100% satanic. Yes, this is on the IG account of a children’s clothing brand that is extremely popular in Hollywood. 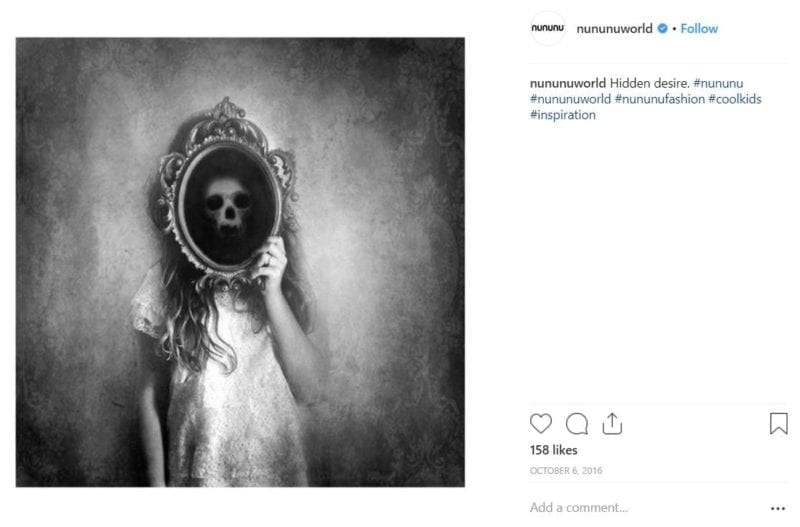 The caption of this image is “Hidden Desire”. Huh? My caption would be “What is wrong with these people?”. 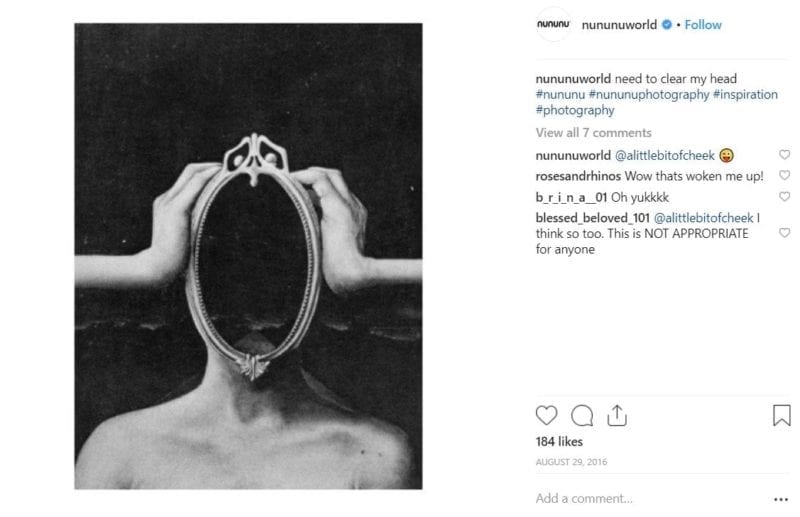 This is captioned “Need to clear my head”. Trauma-based mind control is about “clearing the head” of the slaves through abuse. 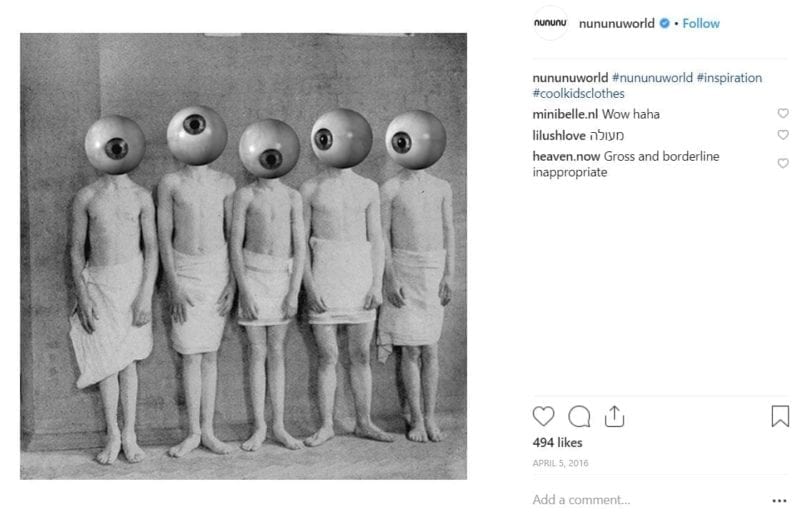 Young guys in towels. Their heads were replaced with eyeballs. As the comment says: “Gross and borderline inappropriate”.

An animal skull used to make the one-eye sign: The perfect inspiration for children’s clothings.

Everything about this pic screams out “ruined childhood”.

There are many other images, but we’ve seen enough. All of them point in the same direction: Occult elite depravity and the shameless preying on children. All of this crap is “clothed” in the self-righteous vocabulary of gender neutrality and “freeing children”. And who better than Céline Dion (and her wholesome aura) to make this appealing to moms with money to burn?