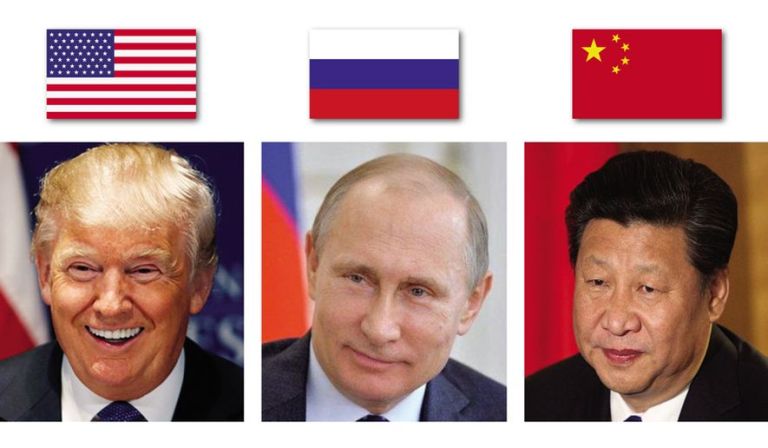 Trump-Putin-Xi: Reflections on What Is Not Visible…

I always appreciate the thoughts of Andrey Kortunov and read “Trump-Putin Meetings: Do Elephants Need Celibacy”[1] with great interest.  While I agree with most of what my colleague has written, I want to make a few points that should be encouraging to all. I especially want to note that our two Presidents met on the 11th despite no meeting being scheduled – I dare to hope it focused on stopping any NATO plans for starting World War III.[2]

01 Xi is the largest elephant. No meeting between Trump and Putin can ever take place without Xi being in the room, at least metaphysically.[3] Unlike the US, which has wasted trillions of dollars on Zionist wars of profit,[4] China now owns the Southern Hemisphere – for decades they have been investing in seaports, airports, high speed rail and major highways[5] while the US has been poisoning its population with bad food and bad medicine and bad water and bad air, and Russia has been fighting to restore its strength in the face of both the Gold War that gutted the Russian economy on behalf of the Deep State,[6] and the Russian demographic crisis.[7]

02 All the meetings that are visible to the public are theater. I cannot over-stress this point. Virtually every meeting taking place today that is known to the public and covered by the fake news media is a cosmetic meeting of no strategic importance. The serious and strategic meetings are dealing with the global financial re-set, are not public, and are not reported in the media.[8]

03 Angela Merkel and Emmanuel Macron are irrelevant. They have been marginalized by the triumvirate (Xi-Putin-Trump) at the same time that the Rothschilds have been stripped of their control over the global economy. The British are wallowing in self-pity as they see the future – not only will the Commonwealth break up in the next ten years, but the Queen of England specifically and royalty across Europe generally are likely to be exposed as Satanists and pedophiles to the point of total disgrace.

04 Massive changes are taking place behind the scenes in the world of banking. Central Banks are certain to be nationalized and in the US the Federal Reserve is already under control at the same time that the Secretary of the Treasury is said to be wearing an ankle bracelet. Gold backed currency, the death of SWIFT, the complete restructuring of the “gray” screens, the recapture of up to $15 trillion stolen from the US by the Deep State, even a massive global debt jubilee (in the US, student debt and elderly health debt particularly) are all on the table.[9]

05 Arrests are imminent but in smaller numbers than most expect.[10]Retirement and death by choice will gut the Democratic Party at the same time that arresting Dick Cheney and all those US traitors who enabled 9/11[11]will make possible the arrest of the Clintons and their extended criminal network – this will change US politics forever. My personal top targets for arrest and indictment for treason are Chuck Schumer and Debbie Wasserman Shultz. The impunity with which the Zionists have controlled the US Congress is of very special interest to me.[12]

06 Not certain, but increasingly possible, is the closure of all US bases around the world. If Trump does not do this whoever follows Trump is almost certain to do this. The cessation of US elective wars and covert operations is a vital precondition not only for peace around the world, but for the restoration of the US economy.[13] Every aspect of US society has been undermined by the national security state – it will take a quarter century to undo this damage.[14]

07 Not certain, but possible, is a most unconventional challenge for the US Presidency. Imagine this: eight candidates for the presidency, one from each of the major and minor parties plus an Independent, all campaigning together in a national tour that fills the largest auditoriums – each respectful of one another, each offering a coalition cabinet and balanced budget, each committed to #UNRIG – election reform. This will overshadow and almost certainly defeat the two-party tyranny candidates.[15]

I do not think of our two Presidents and the General Secretary as elephants, I think of them as angels – angels most powerful. There is a holy spirit here on Earth, and every lie being told today – from the alleged Pittsburg synagogue false flag event[16] to the recent California fires that were clearly manufactured by Directed Energy Weapons (DEW) – the forced relocation of major communities by microwave arson[17] – is another razor cut on the body of the Deep State.

It is my strong personal view that the next revolution on Earth will be one of public education,[18] and I venture to suggest that this is where Russia could be most potent – if there is to be a balance of power between China, the US, and Russia, then I venture to suggest that Russia is neglecting its potential – across eleven time zones – as a force for public education.  The truth at any cost lowers all other costs. Neither China nor the US appear inclined to create a local to global truth channel that inspires every living being with holistic analytics, true cost economics, and Open Source Everything Engineering (OSEE).

Seventeen Sustainable Development Goals (SDG). All impossible to achieve with the current Western economic and legal model. All easily achieved, at 10-20% the cost of the old model, if Russia embraces the possibilities and become the educational engine – the moral engine – for us all.[19]

[2] An alarm was raised, initially by a Norwegian who desires to remain anonymous, and then brought to the attention of both the White House and the Kremlin. Robert Steele, “Has the Deep State Used NATO to Make War with Russia Inevitable? Should President Trump Recall General Scaparotti & Suspend Trident Juncture by 15 November? UPDATE 3: Putin Likely To Raise Issue in Paris on Sunday,” Phi Beta Iota Public Intelligence Blog, 7 November 2018 and Robert Steele, “While Moscow Talks About Treaties, the Deep State is Starting World War III – Now – This Month!,” Russian International Affairs Council, 9 November 2018. See also Benjamin Fearnow, “Trump and Putin Meet in Paris, After Exchanging Smiles and Gestures, Despite Promise to Stay Apart,” Newsweek, 11 November 2018.

[3] Robert Steele, “Xi, Putin, & Trump for Life — A Few Thoughts: What Is We Could Bury the Deep State & Create Peace and Prosperity for All?,” Russian International Affairs Council, 26 March 2018.

[8] Immediately after 9/11 a group known variously as the Graybeards (centered on the US Navy) and the White Hats (all services) is said to have concluded that 9/11 represented the complete subversion of the US Government by the Zionists and that some form of coup or “sponsored” president was needed.  I have no direct knowledge but believe that a battle for the soul of America has been waging since 2001. Trump is a transition president. The final stage of America’s rehabilitation will be led by a president able to field a coalition cabinet, publish a balanced budget, and identify a number of specific Constitutional corrections. On the latter, see for example, Robert Steele, “15 Constitutional Amendments — Protect, Modify, Cancel — UPDATE 1,” Phi Beta Iota Public Intelligence Blog, 11 October 2018.

[9] Although the BRICS have been working on a new economic ecology including alternatives to the World Bank, SWIFT, and other elements of the Deep State financial network, only recently has it been realized that the election of Donald Trump activated a US counter-part to the Chinese-Russian plan, in full collaboration. A few people are writing about this, see for instance Wayne Jett, “Trump in Context: White Hats vs. Ruling Elite,” Classical Capital, 23 October 2018. Completely invisible to the Mainstream Media (MSM), a financial revolution is underway, and there are only three people on the planet with the whole picture: Xi, Putin, & Trump.

[10] The vast majority of the sealed indictments appear to be part of a neutralization tactic – those under indictment understand that if they cooperate and do not obstruct the decapitation of the Deep State, they will be allowed to walk free (while losing their wealth and power).

[11] The greatest US political criminal in modern history, George H. W. Bush, appears to be enroute to a peaceful death with no public recriminations (I do not agree with this decision).  Dick Cheney is the last man standing from that crime family; I fully anticipate his being indicted by a criminal grand jury, along with Larry Silverstein and others. The best available overview that names names is Robert Steele (contributing editor), Memoranda for the President, 9/11 Truth: From Campaign Promise to a Presidential Speech on 9/11 2018?, Earth Intelligence Network, 7 July 2018. Certified Delivered to the White House on 8 August 2018. The individual memoranda are in full text online to enable their being read in other languages.

[12] I have been very naïve about the pernicious subversive threat represented by Zionism, which is not to be confused with Judaism. It was not until the Zionists attacked Congresswoman Cynthia McKinney and me and our joint program, #UNRIG – Election Reform Act – that I understood the degree to which Zionists control just about everything in the USA including the social media. My account of how the Zionists attacked us six ways in ninety days is provided at Robert Steele, “How The Deep State Controls Social Media and Digitally Assassinates Critics: #GoogleGestapo – Censorship & Crowd-Stalking Made Easy,” American Herald Tribune, 7 November 2017.

[13] President Trump has the right instincts but is over-whelmed by the combination of the financial revolution on the one hand, and all those who stand in opposition to him, including figures such as John Bolton and Mike Pence, both of whom appear to be more loyal to the Deep State and their own ambitions than they are to the President and the Republic. I am talking to various individuals who are considering a run for the presidency in 2020 and 2024 and what I find in common among them is a deep appreciation for the need to shut down the US military-industrial complex and terminate the two-party tyranny that disenfranchises 70% of the voters while working for the 1%.

[14] The national security state — now the national security & mass surveillance police state – has distorted everything.  Scientific research, for example, is mis-directed by the profligate spending of the Department of Defense and the starvation of all other departments, and distorted by the defense contracting standard of “government specification cost plus.” Cf. Chuck Spinney, “Killing America – Government Specifications Cost Plus,” Phi Beta Iota Public Intelligence Blog, 14 November 2012 and also “Why Boeing is Imploding–Spinney, Sprey, & Reality vs Political Engineering & Government Spec Cost Plus,” Phi Beta Iota Public Intelligence Blog, 8 February 2011.

[15] The Democrats control 17% of the eligible voters while the Republicans control 13%. 70% of all US voters are disenfranchised. For the first time in history a concept has emerged to mobilize the 70%, combined with the Sandernistas on the left and the Tea Party Patriots on the right, to bury the two-party tyranny. Learn more at Robert Steele and Cynthia McKinney, “Former Representative and Intelligence Official Team Up to Unrig Elections,” Independent Voter Network, 26 September 2018. One hundred book reviews on democracy lost and found are included in Robert Steele, “Democracy Riots – We are all black now, deal with it! (Trump Revolution 02),” Phi Beta Iota Public Intelligence Blog, 22 March 2016.

[18] Education, intelligence (decision-support), and research are the three domains that must be managed together and in the public interest. Holistic analytics, true cost economics, and Open Source Everything Engineering (OSEE) are the elements of the solution for creating a prosperous world at peace at 10% the cost of the corrupt Western model of mixed political and financial crime, what Matt Taibbi calls “Griftopia.” Robert Steele, For the President of the United States of America Donald Trump: Subject: Eradicating Fake News and False Intelligence with an Open Source Agency That Also Supports Defense, Diplomacy, Development, & Commerce (D3C) Innovation to Stabilize World. Earth Intelligence Network, 2017.