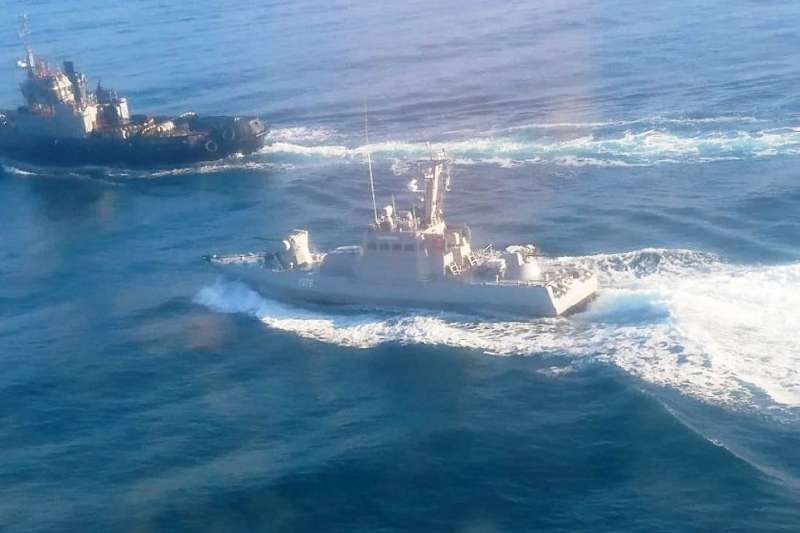 Earlier today Russian Navy, Coast Guard and Aerospace Forces intercepted and captured three Ukrainian vessels as they attempted to pass through the Kerch Strait en route to Mariupol. Russian authorities claim the Ukrainians failed to coordinate the passage and illegally entered Russian territorial waters. Ukraine claims their ships were illegally seized during a routine transit of the Strait. A detailed account of the incident, including a video of the deftly executed collision with the tugboat, can be read on the SouthFront site and many other sites by now.

These types of incidents occur from time to time. Remember the Navy patrol boats seized by the Iranians? They’re eventually resolved after much huffing and puffing and diplomatic activity. What strikes me about this incident is the lengths the Russians went to in stopping one Ukrainian tugboat and two small gunboats. The passage under the Kerch bridge was blocked by a large cargo ship. Two each Su-25 aircraft and Ka-52 attack helicopters flew overhead. The surface fleet consisted of several Sobol and Mangust class fast patrol craft, and a Svetlak class corvette. That tugboat was not going to pass through the Strait or get close to that new Crimean Bridge. Was there more to this than a mere provocation or coordination SNAFU? The following anonymous comment is from a SouthFront article. It may be just a conspiracy theory from a tinfoil hat wearing crazy. The commenter definitely has a flair for the dramatic. It may be disinformation. But what if there’s some truth in it? If so, holy crap!

Very important Info appeared briefly on Russian media (before being scrubbed) that a NATO SADM, possibly a Diver deployable device, was being transported by Ukrainian and British Special Forces to the Kerch Straight to be used on the Crimean bridge. The device was being tracked by the Russians and they knew it had been loaded on to a Ukrainian Tug (escorted by 5 warships!! – 3 in the Black Sea, including one NATO vessel, and 2 waiting in the Sea of Azov).

This is why the Russians acted!

They never react with force and have never blockaded the Sea of Azov. Ground attack jets and Helicopter gunships, plus a warship armed with ASM and Torpedos were waiting.

This level of force would not be used just for a tug and a few old Ukrainian ships. But a tug carrying a tactical nuclear device about to bring down one of the worlds most strategic bridges, a bridge hated by NATO – as per the recent Op Ed in the ‘Washington Examiner‘ (Ukraine should bomb the Crimean Bridge).

Ukraine is now in panic mode and there may be direct NATO intervention if the to cover this, if the Russians make this public.

The device may have come from the UK.

The UK have been psychologically preparing their people for a war with Russia.

The SADM explosion would have brought down the bridge and melted the foundations, but looked like a conventional IED blast from above due to the underwater detonation and relatively low yield of less than 1KT.

This was a WW3 level provocation STOPPED by the Russian FSB and SF’s!

All traces of these reports are being scrubbed as I write!

Get this out before the story is completely scrubbed.