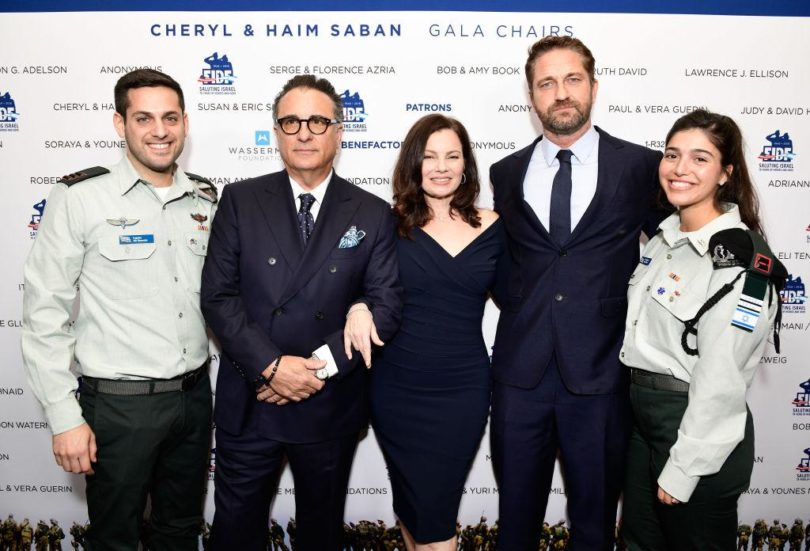 This year’s sold-out Western Region event at the Beverly Hilton Hotel welcomed more than 1,200 supporters of Israel, including prominent actors and singers like Ashton Kutcher, Pharrell Williams, Gerard Butler, and Katharine McPhee.“We are thrilled that so many members of our community, including major Hollywood figures, are coming together to help us support the brave men and women of the [Israeli army].” said FIDF National Board Member and Chairman of the event, Haim Saban. “Standing behind these heroes is one of my greatest honours in my life.”

The event featured a programme that told the 70-year history of Israel through the accounts of soldiers and the military’s various campaigns against the Palestinians.

Last year, FIDF raised $53.8 million at the same event; contributions have been increasing annually for the past three years. In 2015 the gala raised $31 million, half of this year’s total.

According to a press release by the organisation, the funds raised will be used to “provide much-needed and well-deserved services such as academic scholarships to combat veterans, financial assistance for soldiers in need … crucial aid for wounded veterans and the families of fallen soldiers, weeks of rest and recuperation for entire IDF units, as well as educational, cultural, and recreational facilities.”

Last month, the FIDF’s New York event raised $32 million for members of Israel’s occupation forces, attended by many of the city’s most prominent business people and philanthropists.

Among the biggest donors to the gala were Or Lachayal – an organisation which works to “strengthen the Jewish identity of the Israeli army” – which pledged $2.5 million and Nefesh B’Nefesh – which promotes Jewish immigration to Israel – which pledged $1.3 million.

FIDF has a long history of fundraising for Israel’s occupation forces; it operates 20 offices across the United States and Panama, according to its own website.

Support for the army from US organisations and the US government has been a cornerstone of Israel’s ability to continue its ongoing occupation of the West Bank and Gaza Strip. In October, the largest ever US military aid package to Israel – worth $38 billion over a ten year period – entered into force.