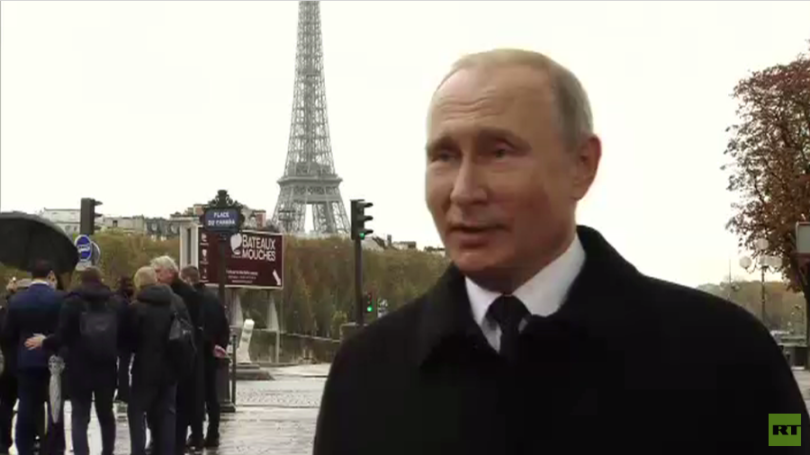 Europe’s desire to create its own army and stop relying on Washington for defense is not only understandable, but would be “positive” for the multipolar world, Vladimir Putin said days after Donald Trump ripped into it.

“Europe is … a powerful economic union and it is only natural that they want to be independent and … sovereign in the field of defense and security,” Putin told RT in Paris where world leader gathered to mark the centenary of the end of WWI.

He also described the potential creation of a European army “a positive process,” adding that it would “strengthen the multipolar world.” The Russian leader even expressed his support to French President Emmanuel Marcon, who recently championed this idea by saying that Russia’s stance on the issue “is aligned with that of France” to some extent.

Macron recently revived the ambitious plans of creating a combined EU military force by saying that it is essential for the security of Europe. He also said that the EU must become independent from its key ally on the other side of the Atlantic, provoking an angry reaction from Washington.

The US President Donald Trump scathed the idea by calling it “very insulting” and demanding that Europe repay the US for its “subsidizing of NATO” instead. The US and French leaders then attempted to smooth out the differences as they agreed on the need for a “stronger Europe” and called the spat a “misunderstanding.”

Trump goes from ‘very insulting’ to ‘we want to help Europe but it has to be fair’ in just one day https://t.co/Qc91xEWZmc

However, they seemingly failed to agree on a compromise on the issue as Trump still insisted on sharing the “burden of NATO” while Macron showed he was not ready to give up on his idea of a European force.