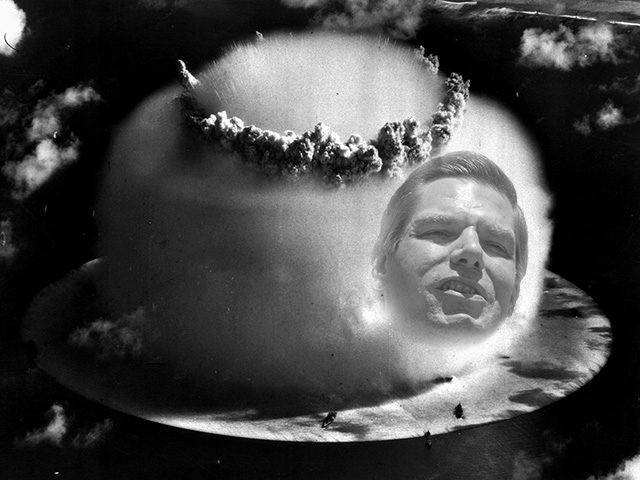 The exchange began with conservative Twitter commentator Joe Biggs responding to a story on Swalwell’s Thursday op-ed in USA Today, titled “Ban assault weapons, buy them back, go after resisters.” “@RepSwalwell wants a war,” Biggs wrote. “Because that’s what you would get.”

So basically @RepSwalwell wants a war. Because that’s what you would get. You’re outta your fucking mind if you think I’ll give up my rights and give the gov all the power. https://t.co/bK1GVyjFej

Swalwell responded by noting the government’s nuclear arsenal, writing: “And it would be a short war my friend. The government has nukes. Too many of them. But they’re legit. I’m sure if we talked we could find common ground to protect our families and communities.”

So basically @RepSwalwell wants a war. Because that’s what you would get. You’re outta your fucking mind if you think I’ll give up my rights and give the gov all the power. https://t.co/bK1GVyjFej

Biggs responded by asking, “So our government would nuke its own country in order to take guns? Wow.”

Swalwell countered by asking Biggs to quit being “dramatic” about the casual reference to weapons of mass destruction:

Don’t be so dramatic. You claiming you need a gun to protect yourself against the government is ludicrous. But you seem like a reasonable person. If an assault weapons ban happens, I’m sure you’ll follow law.

Don’t be so dramatic. No one is nuking anyone or threatening that. I’m telling you this is not the 18th Century. The argument that you would go to war with your government if an assault weapons ban was in place is ludicrous and inflames the gun debate. Which is what you want. https://t.co/oX0rY7Nbs1

On May 21, 2018, Breitbart News reported that Swalwell pushed an “assault weapons” ban that would be based on buybacks with criminal charges for those who did not comply. A similar buyback was used by the Australia government.