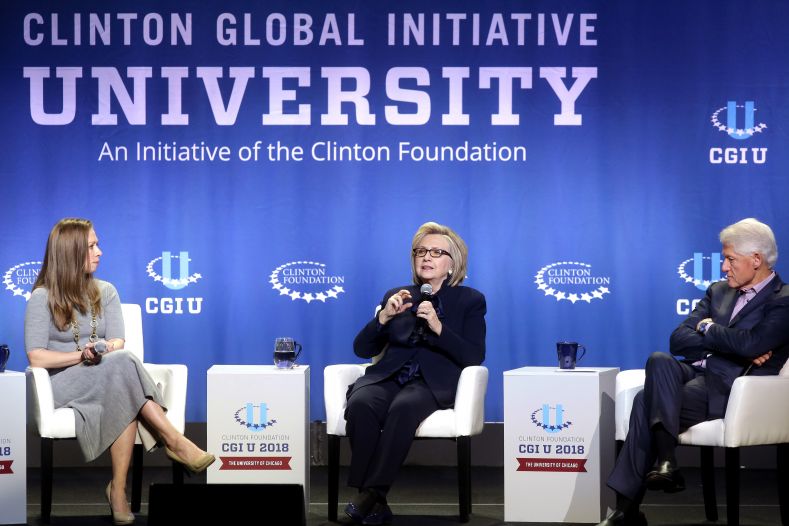 Matthew Whitaker, the acting attorney general of the United States and a former U.S. attorney for the Southern District of Iowa, said in a 2016 interview that there is enough evidence “in the public domain” to warrant the appointment of a “special prosecutor” to investigate the Clinton Foundation. He added that the Foundation was “clearly a pay-to-play situation” where if you gave money to the Foundation, you got “preferential treatment” at the State Department, which was headed by Secretary of State Hillary Clinton from 2009 to 2013.

Hillary Clinton’s emailing of classified documents through her private computer server was a “serious” problem, but the “real ballgame” is “where Clinton Foundation donors were given preferential treatment,” said Whitaker in an Aug. 25, 2016 interview with Breitbart News Daily.

“It’s very interesting to watch the Clinton camp try to explain away these meetings,” said Whitaker. “Fifty percent of the meetings she took with people that were not essentially employees or representatives of countries or the like, just sort of individuals that wanted to meet with the Secretary of State, 50 percent of those – as the AP has reported, more than 50 percent – were Clinton Foundation donors.”

“It is not possible for them to explain away that Clinton Foundation donors were given preferential treatment when it came to seeing the Secretary of State,” he said.

Whitaker further said that the demise of the FBI’s investigation into Clinton’s illicit use of a private email server is “one of the reasons that a special counsel is required.”

“We need somebody that is independent to look at these facts,” he said. “I was concerned when I heard that the Attorney General [Loretta Lynch in 2016] and the politicals at the Department of Justice had determined not to open an investigation into what is clearly a pay-to-play situation where, if you gave money to the Clinton Foundation, you got preferential treatment, if you had business from the State Department.”

“Based on what I’ve seen, that’s in the public domain currently, I think there’s enough to have a special prosecutor that can look into this, that can have the ability to subpoena documents and interview witnesses and do the kind of things and have the independence separate from this administration,” said Whitaker, the former chief of staff to former Attorney General Jeff Sessions.

“There is so much here, so much smoke, so many unanswered questions,” he said.

Towards the end of the interview, Whitaker said, “I’ve always thought the Clinton Foundation is a very sophisticated way to get around the campaign finance laws and to allow for unlimited donations and an ability to curry favor with a presidential candidate that, quite frankly, is unprecedented in the history of our country.”

Matthew Whitaker was named the acting attorney general of the United States on Nov. 7 by President Donald Trump. Between 2004 and 2009, Whitaker was the U.S. Attorney for the Southern District of Iowa. Whitaker is married and has three children.