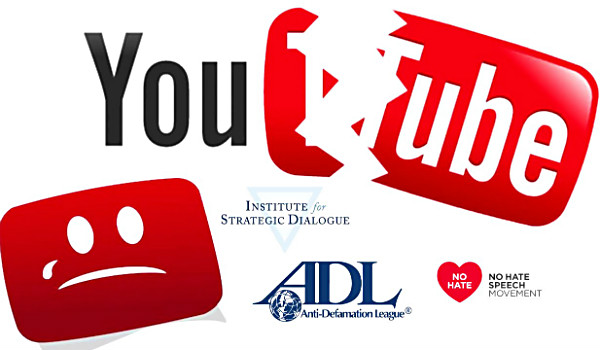 After blowback following The Great Purge (partial list), YouTube finally had to fess up that they are controlled by players with dubious agendas. Apparently they’ve noticed a flight to other channels that are lifting off as a result of the blatant censorship. The root of YouTube’s descent into Orwellian doublespeak stems from its stated policy. Furthermore, the vast majority of the groups in the flagger program hide in the shadows behind confidentiality agreements.

“We work with over 100 organizations as part of our Trusted Flagger program and we value the expertise these organizations bring to flagging content for review.” The partner groups “act as guides to YouTube’s content monitors.”

YouTube further admits that these so-called “trusted flaggers” are little more than algorithms. These in turn are developed by “engineers to police more efficiently.” This allows “mass flagging of content for review” by YouTube personnel.

Of late, this has been extended not just to content but to availing YouTube for simple viewing. I have noticed that when I view longer YouTube videos on Apple TV, they abruptly stop after about 15 minutes, and I need to go completely out of the YouTube platform, re-enter, go to my viewing history and restart the video. The story is that they track users who tend to utilize sites deemed “less trusted.”

Despite the fact that algos rule, YouTube has diverted blame to “newer members” of its 10,000-person cadre of content moderators for the virtual bloodbath of video takedowns, strikes and account restrictions taking place.

At the same time, Likudnik hardliner Naftali Bennett unveiled a new tool that he called a “supertanker,” or the “Antisemitism Cyber Monitoring System” to deal with anti-Semitism” around the world. As many sensible people have come to realize, the anti-Semitism epithet (like terrorism) can be and is extended and abused to include just about anything that doesn’t fit a tightly controlled narrative. Bennett threatened, “From now [on] we will know who the leading anti-Semites are, and they will be dealt with.”

In classic Orwellian double-think, Bennett informs us that “this system does not deal with critique of Israel, we are talking about anti-Semitism and sometimes that is under a cloak of anti-Israeliness.” Curiously, “The System” also found that following U.S. President Donald Trump’s recognition of Jerusalem as Israel’s capital, online anti-Semitism grew nine-fold compared to previous days. Whodathunk? The Supertanker will be made available to the 800-pound gorilla’s “partners.”

Would that include YouTube “partners” as well? One of those who admits involvement is the Jewish Anti-Defamation League (ADL). The ADL came on board in August of 2017, just as the YouTube content purges really got underway. Although “conservatives” get the press as targets, of late the hardest hit channels are those interested in conspiracy and discussing fake reality.

Here is what the ADL is rolling out- and this is not a parody.

Another “trusted flagger” is the SPLC, which has been subjected to severe criticism by more traditional conservative groups that consider it a group of “liberal hacks.” The National Review wrote that the SPLC is “in essence a machine for turning leftist hysteria into cash” and that it “portrays itself as a non-partisan, fact-finding group and has long been treated as such by media institutions such as the Washington Post and the New York Times.”

Is the SPLC just a “liberal hack”? Is that even fair to the many fine liberals and sane progressives in the land? It is astonishing how frequently decent people in the political spectrum get caught up in this false dialectic line of fire. This is what happens when the Jewish taboo and 800-pound gorilla in the room is not addressed. Who runs the SPLC?