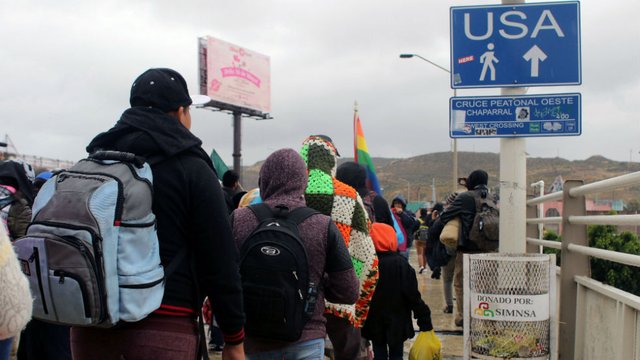 In particular, Limbaugh talked about what it would take for hundreds and thousands of people to make such a long journey on foot, and through a number of countries after the caravan originated in Honduras.

And if you look at pictures of the migrants you’ll see, many are carrying very small backpacks, so they can’t have much food with them, let alone toiletry items, tents/shelter, and extra clothing – all of the things you’d normally associate with someone trekking cross-country and hundreds of miles. Some don’t have a backpack at all.

That led Limbaugh to logically conclude someone – or some organization(s) – must be helping the migrants, to include the governments of Honduras, Guatemala, and Mexico, all countries they have passed through or will be passing through.

Almost on cue, Rep. Matt Gaetz, R-Fla., dropped a bombshell Wednesday, the same day Limbaugh was speculating about who was providing the migrant caravan’s basic needs. He tweeted out a video that showed men handing out what appears to be money to women and children in the caravan:

NGOs – non-governmental organizations – are almost all led by Left-wing individuals and groups. And George Soros is long known for his Marxist-socialist meddling in the U.S. electoral or governing processes. If, in fact, he – directly or indirectly – is funneling money to this caravan, then he most definitely needs to be (finally) held to account, perhaps by freezing his U.S. assets and using them to pay the costs incurred by the United States for dealing with all of these people once they arrive on our doorstep (and they will).

There has been some pushback on the original story – Gaetz himself corrected the record and said the people in the video are actually in Guatemala (he said he believed it was Honduras because he was sent the video by a Honduran government official). Some say that what we see in the video is not unusual, as it’s merely part of an annual “caravan” event meant to draw attention to the violence in their home countries.

But there is clearly more behind this latest caravan than just ‘tradition.’ For one thing, it was put together at a time – right before the midterm elections in the U.S. – when the American Democratic Left is desperate to make POTUS Trump and Republicans look bad. (Related: Feds cutting border security as migrant surge from Central, South America worsens.)

The establishment media no doubt has already taped interviews with many migrants including weeping mothers clinging to crying, dejected-looking children, all of whom are complaining that the evil Donald Trump and Republicans won’t let them into the land of opportunity (because they’re all racists).

In fact, they’re already starting to publish them.

But how likely is this stunt to change the outcome of the midterm elections? It may (or may not) inspire Leftists to show up and vote for Democrats, but it’s certainly going to energize more Republican, Trump-supporting voters, and there is already statistical data to back up that claim.

As The National Sentinel reports, immigration or, more specifically illegal immigration, is the No. 1 issue among GOP voters, with 25 percent saying so. That’s followed by “’Economy and Jobs’ (23 percent), then healthcare (17 percent), ‘gun policy’ (17 percent), and ‘tax cuts and reform’ (7 percent).”

In the meantime, it’s incumbent upon Congress and the administration to find out who’s funding this migrant invasion of our country.