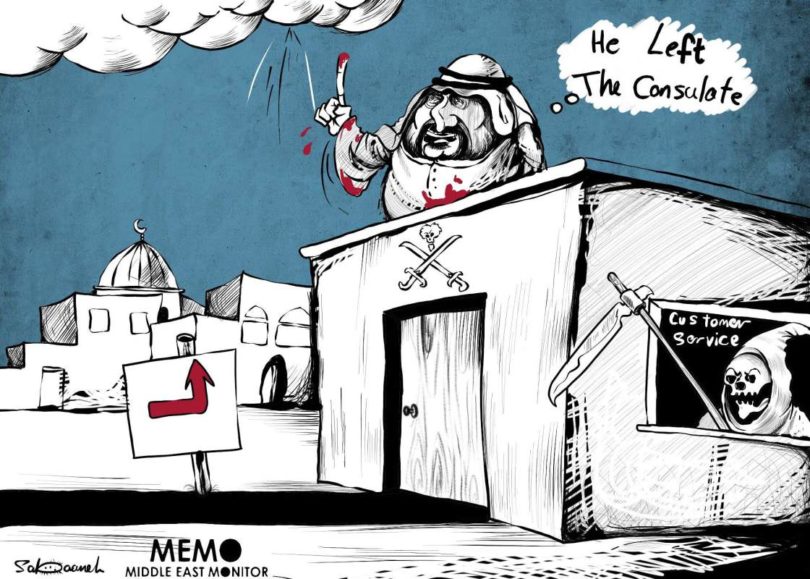 Maher Abdulaziz Mutrib hurriedly carried a big bag with him as he fled Ataturk airport on a private jet, sources tell MEE

Maher Abdulaziz Mutrib, an intelligence officer implicated in the killing of the Saudi journalist, is thought to have taken the body part out in a large bag, the sources said.

Mutrib, who is often seen travelling with the heir to the Saudi throne, left Istanbul on 2 October, the day of Khashoggi’s death, on a private jet that departed at 18:20 local time.

His bags were not checked as he passed through the VIP lounge at Ataturk airport and neither was the plane, with tail registration HZ-SK1. This was because the plane left before the alarm was raised. A second plane was searched from top to bottom and nothing was found, according to the sources.

Mutrib, who carried a diplomatic passport, appeared to be in a hurry, they said.

Turkish President Recep Tayyip Erdogan vowed on Sunday to reveal the “naked truth” over the killing of Khashoggi, saying that he would make a new statement on the case on Tuesday.

Erdogan held a phone call with US President Donald Trump on Sunday where the two leaders agreed the Khashoggi case needed to be clarified “in all its aspects,” a Turkish presidential source said.

Saudi Arabia, which on Friday finally admitted after 17 days that its officials had killed Khashoggi, says it does not know the body’s whereabouts.

Anonymous Saudi officials have told media that the body was rolled into a carpet and handed to a “local collaborator” to be disposed of.

However, on Sunday a Turkish source told MEE that Khashoggi’s body was cut into 15 pieces.

“They did not roll anything up in anything,” the source said.

Mutrib’s presence in the 15-man team sent by Riyadh to Istanbul to ambush Khashoggi in the Saudi consulate in Istanbul is increasingly under the spotlight as the kingdom attempts to insulate the crown prince from the scandal.

The Saudi heir, commonly known as MBS, has dismissed two of his closest and most-trusted lieutenants, deputy intelligence chief Ahmed al-Assiri and top aide Saoud al-Qahtani, in an attempt to address the growing international outcry.

Now, Turkish sources told MEE, the Saudis are looking to find ways of explaining why Mutrib was one of the 15 men implicated in Khashoggi’s killing.

“They are claiming that Assiri asked Qahtani for names of people who knew Khashoggi and could persuade him to come back, with Qahtani suggesting Mutrib because they worked together in London,” the source said.

“This does not hold any water. Mutrib was one of seven men taken from the crown prince’s personal security detail.”

Mutrib is one of seven members of MBS’s security and protection detail that were part of the 15-man team, MEE has previously revealed.

Turkish authorities are not satisfied with Riyadh’s explanation for Khashoggi’s death.

The Saudis say the prominent MBS critic was killed accidentally as a panicked fist-fight broke out in the consulate, and that those involved attempted to cover up the death.

Eighteen suspects have been arrested in Saudi Arabia, Riyadh said. Turkish authorities are seeking to have them extradited, but fear the suspects may be executed before that can happen.

Anonymous Saudi officials have told Western media outlets that one of the 15 donned Khashoggi’s clothes, glasses and Apple watch, and walked out the consulate’s back door in an attempt to appear as if the journalist had walked free.

Turkish sources close to the investigation say this did not happen. They said that the plan was discussed, but it was decided against before being carried out.

“The squad was not convinced that he looked the same as Khashoggi,” the source said.

Instead, the Saudis removed the hard drives of all CCTV cameras in the consulate.

Turkey says it has audio recordings of Khashoggi’s apparent murder from within the consulate. However, sources have told MEE that investigators now have other forms of evidence corroborating the audio, too.

Searching for the body

Turkish sources have told MEE that Khashoggi was tortured, murdered and dismemberedalmost immediately after entering the consulate.

He took seven minutes to die, the sources said, and his dismemberment began before he died from a lethal drug injection.

According to the sources, the sheer speed at which Tubaigy dismembered Khashoggi’s corpse displeased the rest of the team, who could not package the body parts fast enough.

Turkish authorities are determined to retrieve at least part of Khashoggi’s body.

For days, they have been scouring crime scenes such as the consulate and the residence of the consul-general, who has left the country.

By tracking the movements of a highly suspicious van, investigators have also been drawn to wooded areas on Istanbul’s outskirts, and to the town of Yalova, some 90km from the city.

MEE understands that the Turkish prosecutor-general has accrued enough evidence to charge each of the 15 suspects with murder.

However, he is waiting until the body, or parts of it, are found before issuing his report.