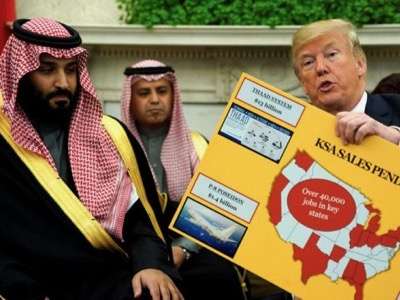 The Panamanians who remember Washington’s arrest of its employee, General Noriega, will not be surprised by the fate reserved for the Crown Prince of Saudi Arabia. The Jamal Khashoggi affair is one of MBS’s most insignificant crimes, but will probably be his last. The Saoud family is not protected by the Quincy Pact, which only applies to the King. The United States should recuperate several billion dollars.

The Khashoggi affair is one of the multiple examples of Western variable geometry ethics.

The Arabia of the Saoud family

For seventy years, we have been ignoring the facts, shouting : « Saudi Arabia is not a State like the others. It’s the private property of the King, and all the people that live there are no more than serfs. That is why it is described as the residence of it’s owners, the Saoud family, in other words, « Saudi » Arabia ».

In the 18th century, a tribe of Bedouins, the Saouds, allied themselves with a Wahhabite sect and rebelled against the Ottoman Empire. They managed to create a kingdom in Hedjaz, the region of the Arabian peninsula which includes the holy cities of Islam, Medina and Mecca. They were quickly put down by the Ottomans.
At the beginning of the 19th century, a survivor of the Saoud tribe raised a new rebellion. However, his family began fighting amongst themselves and lost again.
Finally, in the 20th century, the British allied with the Saoud family in order to overthrow the Ottoman Empire and exploit the hydrocarbon resources in the Arabian peninsula. With the help of Lawrence of Arabia, they founded the present kingdom, the tribe’s third.

The Foreign Office’s idea was that the Saouds and the Wahhabites should be hated by their serfs and incapable of maintaining good relations with their neighbours. Because of the disproportion of the military forces – between the Saoud’s sabres and the modern weaponry of the British – this family would never be able to turn on their Western masters. However, at the end of the Second World War, the United States seized the opportunity presented by the weakened British forces, and took their place. President Franklin Roosevelt concluded the Quincy Pact with the founder of kingdom. The United States pledged to protect the Saoud family in exchange for their hydrocarbons. Apart from that, the Saoud family would not oppose the creation of a Jewish State in Palestine. This document was renewed by President George W. Bush.

The founder of Wahhabism, Mohammed ben Abdelwahhab, considered that all those who did not join his sect should be exterminated. Many authors have pointed out the proximity of the Wahhabite way of life and that of certain Orthodox Jewish sects, as well as the resemblances between the reasoning of the Wahhabite theologians and that of certain Puritan Christian pastors. However, in order to maintain their influence over the Middle East, the British decided to fight the Arab nationalists and to support the Muslim Brotherhood and the Nashqbandis. That is why, in 1962, they asked the Saouds to create the Muslim World League, and in 1969, what we now call the Organisation of Islamic Cooperation. Wahhabism admitted Sunni Islam, which, until then, it had always contested. The Wahhabites then presented themselves as the protectors of Sunnism, but continued to oppose all other forms of Islam.

Anxious to avoid the fratricides which had marked the history of his family in the 19th century, Ibn Saoud instituted a system of succession between brothers. The founder of the kingdom had 32 wives who gave him 53 sons and 36 daughters. The oldest of the survivors, King Salman, is now 82. In order to save his kingdom, the Family Council decided in 2015 to put an end to this adelphic rule and designate the children of Prince Nayef and the new King Salman as future heirs to the throne. Finally, Mohammed Ben Salman ousted Nayef’s son and became the only Crown Prince of Saudi Arabia.

The morals of the Saoud family

In Antiquity, the word « Arab » defined the Aramean people who lived on the Syrian side of the Euphrates. In this sense, the Saouds are not Arabs. However, since the Coran was collated by the Caliph in Damascus, the word « Arab » today describes the people who speak the language of the Coran, in other words, the people of Hejaz. This generic term masks the very different civilisations of the desert Bedouins and the people of towns in a geographical area stretching from the Atlantic Ocean to the Persian Gulf.

Having evolved abruptly from the use of camels to the private jet, the Saoud family of the 21st century has conserved the archaic culture of the desert. For example, its hatred of History. It destroys any historical vestige in its country. It is with this mentality that we saw it working with the jihadists in Iraq and Syria. There is no other reason for the destruction of the house of Mahomet by the Saouds, or that of the Sumerian administrative tablets by Daesh.

Just as the Western powers used the Saouds to force the Ottomans to retreat – which no-one contests today – they used the jihadists, financed by the Saouds and supervised by the Wahhabites, to destroy Iraq and Syria.

This has been forgotten, but at the beginning of the aggression against Syria, when the Western Press was inventing the « Arab Spring », Saudi Arabia asked only for the departure of President Bachar el-Assad. Riyadh accepted that Syria keep its counsellors, its government, its army and its secret services, with which it had no quarrel at all. It only wanted Assad’s head because he is not a Sunni.

When Prince Mohamed Ben Salmane (alias d« MBS ») became the youngest Minister of Defence in the world, he demanded to exploit the oil fields of the « Empty Quarter », a zone which straddles his country and Yemen. Faced with Yemen’s refusal, he launched a war to cover himself in glory, like his grand-father. In reality, no-one has ever been able to successfully occupy Yemen, no more than Afghanistan. But whatever… the Crown Prince displayed his power by depriving 7 million people of food. And although all the members of the Security Council expressed their concern about the humanitarian crisis, none of them dared say anything about the valourous Prince MBS.

Advising his father, King Salman, MBS proposed to eliminate the head of the interior opposition, Cheikh Nimr Baqr al-Nimr [1]. The man was a peace-lover, it’s true, but from the Wahhabite point of view, he was an infidel, a Chiite. He was decapitated without causing an uproar in the West. Then MBS ordered the destruction of Moussawara and Chouweikat in the Qatif region. All Chiites ! Here too, the West failed to see the cities destroyed by tanks and the massacred serfs.

Since he stands for no contradiction, in June 2017, MBS pushed his father to break with Qatar, which had dared to take the side of Iran against Saudi Arabia. He called for all the Arab states to follow his lead and managed to force the Emirate to back off – temporarily.

When he entered the White House, President Trump made some allowances. He would leave the Yemenites to their agony on the condition that Riyadh stop supporting the jihadists.

That’s when President Trump’s advisor, Jared Kushner, had the idea of recuperating the oil money to replenish the US economy. The immense fortune of the Saoud family is nothing other than the money that the Western powers, in particular the United States, had automatically been paying them for their hydrocarbons. It is not the fruit of their work, but only a rent on their property. The young man therefore organised the Palace coup of November 2017 [2]. 1,300 members of the royal family were placed under house arrest, including the bastard son of the Fadh clan, Lebanese Prime Minister Saad Hariri. Some of them were hung by their feet and tortured. All of them were obliged to « offer » the Crown Prince half of their fortune. So « MBS », in his own name, raked in at least 800 billion in dollars and actions [3]. A fatal error !

The fortune of the Saouds, which until then had been shared between them all, was now concentrated in the hands of a man who was not the King, and therefore was not representative of the state. All that needed to be done was to twist the Prince’s arm in order to grab the loot.

MBS also threatened Kuwait with the same destiny as that of Yemen if it refused to offer him its frontier oil reserves. But time flies…

We only had to wait. On 2 October 2018, in violation of article 55 of the Vienna Convention concerning consular relations, MBS ordered the assassination of one of Prince al-Waleed Ben Talal’s henchmen at the Saudi consulate in Istanbul, the journalist Jamal Khashoggi [4].

Jamal Khashoggi was the grandson of the personal doctor of King Abdul Aziz. He was nephew of the arms dealer Adnan Khashoggi, who equipped the Saudi Air Force, and then, on behalf of the Pentagon, supplied Chiite Iran against Sunni Iraq. His aunt Samira Khashoggi is the mother of arms dealer Dodi Al-Fayed (eliminated with his companion, British Princess Lady Diana [5]).

Jamal had been associated with the Palace coup that old Prince al-Waleed was preparing against MBS. Mercenaries cut off his fingers and dismembered him before presenting his head to MBS, their master. The operation was carefully recorded by the Turkish and US secret services.

In Washington, the US Press and parliamentarians demanded that President Trump raise sanctions against Riyadh [6].

One of MBS’s advisors, Turki Al-Dakhil, replied that if the US were to sanction the kingdom, Saudi Arabia would be ready to destabilise the world order [7]. In the tradition of the desert Bedouins, all insults must be avenged whatever the cost.

According to Al-Dakhil, the kingdom was preparing some thirty measures, the most significant being to :

Reduce the production of oil to 7.5 million barrels per day, provoking a raise in prices of about 200 dollars per barrel. The kingdom would demand to be paid in other currencies than the dollar, which would bring about the end of US hegemony ;

Move away from Washington and move closer to Teheran ;

Buy arms from Russia and China. The kingdom would offer Russia a military base in Tabuk, in the North-East of the country, in other words, close to Syria, Israël, Lebanon and Iraq ;

Aware of the damage that this wild cannon could cause, the White House sounded the attack. Remembering a little late their uplifting speech about « Human Rights », the Western powers declared en chœur that they would no longer stand for this medieval tyrant [8]. One by one, all of their economic leaders obeyed the instructions from Washington and cancelled their participation in the Riyadh Forum. In order to calm their anger, and remembering that Khashoggi was a « US resident », President Trump and his advisor, Kushner, mentioned the confiscation of his properties for the benefit of the United States.

In Tel-Aviv, panic reigned. MBS was Benjamin Netanyahu’s best partner [9], and had asked him to create a joint staff in Somaliland in order to crush the Yemenites. He also made a secret visit to Israël at the end of 2017. The US ex-ambassador in Tel-Aviv, Daniel B. Shapiro, warned his Israëli coreligionists that with an ally like that, Netanyahu is putting the country in danger [10].

The Quincy Pact only protects the King, not the pretenders to his throne.