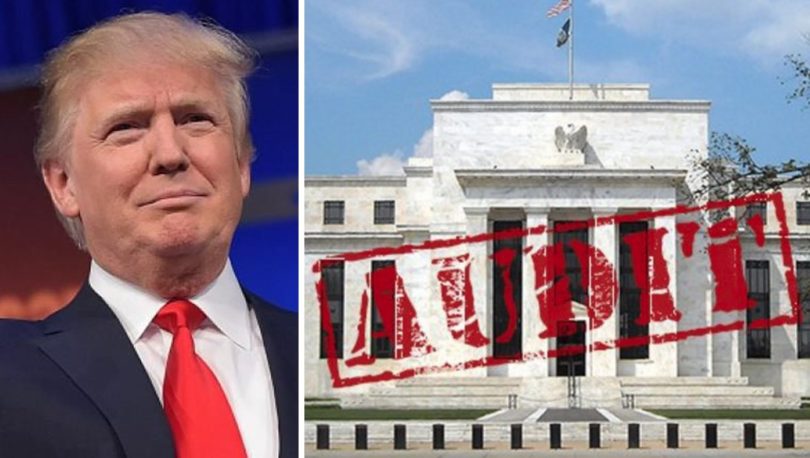 When it comes to politics, we are living in historic times. For the first time in a very very long time, a United States president that does not work as a puppet for the cabal, the corporations, and the financial elite is in the White House. That is not to say he doesn’t and hasn’t roamed in these circles, but things are clearly different. It seems that if you do not bash Trump, as we see the mainstream media constantly doing, you’re his supporter. This is not true, and it’s important to remember that we can view politics and what’s happening right now from an objective perspective. You don’t have to get caught up in the hate, the finger pointing, and all of the negativity; you can simply step back, watch, and be neutral.

It’s almost best to completely ignore anything that’s presented by mainstream media and do your own research and investigations. It’s best to focus on identifiable sources instead of a person on T.V. saying “CNN has obtained documents” or “CBC has learned.” It’s time to demand sources and proof for information, connect the dots and start opening our eyes. This is what many independent media outlets who are now being silenced have been doing for nearly a decade. Mainstream media outlets are hard for people to trust these days, which is probably highlighted by their connection to intelligence agencies and corporations, who influence their rhetoric.

Why Trump Is Demonized

I will say that it makes absolutely no sense at all, to me, how Hillary Clinton was even an option for POTUS. She was a puppet for the financial elite, and possibly involved in some terrible, unspeakable, crimes against humanity including against children. It’s very important to recognize why Trump is so vociferously demonized. It has nothing to do with the fact that people (because of mainstream media brainwashing) believe he is sexist, or racist, a liar, a narcissist etc. Granted, he makes it easy for them to do so, but again, we must understand why Trump is demonized instead of simply allowing our minds, thoughts and perceptions about what is happening here to be programmed.

Related CE article about the recent bombs that were sent to Clinton, Obama, and others.

The ‘American Empire’ has also clamped down on what they call ‘Fake News’–which is often simply information that prevents the global elite from carrying out their agenda. It’s no surprise that hundreds of independent media outlets have been deleted from social media prior to the 2020 election. You can read more about that here.

The ONLY reason trump has been demonized for so long, is because he is a disruptor of the establishment. He is not part of the same ‘clique’ that the Clintons, Bushes and Obamas belong to. This is quite clear for anybody who has done any research into geopolitics. The only difference is the way these people are portrayed. In many cases, those who are praised by the corporations and financial elite, become saviours in the eyes of the collective. Obama was a great example, being the first black president, and Hillary was another, with potentially being the first female president. These people hide behind the veil of good will, while their actions seem to dictate otherwise.

Trumps’ disruption goes against two key pillars of the American ruling elite, neoliberalism and neoconservatism. He is also straight up, and to the extent where he can say what he feels honestly, which is also something we haven’t seen in politics for a long time. Usually, it’s simply puppets following the will of their masters: interference in the political process of other countries and an uninterrupted path towards ‘globalization,’ serving only their own selfish motives. What New York City Mayor John F. Hylan said nearly 100 years ago is even truer today:

The real menace of our Republic is the invisible government, which like a giant octopus sprawls its slimy legs over our cities, states and nation . . .  The little coterie of powerful international bankers virtually run the United States government for their own selfish purposes. They practically control both parties . . .  [and] control the majority of the newspapers and magazines in this country. (source)(source)

Historian Richard Dolan comments on the ultimate motive behind the media attacks on Donald Trump:

“It reminded me very much of the concerted media attack against Brazil’s Dilma Rousseff which culminated earlier in 2016 in her impeachment and removal from power. In the case of Rousseff, we see what has been alternately described as a soft coup or a Wall Street coup, rather along the lines of the “color revolutions” of a few years earlier (which are now largely understood as CIA-NGO orchestrated). In both cases, pretexts were created and hammered home by an insistent media that whipped up public opinion. In Brazil, it worked. It seemed like it would work in the U.S.”

Our Role In This

The amount of anger, emotions and frustration we collectively have had about Trump being president is incredible. While I believe this shows how much we collectively need to shift our perspectives on things in general, I also believe that in many ways our emotional outcries are where things start. We have to observe our emotions and what they telling us about our beliefs and perspectives in order to see how we can move beyond them.

Is Trump also an insider? Sure, but he’s clearly on a different team, and at the end of the day, it doesn’t matter. The president is not going to change the world, we are.

“Political parties exist to secure responsible government and to execute the will of the people. From these great staffs, both of the old parties have ganged aside. Instead of instruments to promote the general welfare they have become the tools of corrupt interests which use them in martialling [sic] to serve their selfish purposes. Behind the ostensible government sits enthroned an invisible government owing no allegiance and acknowledging no responsibility to the people. To destroy this invisible government, to befoul the unholy alliance between corrupt business and corrupt politics is the first task of the statesmanship of the day.” – Theodore Roosevelt

Any president who takes on the task described by Roosevelt, will be ridiculed, demonized, impeached etc, unless they have a tremendous amount of support from those “within” who may be able to yield some influence.

The Federal Reserve, “the Fed”, is the central bank of the United States of America that was created in 1913 by Congress. It is a banking cartel that has a government-granted monopoly on the creation of money and credit. The Fed literally loans “money” (Federal Reserve Notes) into existence. Federal Reserve Notes are paper promises backed by nothing of intrinsic value and they are only functioning as money because the government forces them on the public through legal tender laws.  Federal Reserve Notes are referred to as dollars but are not.  The definition of a dollar is a weight of silver (371 grains). To put it simply, the Fed is a group of banks running a national counterfeiting operation with the protection of the government.

This characterization, it would seem, has been growing into the public awareness more and more since G. Edward Griffin’s ‘The Creature From Jekyll Island’ became widely known. Since then, former congressman Ron Paul has talked about the need to abolish the Federal Reserve in public speeches and in his book ‘End the Fed.’ He characterizes the Federal Reserve as both corrupt and unconstitutional. So why hasn’t it happened?

Well, first of all the Federal Reserve is an independent agency, and that means basically that there is no other agency of government that can overrule actions that we take. (source)

Trump used the nature of this relationship to publicly call out the actions of the Fed rather than meeting privately to discuss policy, according to CBS news. Trump said he doesn’t speak with the Chairman of the Fed, Jerome Powell, because of the Fed’s ‘political independence’. That has allowed him to let it be known to the general public that, “I’m not happy with what he’s doing because it’s going too fast.” He’s referring to raising interesting rates, according to the New York Post, Trump stated, “Every time we do something great, he raises the interest rates.”

When it comes to economics, unemployment etc, Trump is succeeding where practically every other president has failed. Given what we know about the Deep State, and the fact that they clearly do not favor him and want him out of there, they are going to do everything in their power to derail his presidency. This has been a common theme throughout. According to Trump, the Federal Reserve “has gone crazy” and is out of control.

The Swindle of Central Banking

In Canada, a young 12-year old girl named Victoria Grant observed that the Bank of Canada operates in much the same way as the Federal Reserve in that the government–meaning the public taxpayer–has to pay interest on all money put into circulation.

Allow me to explain how our private banks and government work today: first the Canadian government borrows money from the Private Banks. They then lend the debt based money to Canada, with compounded interest. The government then continues to increase taxation of Canadians, year after year, in order to pay back the interest on the exponentially growing national debt. What results is inflation, less real money for Canadians to spend into our economy, and the real money being used to pad the pockets of the banks.

The passage comes from the following must-watch video, where Victoria elucidates clearly and succinctly the problem we faced in Canada in 2012, reflective of ALL Central-Bank controlled nations. You can watch that here. And below is a clip from the Thrive documentary discussing the topic.

The Trump presidency has called out the Deep State, and during his election, it was the first time mainstream media began talking about a shadow government and deep state, referring to unelected individuals who ACTUALLY run the country, not the people you vote for. This shadow government has historically been referenced by countless political figures.

If we keep putting our future in the hands of others, nothing is ever going to change. At the end of the day, what is happening in politics right now is simply another opportunity for us to see what’s really going on. If you demonize Trump without recognizing the forces that have controlled virtually all other presidents before him, then you are unknowingly contributing to crimes against humanity. Although we do not support Donald Trump as such, we do recognize that there is a difference between his role here and that of other prominent political figures.

Trump may have many faults as a person, but the evidence seems to be showing that he is not working to hide the truth as his predecessors did. In that regard, he is aligned with the shift in consciousness that’s happening on the plant right now.