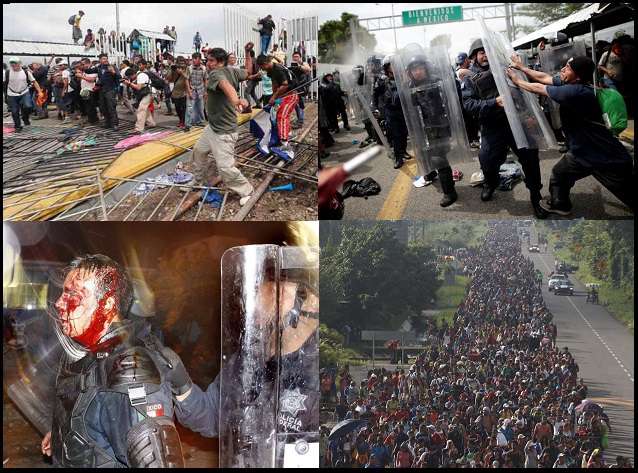 Let’s be real: massive migrant caravans don’t just happen naturally; they’re engineered by clandestine manipulators operating way behind the scenes.  And with LOTs of cash to pay off the border crashers as well as the border officials.

The entire push to crash the USA’s Mexican border has been stealthily engineered by George Soros & Company.  The “Company” refers to the Rothschild international banking cartel which is essentially a tyrannical global crime syndicate.

This shadowy cabal of banskters and warmongers profits handsomely from war and chaos.  In fact, disaster capitalism provides them with one of their largest revenue streams over many decades across the planet.  Because they own and operate the major military powers that constitute the Anglo-American Axis, it’s quite easy for them to run an integrated monopoly that trades in war and mayhem throughout the planetary realm.  And so they do.

The Soros-funded NGOs across America have been working overtime to steal the midterm elections.  They have organized in ways that will never be known to rig the election by any means necessary to flip both the House and the Senate, as well as to turn as many state and municipal governments as blue as possible.

The single best way to achieve these electoral goals is to flood the U.S. with illegal aliens who can then be set up to vote Democrat.  When leftist Soros-run NGOs have guaranteed your illegal entry into the country, you are indebted to the Democrats practically forever.  The payment of that debt is illegally voting straight Democrat for the rest of your unlawful squatting in the country.

Make no mistake, this Blue Wave from Central and South America is a LOT larger than we are being told by the mainstream media (MSM).  In reality, it’s a massive BLUE tsunami generated to compensate for the RED tsunami that is headed to the polls on November 6th.

It’s entirely true: the Democrat Party is in such a state of collapse nationwide that the DNC made a command decision to turn the tide by triggering a 2018 election tidal wave of illegal aliens.  They know they had no other way to win elections except to flood the voting booths with illegal aliens in sanctuary cities and sanctuary states across the country.  This is their Plan A, B and C.

The preceding photo captures just one small blue wave this month.  There are actually many more rolling across Mexico, most of them completely unreported.

The ongoing “HONDURAN INVASION” is being given a lot of press as a way of triggering all the other blue waves south of the border to begin their trek northward.  Isn’t this Soros-directed scheme obvious with Mexico permitting their own border to be crashed (Rothschild banksters have obviously paid off all the Mexican corruptocrats).  By the way, since when does a nation not exert complete control over their border WHENEVER THEY REALLY WANT TO.

For the uninitiated, this globalist operation — Blue Wave 2018 — represents a central pillar of their New World Order agenda designed to irreparably tear the social fabric of America.  Only in this way can the perps create the social chaos and political pandemonium necessary to foist a communist government on the USA.  Each of these illegal aliens is a future political bolshevik or violent anarchist or communist agitator or socialist provocateur willing to break the law and carry out barbaric acts of bloodshed.

What follows is a photo of type of the Honduran folks who are on their way to crashing the U.S. border.  Now, really, just how much do these people say they love America?!?!

This election cycle will prove to be the most disruptive in the nation’s history.  From now until the first of the year will see a nation in great turmoil, as it should be.

There’s so much at stake for both sides that neither will accept a loss… … … and both will do whatever it takes to seal the necessary victories.

Trump is already being majorly pre-empted by the CIA’s Mockingbird Media so that his administration will not question the outcomes or integrity of the election process.  The following unfounded MSM report put it out there in such a brazen and presumptuous manner that it only reveals more of the extreme desperation of the Left.

One thing is for certain and that is that Something Wicked This Way Comes…Between Now And Election Day.

The Democrats have become such a failed political enterprise because of their utter lawlessness, moral bankruptcy and deliberate incitement of social chaos that they have chosen an extreme path toward an elusive victory.  And, they really don’t care how they’re perceived anymore because they know that a big loss at the polls means the end of their seditious communist agenda and naked cultural marxist strategies.  It may also mean the effective end of their Democrat party.

As we quickly approach the final stretch of this campaign season, the body politic can expect much more manufactured mayhem and divisive disorder.  These violent tactics form the very backbone Cultural Marxism.  When political bolsheviks don’t get what they want peacefully, they will always attempt to acquire it forcefully.  That’s just what they do. See: Soros and the Left will attempt to violently take over America if they don’t win the midterms

Therefore, it’s imperative that patriots everywhere stay vigilant.  Truly, the best way to ensure a post-election period of law and order is to pray like never before.  Because the United States of America needs prayer like never before.

Source State of the Nation