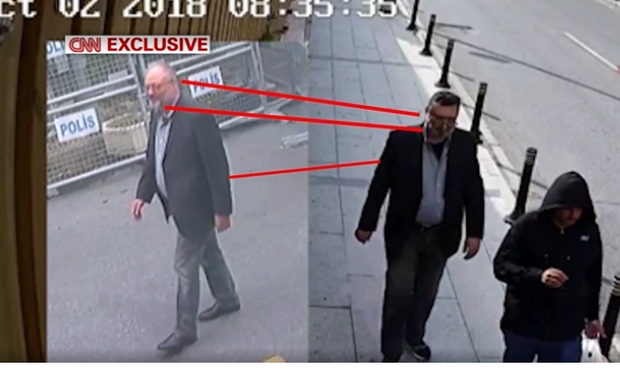 Videos have emerged of a Saudi suspected of being behind Jamal Khashoggi’s murder walking around Istanbul in the journalist’s clothes shortly after he was last seen – while footage released on Monday evening purportedly showed staff at the Saudi consulate in Istanbul burning documents the day after the Saudi journalist’s death.

In footage released by CNN, Mustafa al-Madani, one of 15 Saudis who is believed to have travelled to Istanbul from Riyadh with the intention of killing critic Khashoggi, is seen wearing the journalist’s shirt, trousers, jacket and glasses.

He also appears to be wearing a fake beard and his own shoes.

Madani, along with an accomplice, is seen walking to the central Sultan Ahmed Mosque, commonly known as the Blue Mosque, which he disappears into for a short amount of time.

Soon after, Madani reappears wearing the same clothes that he was wearing when cameras captured him entering the consulate at 11:03am, two hours before Khashoggi arrived.

The footage then shows Madani and the accomplice laughing and relaxed as they make their way back to the consulate.

On the way, they dumped a plastic bag, likely containing Khashoggi’s clothes, in a rubbish bin.

A source close to the Turkish investigation told Middle East Eye that once the two men returned, the Saudi hit squad reviewed footage of the imposter on the consulate’s own CCTV cameras.

According to the source, it was decided that the two men did not look sufficiently alike, and so the conspirators decided to wipe clean the consulate’s CCTV footage.

The source said dressing Madani up as Khashoggi and claiming he left the building was a plan hatched before Khashoggi’s death, and shows that his killing was premeditated.

Meanwhile, Turkish television channel A Haber released on Monday evening a video – seemingly filmed by a small drone – which it said showed Saudi consulate employees tossing documents into a fire outside of the consulate building on 3 October, the day after Khashoggi was murdered.

Turkish authorities have yet to officially comment on the latest video, which was shared by a number of Turkish news outlets. The identity of the individuals in the video, as well as the content of the documents they burned, remained unknown as of publication time.

The five employees join 20 others already interviewed last week. Investigators are seeking to take statements from all 45 consulate workers within the coming days.

Turkish President Recep Tayyip Erdogan announced over the weekend that he will reveal the “naked truth” behind Khashoggi’s killing on Tuesday.

His statement to a parliamentary committee will coincide with the opening of a major investment conference in Riyadh that has seen several world and business leaders pull out as the scandal around Khashoggi’s death grows.

Saudi Arabia has sought to check the fallout by arresting 18 people suspected of killing Khashoggi, dismissing two top officials and claiming the journalist and government critic died accidentally after being put in a chokehold.

However on Sunday, Saudi Foreign Minister Adel al-Jubeir further muddied the waters by saying that in fact the kingdom didn’t know how the Washington Post columnist died.

Jubeir added that the Saudi government did not know the whereabouts of Khashoggi’s body.

Sources have told MEE that Khashoggi was tortured, murdered and dismembered by a hit squad of 15 Saudis sent to Istanbul to kill him.

Focus on the body

The location of Khashoggi’s remains has become a key part of the Turkish investigation.

Anonymous Saudi officials have told Western media outlets in recent days that Khashoggi’s corpse was rolled into a carpet and handed to a “local collaborator” to dispose of.

This account has been denied by a Turkish source close to the investigation, who told MEE that Khashoggi was cut into 15 pieces by Saudi forensic pathologist Salah Muhammad al-Tubaigy.

According to the Turkish source, there was no carpet involved.

“They did not roll anything up in anything,” the source said.

Investigations have now led Turkish authorities to believe that part of Kahshoggi’s body was carried out of Turkey by one of Saudi Crown Prince Mohammed bin Salman’s bodyguards.

As he travelled using a diplomatic passport, the intelligence officer’s large black bag was not checked by security. Neither was the plane, which departed at 18:20.

A second jet, with registration HZ-SK2, carried another batch of the 15 suspects, but was searched as by then the alarm had been raised that they might be behind Khashoggi’s disappearance.

MEE understands that the Turkish prosecutor-general has accrued enough evidence to charge all 15 Saudi suspects with murder, but is waiting until some or all of Khashoggi’s body has been recovered to issue a final report.

Turkish investiagtors have for days been scouring the consulate, the consul-general’s house and woodland areas on the city’s outskirts for Khashoggi’s remains. The probe has also taken them to the town of Yalova, some 90km from Istanbul.

So far, the search for Khashoggi’s corpse has been fruitless.

Despite Riyadh’s admission that its operatives were at fault for Khashoggi’s death, and statements of remorse from members of its leadership, international outcry over the apparent murder is growing.

Over the weekend, German Chancellor Angela Merkel said her country would suspend arms sales to the kingdom.

“First, we condemn this act in the strongest terms,” the German leader said.

“Second, there is an urgent need to clarify what happened – we are far from this having been cleared up and those responsible held to account … As far as arms exports are concerned, those can’t take place in the current circumstances.”

And on Monday, the German economy minister called on all European countries to do the same.