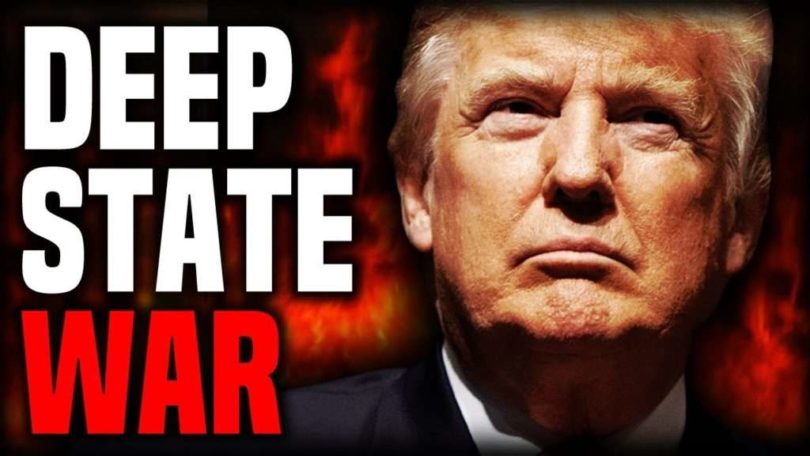 “These bomb scares are a total joke.  No one even knows if they took place.  If they did, the Democrat perps likely sent them to each other.  Even “Mad Maxine” Waters says ‘I Ain’t Scared’.  Why should she be, she knows exactly who sent them and what the real purpose of this Deep State hoax is.  How is it that so many closet communist leaders of this ongoing Soros-sponsored revolution received a bomb and yet none of them detonated?  All that needs to be taken VERY seriously about this extremely brazen and remarkably reckless psyop is that the “Very Deep State” criminals were desperate enough to do it!”

The central pillar of Deep State has ALWAYS been the mainstream media (MSM), sometimes known as the CIA’s Mockingbird Media.

In point of fact, without the major MSM organs of propaganda operating at full tilt all the time, the Deep State’s flow of necessary disinformation, misinformation and false information would cease thereby paralyzing the Shadow Government.

Because of this stark reality, the whole world is now witnessing unprecedented panic being acted out by the “Very Deep State”.

Trump vs. the “Very Deep State”

The very day that President Trump began exposing the MSM with their own ridiculous “fake news”, he became a marked man.  No world leader in history has ever used their high and mighty platform to tell the truth about the pervasive and profound untrustworthiness of the corporate media.

Because of this rapidly unfolding reality, the “Very Deep State” has made it their top priority and main mission to neutralize Trump.  However, they are limited in their options, the reasons of which are way beyond the scope of this short article.

The crucial point is that there is an EPIC WAR raging across planet Earth the likes of which has never been seen before.  Trump is merely the spearhead of one side of this war that is determined to completely destroy the corporate media, as it should be.  There will never be peace as long as the MSM magnates works for the Deep State … who answer to the “Very Deep State” … who report to the Shadow Government … who are paid by the Rothschild international banking cartel … who follow the dictates of the Black Nobility… who obey their Illuminati masters ….

With this knowledge of how the Global Control Matrix is roughly structured, it ought to be easy to see why the “Very Deep State” is in a sheer panic.  Simply put, with their primary control mechanism — the Mockingbird Media — totally exposed as the CIA’s nonstop propaganda factory, the entire Global Control Matrix will collapse in a day and a night.  And so it is!

Because The Powers That Be cannot take out Trump, they are using the Left to take down the Right.

Rather than eliminate one man who leads the Patriot Movement, the globalists realized they had to eradicate the entire movement.  There are simply too many American nationalists who are intractable impediments to their New World Order agenda.  Hence, what better way to destroy the Patriot Movement (that religiously follows the Alt Media) than to pit them against the liberal Democrats who drink MSM kool-aid 24/7.

These bomb scares were quite purposefully directed at all the primary VIPs on the Left.  How convenient was it that each and every one of the bomb recipients has a HUGE and IMPASSIONED fan base.  This is how the controllers intend to galvanize the Left into a surreptitious civil war of sorts, where they take the cities and the Right takes the rural areas.  That’s already happening by stealth as we see in sanctuary cities in many of the 50 states.

These false flag bomb scares were the perfect vehicle for the perps to use to engender massive amounts of fear that will certainly work in favor of Soros & Company, but will deeply alienate patriots everywhere.   This classic “divide and conquer” strategy always works like a charm when attempting to disempower the body politic.  This is why they stooped to sending the fake bombs to themselves; it’s impossible for anyone to say they were never sent.

Here’s the real deal about this bomb scare conspiracy.  Once Trump started the campaign to expose the press, the media magnates knew their brands would take a humongous hit.  After all, who has not read about CNN being the Communist News Network…or the Clinton News Network…or Certainly Not News.  So, the numerous MSM talking heads conjured up a narrative — in unison — about how someone was going to get hurt real bad.  They have trumpeted that tall tale for many months now methodically setting the stage for what we are seeing today.

Remember the false flag mass shooting that the same perps carried out in Maryland in late June of this year.  That Gladio-style attack was also designed to support the Left’s evolving plot to frame Trump as the political impetus behind these tragic massacres (those that really occurred, that is).  See: ANNAPOLIS NEWSPAPER MASSACRE: Another Gladio-style False Flag Terrorist Attack

As long as Trump justifiably criticizes the media for publishing so much fake news and so many false reports about EVERYTHING, ALL THE TIME, he will be held up high by the MSM as the primordial cause of all future violence.  This is the scheme: to sufficiently turn the American people against the POTUS.  And, to flip as many on the Right and in the middle as possible to provide the number of warm bodies needed to win a full-scale ‘revolution’.

What is quite different about these obvious false flag bomb scares is that the entire Right knows that the bombs were staged to further rig the midterm elections.  The “Very Deep State” decision-makers pushed the button on this seditious conspiracy quite deliberately just two weeks before Election Day.  They know that such a fictitious assault on their globalist-loving Democrat leaders will inflame the passions of the Left in an effective way.  However, whenever there is the potential for great rewards, there are also great risks involved.

Just like every stupid stunt the loony Left tries to pull off, they always backfire with awesome effect.  This spate of bomb scares has also implicated many MSM titans because of how they immediately took advantage of the chaos by falsely and prematurely accusing Trump and his supporters for their own perfidious acts of treason.

“According to Laurence Tribe, “Every single alleged recipient of the bomb packages — Soros, Obama, Clinton, Brennan, Waters, Booker, Clapper, Wasserman-Schultz, Holder, CNN — has been a target of Trump”.  And, yet, not a single one exploded.  Now that sounds like a C.I.A. false flag bomb scare.  What better way is there to change the topic away from the Deep State-contrived caravan and drum up immediate sympathy for George Soros—the real villain behind the Honduran invasion.  This is exactly the type of black op they do right before the most consequential midterm election in U.S. history.”
(Source: Desperate Deep State Democrats Orchestrate False Flag Bomb Scares Against Liberal Leaders As Midterm Election Ploy)

As always, this bomb scare psyop is also about distracting the electorate from so many Democrat scandals right before the big day—November 6th.

The DEMs have so many scandals to contend with it’s dizzying.  It’s now impossible for them to manage these criminal conspiracies with any degree of success so their Plan B is to forever distract with yet another dramatic false flag operation.  Really, you can’t make this stuff up it’s so friggin’ over the top.   That’s because the entire Democrat Party is suffering from a collective madness that very few really comprehend.

When in doubt, the Leftist leaders will always go to their fallback plan of manufacturing diversion galore, as well as misdirect whenever it works to radically change the public discourse.  These are corrupt progressive attorneys, by and large, so they are well-trained to do this over the course of their criminal careers.

To be sure, the Democrats have a dire need to distract, divert and misdirect from now until their November day of reckoning.

These bomb scares are such naked hoaxes that TPTB have had to enlist the aid of politicians to even convince us that they were real (See graphic above).  When has that ever happened before?!

Of course, there’s much more to this picture than meets the eye as explained in this  extraordinary exposé: FALSE FLAG BOMB SCARES: Who’s doing it and Why?

That the liberals have resorted to bombing each other is a glowing testament to the success that Trump has had in knocking down the primary pillar of Deep State— the ever-prevaricating and profoundly treacherous MSM.

Truly, THE MAINSTREAM MEDIA IS THE ENEMY OF THE PEOPLE!

Therefore, The Mainstream Media Must Be Shut Down And/Or Taken Over Post Haste.

Now we are told that a Trump-loving suspect has been arrested for sending these bombs.  Not only that but he just happens to have a perfectly sculpted conservative profile who matches a far-right persona with an ax to grind.  His van has so much RED signage that one might think his was a mobile advertisement for the Republican Party.  These mind-controlled patsies are forever trotted out by the Deep State post crime spree and presented in a manner that they are a lone wolf, but they rarely are.

This purposefully timed black operation was a sophisticated plot to damage the Right with threatened violence that the Left is usually guilty of.  Remember, if the MSM reports it, it isn’t true.  Which is why we firmly believe the apprehended Floridian was set up as a patsy by the real perps