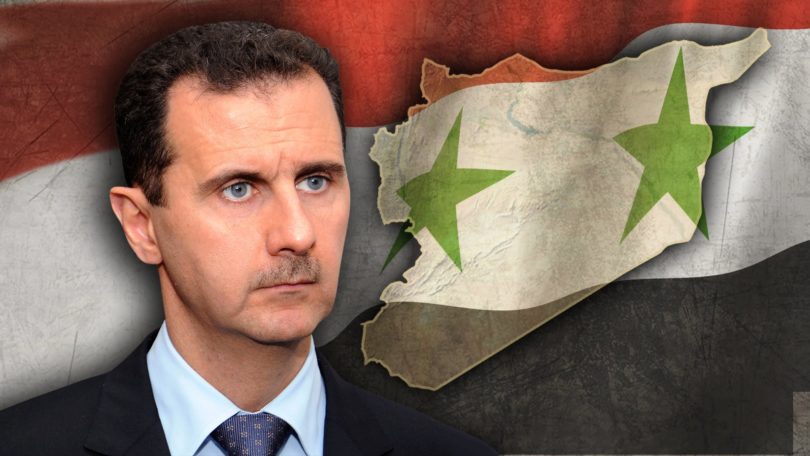 Here’s some news you may not have expected to read today.

The New Yorker, citing unnamed US and EU officials, claims that the White House will accept Assad as Syria’s president until the next elections in Syria in 2021:

Donald Trump’s administration is prepared to accept the continuation of Syrian President Bashar Assad’s rule until the country’s next presidential election, set for 2021, The New Yorker newspaper reported, citing unnamed US and EU officials, explaining that depending on the results of the next US presidential election in 2020, he might still be in power, when the incumbent US president leaves office.

Imagine that! The US, in all its supposed omnipotence, is willing to ‘allow’ the democratically-elected President of a foreign nation to serve out his term. Maybe Assad should send a gift to the White House in recognition of the astonishing honor that Washington has afforded him.

This report is, however, in stark contrast to what other Trump Admin. officials have been saying very recently. Earlier this year, crazed war-hawk Nikki Haley said that “Assad has no place in Syria“, while Trump’s Secretary of State Rex Tillerson said “the reign of Assad is coming to an end“. Well, I guess not! It’s possible that part of Putin’s reasoning in pulling most of the Russian military out of Syria was appease the crazies in Washington and get them to accept Assad as the Syrian president for the foreseeable future.

It’s also worth nothing that Turkey’s Foreign Minister said today that Turkey “no longer sees Syria as a threat“. It wasn’t that long ago that Erdogan also declared that ‘Assad must go’. Relations between Syria and Turkey have clearly been significantly repaired largely due to the efforts of Russia and Putin. Russia has a lot of leverage and ‘sweeteners’ at its disposal when it comes to encouraging Middle Eastern states to see things Russia’s way. Yesterday, as a result of Putin’s short visit with Erdogan in Ankara, Erdogan announced that the deal to sell the Russian S-400 missile system to Turkey would be finalized this week. According to Interfax citing a Russian presidential source, Russia will offer Turkey partial financing for Ankara’s purchase of the systems. The sale of these top of the range systems will go a long way to making Erdogan feel more secure about Turkey’s position in the region, and that can only be good for regional stability.

With the help of Russia and Iran, Syria has almost completely eradicated the Western-created proxy army that was set loose in Syria over 6 years ago . How can anyone with any sense or integrity call Assad a “ruthless dictator” when it was his government and military that sacrificed so muchto eradicate terrorists who not only destroyed whole cities and slaughtered Syrian civilians, but also spread terror and killed hundreds of civilians in Europe! Far from a dictator, Assad, like Putin, is rightly seen as a savior by the Syrian people. Europeans and Americans should take a lesson.

The simple truth of the matter is that the actions and behavior of the US government were never motivated by a sincere belief that Assad was an “evil dictator”, but rather by American geopolitical interests in the Middle Eastern region, and the fact that Syria is a Russian ally. Those factors made it a target for “destabilization” by the USA as part of the greater geopolitical war that the US is waging in an effort to maintain its faltering global hegemony. The US’ criminal plot in Syria could very easily have worked too, had Putin not intervened in Sept. 2015, called the US warmongers’ bluff and gave them a lesson in what fighting terrorism really means.

At this point, there is a good chance that Assad will be re-elected in 3 years given the current high levels of popularity he enjoys as a result of his successful defense of the Syria people. Don’t forget, Assad was democratically elected president before Western powers launched their despicable black propaganda campaign and proxy war against him. The Western media and politicians loved to call him a “dictator” without offering any hard evidence to back up their scurrilous claims, much like they did with Gaddafi. All the while, they completely ignored the actual evidence that Assad enjoyed strong support among the Syria people throughout the entire war. Even at one of the lowest points in the war from Assad’s perspective in 2014, when ISIS was on the rise and the Syrian Arab Army was being hard pressed, Assad was reelected President in elections that were confirmed to be ‘free and fair’ even by US observers!

If the US wants to continue to oust democratically-elected leaders of foreign nations and destroy their countries, it would be nice if they could drop the pretense about ‘freedom and democracy’ and their flagrantly false concern for human rights and be honest about their intentions. At least then we could respect them for their honesty, if not their brutal ideology.