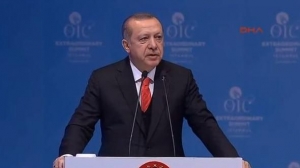 Turkish President Recep Tayyip Erdogan has called on all countries to recognize Jerusalem as the occupied capital of Palestine.Erdogan announced about this addressing the opening of the summit of the Organization of Islamic Cooperation (OIC) in Istanbul devoted to the issue of Jerusalem, an APA correspondent reported from Istanbul.“There is no need to say anything to Israel.

The truth is obvious. Israel was awarded for such terrorist acts as occupation, illegal settlement, the destruction of houses, the seizure of territories and property. And this award was given by Trump,” said the Turkish leader.

Nothing happens in the world in line with the principle “I did it, and I did it right”, noted Erdogan.

Erdogan said that he believes 196 UN member states will display a common response to the U.S. decision. “You [U.S.] can be strong, posse weapons and nuclear warheads. But it doesn’t mean that you are powerful. In this matter, you are not right,” he added.

The Turkish leader described such an action by the U.S. as a threat to humanity.

“It’s impossible to talk about lasting peace until this issue is resolved fairly. We cannot remain indifferent to this matter that affects everybody’s future. This also a heavy blow to our culture,” said Erdogan.

Erdogan said he believes this issue will be resolved by the joint efforts of people of all faiths.

“I urge all countries to recognize Jerusalem as the occupied capital of Palestine,” said the Turkish president, adding that Muslim countries would never give upon the sovereignty and independence of Palestine.

Erdogan strongly condemned the actions of Israeli soldiers against Palestinians, calling Jerusalem ‘a red line’ for the Muslim world.