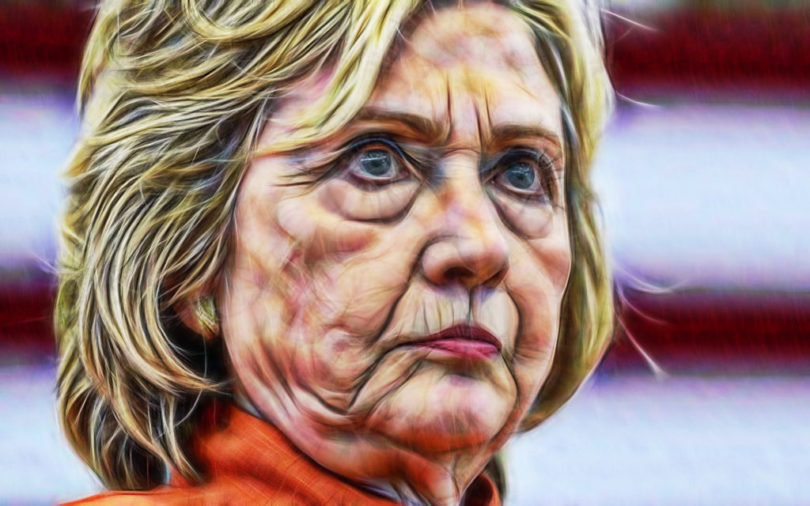 Reading about former U.S. Secretary of State Hillary Clinton in every digital morning newspaper each day, I cannot help but wonder. Has the world lost the capability to classify war criminals? Why is has this wretch not been dragged screaming and kicking in front a jury of peers? President Donald Trump – keep your promise sir. Rid the world of this wicked witch of the west.

When you read about Hillary Clinton being the cause of slavery being revived in Libya on USA Today, you know her exact crimes against humanity must be much, much worse. When the mainstream condemns the cheerleader of the U.S. backed liberal world order, the hidden truths behind the curtain must surely be biblical. But African men being sold at slave auctions in the North African state formerly run by the now deceased Moammar Gadhafi show Clinton’s role in humanity undone. ‘We came, we saw, he died,’ Clinton joked before a TV appearance when the Libyan leader fell. It was Clinton who helped Barack Obama fishtail on President George W. Bush’s 2003 agreement with Gadhafi, to leave Libya alone. But the Arab Spring regime change game had to start, and it was Clinton who pledged to her handlers she’d get the job done.

Later, we learned through WikiLeaks of the scandalous Clinton organization, and of adviser Sidney Blumenthal encouraging her to tout her “successful strategy” as evidence of her fitness to serve as President of the United States. God forbid, how many would be dead today on her account if she’d made it back to the White House with Yugoslavia’s un-doer, Bill. Fast forward to today, and the United States is not trusted by any deal. The world of a U.S. politician is absolutely meaningless, no matter how much money is attached. No wonder North Korea is forting up with its nukes. Nowadays Clinton is romping about America signing books for the throng of vagina hat wearing fanatics. And she’s bouncing up and down cheering NBC host Matt Lauer’s firing as “karma” for being mean to her during the presidential debates. I guess the fired The Today Show host had better look over his shoulder from now on for fear of stray bullets and runaway cars. Lord knows Clinton detractors tend to have unfortunate accidents.

I haven’t the time or space here to go over all of Hillary Clinton’s crimes and misdemeanors. The Clinton Foundation money machine, all those under the table deals hinted at by the Podesta emails, the DNC debacle, Seth Rich, God knows what this woman is guilty of really. What we do know is that the media has colluded to assist she and Bill for decades now. Fox News just reported on the alleged FBI cover-up when the agency was looking into Hillary Clinton’s use of a “personal” email server to send, receive and store classified information. The Fox report tells of former President Bill Clinton engineered a meeting with President Obama’s attorney general, Loretta Lynch, on the tarmac of the Phoenix Airport on June 27, 2016. The Trump Dossier that media and congress made so much of, FBI Director Comey is now seen as directly blocking the investigation of Clinton. As I type this, Fox’s Sean Hannity is breaking news about this alleged cover-up. Furthermore, this story via The Hill tells of Maryland’s former chief federal prosecutor, Deputy Attorney General Rod Rosenstein failing to interview the undercover informant in the FBI’s Russian nuclear bribery case before it filed criminal charges in the case in 2014. Uranium One and Hillary – Benghazi and Hillary – the Clinton Foundation and hundreds of millions from foreign governments – the Deep State covering for Clinton – what can we expect next?

I am not sure how Hillary Clinton was ever allowed to enter the American system of government in the first place. She probably sold her soul to the devil. The woman is a pathological liar, a mean manhater, and the most arrogant female politician I have ever seen. Look at her statements via PolitiFact. She never tells the truth! She’s living and breathing proof, America just does not care anymore. Her husband Bill was getting sexual favors from an intern in the Oval Office, and she did not even have the dignity to divorce his lying ass. And the big vagina hat wearers worship still, her dedication to the man she loathes. The woman thumbs her nose at us. She claimed she landed in Bosnia under sniper fire when husband Bill destroyed Yugoslavia for good. She left the security of the people of the United States of America on a home office server.

The Clintons turned the IRS into a “gestapo” against their enemies. Hillary hired private investigators to get dirt on her husband’s “squeezes”, don’t forget “Pay for Play” and the auctions Hillary held on taxpayer purchased items, or Filegate, ties to the Muslim Brotherhood, and Vince Foster’s mysterious death, the aforementioned EmailGate, ChinaGate, TravelGate, Whitewater, PardonGate, Hillary’s cash cows and 9,987 percent profit, more dead Clinton associates, Saul Alinsky, Iranian fundraising cash, endless Clinton Foundation scandals, Benghazi, her Watergate firing, and GiftGate – nobody reading this can name a politician in history with more scandals attached.

This story by the great Christopher Hitchens on Slate sums up the disgust Americans should have when they hear the name Hillary Clinton. At the summit of the psychopath Clinton’s arrogance is Hitchens’ tale of Hillary claiming she was named after the legendary Sir Edmund Hillary, who was the first to ascend Mt. Everest. Hitchens went on describing the pathology of Clinton lying:

“For Sen. Clinton, something is true if it validates the myth of her striving and her “greatness” (her overweening ambition in other words) and only ceases to be true when it no longer serves that limitless purpose. And we are all supposed to applaud the skill and the bare-faced bravado with which this is done.”

The now deceased Hitchens goes on to describe the veritable trailer trash that took residence in the White House, and the sexual deviant and smartass America set on the world. The eloquent journalist went on to stamp into Clinton’s hide the brand of liar, liar, and pitifully inadequate liar when then Senator Clinton wanted the presidency the first time:

“Indifferent to truth, willing to use police-state tactics and vulgar libels against inconvenient witnesses, hopeless on health care, and flippant and fast and loose with national security: The case against Hillary Clinton for president is open-and-shut.”

Right here is where the reader with senses attached should cry, “String her up!” just like in the old days. And others among us should admonish weeping liberals; “Shame on you. Shame on you all for presenting the world such an evil candidate.” Donald Trump would have to have horns and a long spiked tail to be worse than Hillary.

Now tell me, is America “done” or what? When will we redeem ourselves and put this psychopath on trial?