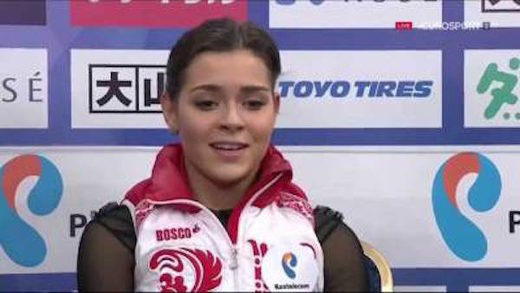 The Winter Olympics are coming around once again, this time in Pyeongchang, South Korea, but the world’s most iconic sporting festival won’t be remembered for excellence and athleticism.

When the International Olympic Committee (IOC) banned Russia from those games, the last vestige of fairness in sport evaporated, and what was a dark cloud looming over the Olympic flame, has mutated into the worst unsportsmanlike conduct you can imagine.

The IOC’s actions against Russia’s atheletes now threatens to extinguish what remains of the flickering dream that once was Olympic competition.

You won’t believe the conclusion of this story.

The Washington Post and dozens of other mainstream media outlets have demanded for weeks that the Russians be banned over largely unproven allegations of doping. This week we see the powerful forces behind such media having clearly influenced the IOC’s decision, and the end of legitimate sport is now in full view for those with eyes wide open.

Putin actually predicted 2 months ago that Russia would be shut out of the Olympics, and that it was a ploy to make him unpopular domestically, and that this ploy will backfire …

When the World Anti-Doping Agency (WADA) demonstrated its “case” against Russia’s anti-doping laboratory initially, most fair-minded people at least questioned the cloak and dagger nonsensical nature of the allegations. One case in point was the sketchy report substantiated by former Moscow lab boss, Grigory Rodchenkov. The whistleblower dropped a dime on a sports cheating operation that supposedly saws athlete test samples spirited out of the Moscow facility via a super-secret Tom and Jerry mouse hole in one of the sampling rooms.

In this version of the team-wide doping switcharoo, trenchcoat-wearing KGB types rolled up to the facility and spirited off into the Moscow fog with the drug-riddled pee-pee. You’ll excuse my sarcasm here, but this is the reality of the witch hunt only intended to besmirch Russia and Vladimir Putin’s administration.

What’s so damnable about the whole situation is that the British spoil-sports in charge of this farce are on the take, just like their American counterparts. What’s more, in the wake of the Rio Games debacle, Jeff Bezos’ Washington Post has led the call to extinguish Russia’s further Olympic dreams. Yes, I believe the world’s richest man took a personal interest in this alongside his liberal world order fraternity brothers.

Let me now frame for you just how this liberal world order gets dastardly deeds done. If you happened to read this story at WaPo by Jared Genser, you might have been led to believe Vladimir Putin personally administered steroids to Russia’s Olympic athletes. Genser does a real hatchet job by simplifying for readers how his version of the Russia doping scandal played out. But rather than rehash this comical account, learning who Genser is will frame the goal post, so I can kick all of western sport through it.

Genser, who’s a Washington lawyer and senior fellow at the Raoul Wallenberg Centre for Human Rights, is connected to vested interests out the kazoo. And everyone knows how Washington lawyers care about fair play and humanity, yeah. Well, the Wallenberg Center is a country club full of Canadian lawyers, judges, and financiers linked to some of Earth’s bloodiest money.

Looking at one entity involved, the Royal Bank of Canada is controlled by the notorious Bronfman family (see the end of the post), and frequently partners with Barclays, Lloyds, Hill Samuel and N. M. Rothschild & Sons. All these names are at play in skullduggery such as the so-called Caribbean Silver Triangle drug trade, and much more.

The connections are like an intricate spider web, as per usual, but the Wallenberg Center board member, Bruce Kent is the head of RBC Dominion Securities. Ironic, isn’t it, how those hell-bent on condemning Russian athletes all seem to somehow hover around real drug crime. Other “interesting” associations exist, including the role of board member Jay Rosenzwei, who’s an advisor to Elon Musk’s Hyperloop Transportation Technologies.

Finally, the Wallenberg Center is headed by Irwin Cotler, Zion’s legal poster boy for the liberal world order’s international human rights diversion. For those of you sick to death of godless Zionists playing puppeteers of the Jewish religion, Wallenberg’s leader has even managed to create six categories of anti-Semitism into a brand-new moniker for Jew-Gentile-Arabic hatred. The theory is called the “new anti-Jewishness.”

So, billionaire technocrats, Zionist bankers, Swiss Nazis, corporate mainstream media, and the Queen Mother’s bean-counting minions with bad teeth seem to have lobbied the Olympic Committee. This makes me think of sports in Orwell’s 1984:

“Heavy physical work, the care of home and children, petty quarrels with neighbors, films, football, beer, and above all, gambling filled up the horizon of their minds. To keep them in control was not difficult….” – George Orwell, 1984

If you’ve read this far, the IOC did not “just” ban Russia from the next Olympics. The IOC was leveraged by the most powerful economic and political forces on Earth to punish Vladimir Putin and Russia. The IOC is being used as a tool to raise tensions inside Russia, to try and disrupt Russia’s system and the upcoming elections. But about now some readers are asking; “How in the hell did we go from Olympic doping to Zionists and new anti-Jewishness?” Well, wouldn’t it be fair play if Russia were not responsible for all the evil in the world? What if the pot that is calling the Russian kettle black is forged of racist Zionist intentions? Now that would be ironic, wouldn’t it?

Turning another page, Lord Sebastien Coe is mixed up in all this. The legendary runner who was accused of using enhancement drugs when he won Olympic gold back in the 70’s, Coe was at a time also accused of rigging races by paying off competitors to lose. Now he is head of the International Association of Athletics Federations (IAAF) that led the charge to sanction Russian athletes before the Rio games. Not many people realize that Coe has made millions for himself and his Bank of England colleagues in a rigged sports show P.T. Barnum would envy. Furthermore, Coe has also been appointed a member of the Tokyo 2020 Olympic Games Coordination Commission representing the Association of National Olympic Committees.

A report by this writer on Our Russia added details to what has become a kind of sports mafia. And another piece I wrote for Pravda details Sebastien Coe’s questionable activities even further. Readers may be interested to know that Coe profited from the Rio Games via a firm called CSM Sport & Entertainment, where he was named chairman in 2012. I’ve no space to profile CSM here, but the company’s expanding tentacles are revealed by employee migration via this LinkedIn profile. Alecia Klein is the new International Association of Athletics Federations (IAAF) Director of Platforms and Distribution, but from 2012 to 2015 she was CSM’s Director of Business Development. Her migration back and forth in between the for-profit sector and world amateur sports organizations shows the endemic control mechanism of the Olympic sphere.

Let’s leave off the further roasting of Lord Coe, and move to showing this whole Russia doping witch hunt was part of a much broader geopolitical strategy to destroy Putin’s government. In the Our Russia story, I framed the timing of the “Designer Anabolic Steroid Control Act of 2014,” which then President Barack Obama signed into law just after Sochi. In this frame the law appears as a preventative:

“I contend DASCA 2014 was intended to rapidly ‘clean up’ American sports, so that the anti-doping scandal we see today would not involve Americans.”

Last week, leaders from 17 National Anti-Doping Organizations (NADOs) recommended that Russia be banned from the 2018 Pyeongchang Olympics based on the state-run doping system and Russia’s “continuing failure in its obligations to clean sport.” On this score, I cannot imagine Vladimir Putin’s people not doing everything humanly possible to comply. After all, he is the soulless dictator who everyone fears!

How the Olympics Died

While the intricate web of high finance surrounding all such international squabbles may seem unfathomable and impossible to trace, the world in which these people live is a relatively small and sometimes smelly one. The financiers associated with the Lord Coe types have put up convincing philanthropic facades to obscure a diabolical inner sanctum.

When the two heiresses of the aforementioned Bronfman billions got affiliated with the NXIVM (a multi-level marketing firm accused of being a cult) enterprise of Keith Raniere, the seedy and promiscuous world of excess and eccentricity revealed many more “players” in this globalist game of domination. I know this is a tangent, but given the allegations of sexual predators from Washington to Hollywood these past months, sadistic cults do bear mentioning.

Reading the decision of the IOC as a result of this Schmid Report (PDF), it’s clear to me that the Olympic organizers have stooped to blackmailing Russia to comply with this onerous decision. I quote from the bulleted list after all banned officials of Russia are mentioned:

“The IOC may partially or fully lift the suspension of the ROC from the commencement of the Closing Ceremony of the Olympic Winter Games PyeongChang 2018 provided these decisions are fully respected and implemented by the ROC and by the invited athletes and officials.”

In other words, Russia bends over and admits by compliance wrongdoing, or else. The whole affair stinks of a U.S. State Department or White House directive. But the hypocrisy and madness get much worse (if you can believe it possible).

Samuel Schmid, who’s a member of the IOC Ethics Commission, is a controversial Swiss politician who stepped down as Defense Minister when his subordinates were forced to step down owing to scandals and accidents in the Swiss military including a top official under him being charged with sexual harassment. Failed politicians, defense as it applies to sports ethics, and the all too familiar sexual harassment shadow! Even I am reeling now.

Finally, a TASS story reveals the utter idiocy of the IOC decision in full. As it turns out, the Schmid Report revealed absolutely no evidence of so-called “state-sponsored doping,” but instead put the weight of the scandal on the man who blew the whistle on Russia, Moscow lab head Grigory Rodchenkov.

That’s correct. Russia just got banned by the testimony of a man the IOC ethics club says helped athletes dope for “financial gain,” and NOT because Vladimir Putin commanded the FSB to switch samples. I don’t know whether or not the fact that Rodchenkov is currently in the witness protection program is meaningful, or not. After reading the detailed report given the IOC, I cannot fathom how Russia was banned from the Pyeongchang Games. The entire Russia doping mess turns out to be a “for profit” venture by a man now in a U.S. witness protection program, along with his co-conspirators.

The “gang,” if I may say so, very closely resemble the legendary 1960s Racehorse Doping Gang or more recently, the famous BALCO scandal. In effect, the IOC is saying that Major League Baseball, the NFL, and the US Olympic Team should have been banned for the criminals from BALCO distributing steroids to athletes.

One thought on “The Olympic plot to destabilize Putin’s government”