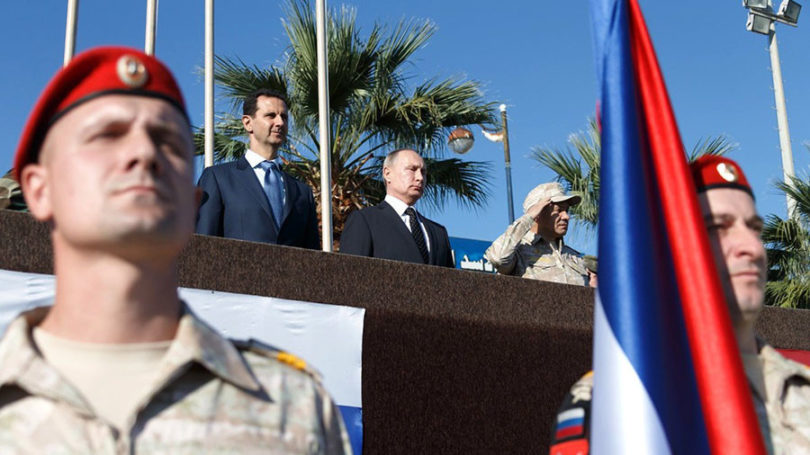 Making a clear-cut end to military operations in Syria in this way only emphasizes what everyone knows, or should know. The Syrian state has been saved from being over-run by a US-backed covert war for regime change, largely because of Russia’s decisive military intervention.

Claims by the US and France it was their coalition forces defeating terror groups in Syria rightly deserve derision. It is obvious to the rest of the world that Russian military intervention, beginning in October 2015, was decisive in turning the war in favor of the Syrian government forces. Allies Iran and Lebanon’s Hezbollah, as well as Iraqi militia, were also crucial in defeating the foreign-backed insurgents.

Putin arrival in Syria’s Latakia province Monday morning to address troops at the Khmeimim airbase conveyed an appropriate air of mission success. Greeted by Syrian President Bashar Assad and accompanied by Russian Defense Minister Sergei Shoigu, Putin thanked the Russian servicemen and women for their valor and said it was now time for the Russian forces to return home.

Russia will still, of course, retain an airbase at Khmeimim and its naval port at Tartus. Putin said his forces would be ready to return immediately if “terrorists ever raised their heads again.”

Winding down military operations serves to underscore Russia’s achievement in securing the Syrian state. It accentuates the coherent mission undertaken by Russian forces, as Moscow has consistently stated for the past two years. That is, deployed at the request of the Syrian government in a legal and principled manner.

Militarily, the objective conditions show the war is over. Apart from diminishing pockets of insurgents, there is no territory, city, town or village under the control of anti-government militants. When Syrian troops liberated Deir ez-Zor weeks ago that breakthrough marked final victory.

With the Syrian Arab Army in control and with Iranian forces vowing to remain in the country, as legally mandated, there is no military need for Russian troops to stay. The country’s security from Daesh and other Al-Qaeda-linked terror groups is largely checked.

As Putin noted, it’s time now to win the peace. A UN-sponsored peace process can be enabled by non-violent conditions on the ground for a political settlement to the nearly seven-year war. As the Russian leader also remarked, Syrian refugees are returning in droves to liberated areas which were once besieged by terrorists.
With Putin also announcing last week he is running for another term as president in elections next year, the success of Russian forces returning from Syria is another important political boon.

But moreover, the strategic, geopolitical import of Russian withdrawal is that it throws into sharp focus the malevolent forces behind this brutal war in which up to 400,000 people died, and millions were displaced from homes, a human tragedy that has dramatically impinged on Europe’s refugee crisis.

Just as Russia withdraws its troops, the Pentagon announces its forces are to remain, and at a level four times what it previously declared. The American-led Operation Inherent Resolve also involves other NATO members, Britain and France.

The presence of US-led forces in Syria has never been convincing. Purportedly they are there to “defeat ISIS (Daesh)” and other terror groups. Such claims are contradicted by evidence of the American CIA and other Western and Arab states giving covert support to the same terror groups. Even Western media cannot avoid reporting the glaring reality of evidence the US-led coalition has been caught providing safe passage to terror groups out of Raqqa.

Washington and Paris have lately tried, somewhat laughably, to belittle Russia’s contribution to defeating the terror groups and winning the war. They have claimed the threat of ISIS and other terror groups remain, and therefore the US-led coalition must remain in Syria.

Russia’s military withdrawal, leaving the country in the able hands of the Syrian army and its Iranian ally, emphasizes the bogus nature of the Western governments’ claims. It also focuses attention on the illegal nature of American, British and French presence in Syria. Those powers have no legal mandate to fly their warplanes over the country or infiltrate their special forces.

If the war is over – and it is – then what are these NATO forces doing in Syria? They are evidently imposters, violating Syrian sovereignty and liable for prosecution as aggressors.

Last week, the commander of Iran’s Revolutionary Guard Corps, Brigadier General Qassem Soleiman issued a stark warning to US forces in Syria. “No American soldiers in Syria will be tolerated. I advise you to leave by your own will or you will be forced out,” said the commander.

Putin’s order for Russian forces to redeploy from Syria is a prudent de-escalation of military traffic. Recently, there have been reports from the American and Russian sides of increasing risk from warplanes colliding.

It doesn’t make sense for Russian operations to continue in Syria when the task of defeating the terror group is substantially complete. Continuing Russian air operations is just a waste of fuel. It also gives the American a cynical opportunity to create a confrontation – under a phony pretext of “protecting” its ground forces among residual Kurdish and Arab fighters.

It’s better therefore for Russia to call a clear withdrawal from Syria. That lets the world see who the real victors in the Syrian War are. It also exposes – more than ever – the deeply pernicious role played by the US and its NATO allies.

The US mission in Syria is an impossible mess, just as it has been in other countries, from Afghanistan to Iraq, Libya to Yemen. It’s impossible because it is riven with lies and false objectives. There has been no credible fight against terrorism. It has instead been an American and NATO fight with terrorism for a criminal objective of regime change.

Leaving the American forces to stew alone in Syria for no inherent good purpose, only for fraudulent objectives, will highlight another US-made criminal mess.

Russia can rightly claim a military, political and moral victory in Syria. The victory is clear-cut, along with the valiant efforts of Syrian, Iranian and Hezbollah allies.

There’s no need to linger when the mission is a success. Not only is it fitting that Russian forces bow out with dignity and pride. It is also fitting that US forces are left behind to illustrate their culpability in trying to destroy yet another Middle East country – and failing.

Granted, there is a danger the US military could still try to destabilize Syria. Washington’s machinations might try to rekindle an insurgency from the dregs of routed proxies. That’s possible, as is the regrouping of the terror networks to infest some other unfortunate Mideast country targeted for US-led regime change.

Though it’s improbable as a future threat to Syria, given the scale of defeat to the US-led proxy war forged by Russia.