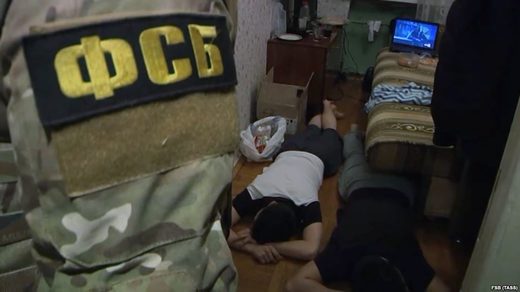 Something surprising happened yesterday. Russian President Putin publicly thanked US President Trump for helping to prevent a major ISIS-linked terrorist attack in St. Petersburg. The CIA had provided intelligence to their Russian counterparts, enabling the Russians to find and detain the seven individuals planning the attack and coordinating with “ISIS masterminds” abroad. The raid occurred last Wednesday and Thursday, during which the FSB seized explosives, weapons and ammunition, extremist material, and dismantled a bomb-making workshop.

The Kremlin press service issued a statement on the call Putin made to Trump:

“The Russian president thanked his US counterpart for information shared by the US Central Intelligence Agency (CIA) that helped trace, expose and detain a group of terrorists who had plotted explosions in St. Petersburg’s Kazan Cathedral and in other crowded places in that city,” the press service said.

Putin then reassured Trump that he would reciprocate information sharing if Russian security services knew of any leads.

“Russian security services, should they have information about possible terrorist threats to the United States and its citizens, will swiftly and unconditionally share it with the US colleagues via partner channels,” the press service stressed.

Putin asked Trump to pass on his thanks to CIA Director Pompeo and the agents/analysts who gathered the relevant intelligence.

The White House for its part released the following statement:

“President Trump appreciated the call and told President Putin that he and the entire United States intelligence community were pleased to have helped save so many lives.” The White House also confirmed that US intelligence agencies provided Russia with information “concerning a major terror plot in St. Petersburg.”

The statement also added that Trump stressed that intelligence cooperation is needed to “defeat terrorists wherever they may be.” Trump and Putin agreed that this example of information-sharing “serves as an example of the positive things that can occur when our countries work together.” Putin spokesman Dmitry Peskov reiterated this understanding today, saying the tip-off “helped save many lives” and should serve as an example of what productive U.S.-Russian cooperation can do:

“Certain contacts between the two countries’ intelligence services take place sporadically, but in this case there was extremely effective information that helped save many lives,” Peskov told reporters in a regular conference call. He called it an “exemplary illustration of cooperation in the fight against terrorism” and said that “these are the standards we should strive for.”

As for the suspects detained, one has been identified as Yevgeny Yefimov, who says he was responsible for preparing the shrapnel-packed explosives:

A St. Petersburg court on December 17 ordered three of the suspects to remain in custody until January 14, Russia’s state-run RIA Novosti news agency reported. Two of the men are from Russia’s southern North Caucasus region, while the third is from the ex-Soviet republic of Tajikistan in Central Asia.

The press service for St. Petersburg’s court system said the three men deny the allegations and claim that “weapons were planted on them.”

Yefimov and a fifth suspect — Anton Kobyets — were previously ordered to remain in custody by a St. Petersburg court.

The status of the other two suspects cited in the FSB statement was not immediately clear.

What is remarkable about this is not only that the CIA helped the FSB, but the public acknowledgment that the CIA helped the Russians. The CIA is not popular in Russia, to say the least. I assume the sentiment is mutual. And there is also the suspicion among many in Russia that the CIA has been active in supporting terrorist groups in Russia’s North Caucasus and in the ex-Soviet Central Asian nations. Putin publicly suggested as mucha couple of years ago. He said something similar at the annual St. Petersburg Economic Forum in 2016. (Mind you, FBI whistleblower Sibel Edmonds has been saying the same thing for years.)

So how exactly did the CIA know about this plot, which the Russians were seemingly unaware of? NSA intercepts? Were these terrorists tied to some U.S. agency, perhaps even the CIA? If so, were they ‘thrown to the wolves’ as an overture of sorts to the Russians?

This is the kind of cooperation that Trump has wanted – and partially what he ran his presidential campaign on. It’s one of the big reasons his establishment critics are targeting him with trumped up ‘Russian collusion’ allegations. Did the Russians provide similar information to the Americans on a previous occasion? (We know they did this in regard to the Boston Bombers, but their warnings were ignored.) The Saker offered some similar guesses today:

My first one would be that the bombers were somehow connected to the USA or to some branch of the US government and that the CIA decided to warn the Russians to spoil an operation by another branch of the US government. Maybe the risk of having some US agency clearly involved was too big. Other option: the US CIA and/or the Trump Administration really want the Russians to cooperate with them on something important, and preventing a terrorist attack in Russia’s “northern capital” was a way to show that the US and the CIA have some potentially very real benefits to offer Russia. After all, relations between the USA and Russia have been so insanely bad (all the USA’s fault) that some tangible sign of mental sanity and actual good-will could make things way better than they are now.

It is also possible that somebody in the White House has finally realized that the US has truly painted itself into a corner and that a country like Russia could be very, very, important to fix the utter disasters of US foreign policies (or lack thereof) in the Middle East as East Asia. It is also entirely possible that, as the RT article indicates, the Russians recently helped foil a major terrorist attack in the USA and that the Americans decided to reciprocate. Finally, as remote as this might seem to some, there is always the possibility of a key person in the administration taking the decision to simply do what is right. I know that many will call me naive for even considering such an apparently unlikely possibility, but I strongly believe that there are decent people in some very corrupt places and that sometimes very corrupt people sometimes want to do what is right at least once.

Whatever may be the case, I welcome this development. Lives were saved, some dangerous maniacs are behind bars and two nuclear nuclear superpowers did something together and did it right. I am not holding my breath for the future, but any positive development deserves some recognition, especially in our otherwise very depressing times.

Amen to that. Russia and the U.S. do not have to be enemies. The fact that they are makes the world is a worse place. And that is entirely the U.S.’s fault. Their Russia policy has been completely irrational since Putin came to power and put an end to the Yeltsin years of making Russia a destitute vassal state with no national sovereignty. Russia will not revert to that status anytime soon – even though Western establishments cannot accept that fact. The only alternative to perpetual enmity and proxy warfare is to take the sane approach: cooperation. The Russians have consistently shown they are willing to let bygones be bygones. It’s past time the U.S. took them up on this offer. And in that regard, this intel-sharing is indicative of a step in the right direction.