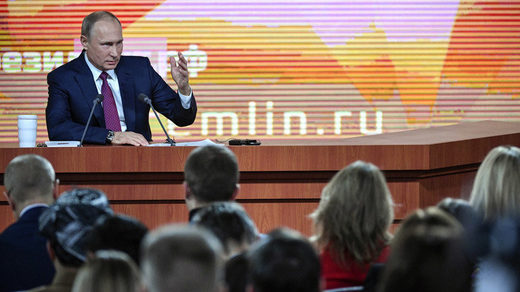 Russian President Vladimir Putin held his annual marathon press conference today. Over 1,600 journalists were accredited for the event, which ended up lasting just under four hours.

The entire ritual just demonstrates how far Russia still has to go before it becomes a full-fledged Western democracy. In a real democracy, leaders only take pre-approved soft-ball questions from a select group of hand-picked journalists and then read their answers from teleprompters. Tough or unexpected questions are either ignored or given a pat answer devoid of any real information. After 20 minutes or so, that’s a wrap. Under no circumstances are leaders to field countless questions from a range of sources, and extemporaneously provide detailed answers on a wide range of subjects. Sound about right?

Actually, the reason Western leaders don’t do such things is because they’re simply incapable of it. They don’t have a command of all the facts and figures. They know their ‘policy positions’ are just slogans and sound bites made up for public consumption, so their answers are never in-depth or backed up by anything of substance. And they know the justification for the ‘party line’ is based on a foundation of deceit and lies, so they can’t give adequate space for facts or other points of view. When you’re following a script, you can’t be spontaneous. Putin, on the other hand, can do so because he’s something all his Western ‘colleagues’ are not: a real leader.

What follows are some of the highlights of today’s Q&A. Check back for updates as they come. Here’s the full video, if you have 4 hours to spare:

Some of the high points so far…

Kind words for the US administration, and a reminder that Trump is ‘constrained’ by ‘known limitations’:

“There are things [Donald Trump] would like to do, but so far couldn’t, meaning healthcare reform and several other issues. He’s spoken about improving relations with Russia. It is obvious, that even if he wanted it, he is unable to, due to known limitations,” the president said Thursday.

“I don’t know whether [Trump] still wishes [to improve relations with Russia] or whether this desire is completely exhausted,” Putin continued. “I hope that he does and, after all, [I trust that, in] the interests of the American and Russian people, we will eventually normalize our relations, develop them and will fight common threats.”

“These are well-known: terrorism, solving ecological issues, battling against proliferation of weapons of mass-destruction, overcoming crises in different regions, including the Middle East and the North Korean problem,” the Russian president said.

When asked to assess Trump’s work after nearly a year in office, Putin said it wasn’t up to him to evaluate. “That needs to be done by the voters, the American people,” he said. But Trump still has reached some of his goals, Putin believes. “We objectively see some quite significant achievements, given the short period of time [Donald Trump] has been working. Look at the how the markets have grown. It indicates investors’ trust in the American economy.”

On the US DoJ forcing RT and Sputnik to register as ‘foreign agents’:

“Their [RT’s and Sputnik’s] share in total amount of information is miserable compared to what American global media does across the world, and in Russia. Yet it seems to be a threat [to Washington]. But where is the freedom of information, one of the cornerstones of American democracy?“

Russian meddling in US elections is “spy mania” – Putin believes

Vladimir Putin described the accusations of Russian interference in US presidential elections and Washington’s attitude to the Russian media as “spy mania” and “delirium”.

According to Putin, there is a worldwide practice when diplomats meet with representatives of different candidates in other countries and discuss with them issues of developing bilateral relations. And he does not understand why in the United States this has acquired the character of spy mania.
…
The head of the country summarized that it was necessary to draw conclusions from this and continue working together, “rather than pounce like animals on each other.”

On the US breaking key treaties affecting global nuclear balance, presenting a mortal threat to all life on Earth, something he reminds everyone about every chance he gets:

US has de facto left missile treaty, Russia will not

“We hear talk about the problems of the Intermediate-Range Nuclear Forces Treaty. Apparently, conditions are being created and an information-propaganda campaign is being run for a possible US withdrawal from the threat,” Putin stated.

In fact, US withdrawal has already started and there is “nothing good about it” if this process continues, Putin said, adding that Russia is not going to withdraw.

Putin said that missiles from the US ballistic defense system deployed in Romania, which are based on AEGIS missiles, can easily be converted to middle-range projectiles.

“We hear that it [the treaty] is unprofitable and unnecessary for them [the US]… If the US once again unilaterally withdraws, it will be very bad for international security,” the Russian leader said. He added that Moscow is not going to leave the deal, but will develop its army and fleet.

On the 2018 Russian presidential elections:

“This will be a self-nomination,” Putin said.

“I expect to have support of those political forces (parties and public organizations) that share my view on the country’s development and trust me. I certainly expect this very much,” he said.

“I expect a widespread support of the Russian citizens,” the president added.

On the presence of Chechen military police in Syria:

“It was my idea to send Chechen forces to Syria”

The head of state reminded that it is mainly Sunnis who live in the North Caucasus, that’s why the Sunni population of Syria trusts them.

“They trust their authority because they are Russia’s servicemen, and the local population, regardless of political preferences, trusts them, because they are Sunnis.” And it turned out well,” Putin said.

According to Putin, they are very courageous guys. Putin said that they “behaved in a disciplined manner”, felt the responsibility they had, and fulfilled their duty with dignity, representing the interests of Russia.

When asked by a Polish journalist about the 2010 plane crash that killed many high-ranking Polish politicians, including their president, regarding possible Russian involvement, Putin responded:

“We are tired of such bluff, we’re just tired, it’s weird and some kind of nonsense,” the Russian president said, responding to a Polish journalist’s question during the annual live Q&A press conference today.

The head of state reminded his audience that experts have repeatedly answered the question about a possible explosion on board the liner.

“There were no explosions, it was all studied by experts from both the Polish side and the Russian side. In a very careful manner, everything that happened inside the aircraft was inspected,” Vladimir Putin said.

If we assume the possibility of an explosion, the Russian leader continued, it is worthwhile to look for the cause where the plane took off.

“Did the plane take off from Moscow or from Warsaw? Where would it have been planted? Look there I suggest,” Putin said.

On Monday, Putin made his first visit to Syria to meet with Assad and announce the withdrawal of the bulk of the Russian military force stationed there. He took the opportunity today to speak of air security measures, and to thank the military servicemen who provided protection:

On security measures for his flight to Syria

“The pilots, those guys, I watched them. They were not just flying nearby – during landing, they descended to be flying below our plane,” Putin said. He explained that the maneuver was a dangerous one for the pilots of the fighter jets, but they chose to provide cover for the presidential plane.

“I am thankful to them and want them to hear and know that,” Putin said, adding: “Although, I’m not sure there was a necessity” for such extra security maneuvers. The president also thanked the Russian military on the ground who safeguarded his plane – “which might be a target for SAMs [surface-to-air-missiles], especially during take-off and landing.”

“Is the government willing to help the pro-life movement?” Putin is asked. “I’m grateful for you to ask about this, it’s important,” Putin says. “I’ll repeat what I said at a recent meeting. As far as abortions, in most modern countries today, it is up to the woman to make this decision. “If there was a total ban, we’d eventually have a criminal trade in this – women would go abroad, there would be illegal abortions… it does immense damage to women’s health, so we have to be careful. We are willing to support pregnant women, of course,” Putin adds. The president then lists new plans for benefits for families with children and maternity benefits.

On US support for terrorists in Syria:

“In Syria, all the parties involved should resist the temptation to take advantage of short-term political goals. We see that terrorists are escaping Syria to Iraq and the US doesn’t hit them because they may want to use them later against [Syrian President Bashar] Assad… That’s very dangerous.”

On the presence of Donbass militias:

Putin returns to the aggressively-addressed question on the Russian role in Ukraine. “There are local militia groups in Donbass ready to counter-attack in the area… we agree with this.Without these, Ukrainian nationalist battalions would start a massacre like Srebrenica there,” Putin says.

On the Russian military budget:

“We will not be dragged into an arms race.”

“The Arctic will make Russia rich – that’s where the resources are.”