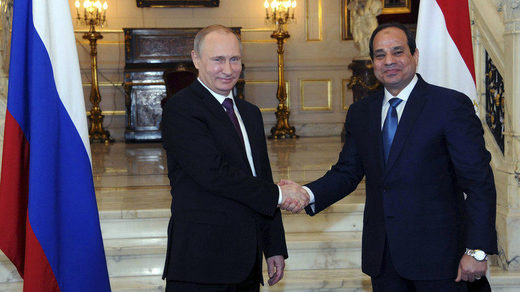 Russian President Vladimir Putin has met with his Egyptian counterpart AbdelFattah el-Sisi in the Egyptian capital Cairo to discuss a broad range of bilateral and regional issues.

This follows on from Egypt certifying an agreement allowing Russia to use Egyptian air bases for regional activities for the foreseeable future.

Both Presidents praised an increase in bilateral trade, while Putin spoke favourably about investment projects in Egypt which will total $7 billion.

Sisi stated that both leaders held talks about the importance of establishing a special Russian economic zone on the Suez Canal which Putin later said would be the main Russian terminus for the distribution of Russian goods throughout the Middle East and North Africa.

Both leaders were in agreement in respect of their position on Donald Trump’s move to recognise Jerusalem/Al-Quds as the Israeli capital.

Sisi called the move “reckless” and affirmed that Egypt’s position is that the United Nations is the only proper place to settle the Israel-Palestine conflict and that at all times any proposed solutions must be in line with international law.

Sisi expressed his appreciation of Russia’s efforts to help with the peace process.

Sisi also praised Russia’s role in finding a lasting peace for Syria. Sisi stated that Egypt supports the Syrian de-escalation zones as well as the Syrian National Dialogue Congress to be held in Sochi next year.

The Egyptian President further affirmed his country’s support for Syria’s territorial unity and for a peaceful multi-national cooperative effort to end the worrying situation in the Libyan failed state, following on from NATO’s disastrous 2011 war on Libya.

Putin stated that Russia is ready to restart direct flight from Moscow to Cairo in a move which will re-establish the longstanding Russian tourism industry in Egypt.

Turning back to Palestine, the Russian President described Donald Trump’s move (though without using Trump’s name) as “counterproductive”. He further stated that such moves “destabilise the situation” and push the region further from a lasting peace.

“We consider counter-productive any moves that pre-empt the result of negotiations between the Israelis and the Palestinians.

Such steps are destabilising, and don’t help the resolve the situation, but instead provoke conflict”.

Putin thanked Sisi for his support for Russian efforts in Syria, Palestine and stated the importance of working together to bring peace to Libya.